“It seems that the killings committed by you alone are hundreds or thousands times more than those killed by hundreds of yangbans.”

Hanul was completely different from the other gods.

The absolute gods Rebecca and Yatan were simply beings that moved like clockwork according to their instincts. The subordinate gods such as Hexetia and Zeratul were buried by their own desires and simple feelings. Meanwhile, Hanul understood and attacked humans. It was as if he was human.

Grid felt a chill as the sins of the heart he had been carrying for a long time were revealed. He was afraid of Hanul, who shut him up using human standards. It was creepy that a god who understood humans so well deceived humans and used them as tools to establish the yangbans as gods. Additionally, he created missions to kill people in large numbers. It would’ve been a disaster if he was only faithful to his instincts like Rebecca and Yatan, but Hanul felt like a psychopath with a weapon in his hand.

Were his thoughts read? Hanul looked at Grid like he was a child. Hanul’s gaze seemed to be mocking Grid and telling him that he was no different.

[The absolute Hanul is asking about your sins.]

[Sinners aren’t entitled to speak. This will last for 3 minutes.]

[All skills and magic are sealed.]

[The source of the myth ignores your status. Resistance has failed.]

[The sinner is filled with anxiety. All stats are reduced by 30% and your weak spots will be exposed for three minutes.]

[The source of the myth ignores your deity stat. Resistance has failed.]

There had been rumors floating in the community recently. It was said that there was a ‘legend attack strategy.’ It was said that hitting a target with six specific types of status abnormalities within one second would neutralize the legendary class’ resistance to abnormal statuses. However, Grid had sneered at it. He thought that the resistance couldn’t be neutralized in such a way, but he could no longer ignore it.

‘Why did I fail to resist the abnormal state every time I do something?’

Every time Grid failed to resist an abnormal status, he felt that there was nothing absolute in Satisfy and became worried that the rumored legendary attack strategy was also true.

“Poor apostle Zik, it is impossible for you to revive the seven good people on your own.”

The grandmaster shouldn’t grab Hanul’s hand. If he grabbed Hanul’s hand then the stigma of the seven good people would never be removed. Grid wanted to cry out, but the words hovered in his mouth. The weight of Hanul’s sin pressed shut his mouth. It was a moment of frustration for Grid who thought the grandmaster would be shaken.

A large, warm hand covered Grid’s shoulders. It was the grandmaster’s hand.

The clear eyes that confronted Hanul turned to Grid.

“Here is a person who will help me along with my apostles.”

Why? On what basis did he trust and rely on Grid so much? It was a big question for Grid who didn’t know the grandmaster’s thoughts. Still, he couldn’t help smiling. He was relieved that the worst case scenario of the grandmaster holding hands with Hanul was avoided. He also felt joy that he was trusted for some reason.

“Why are you going to walk such a difficult road?” Hanul asked the grandmaster. His hard to recognize face still seemed to be smiling gently.

The grandmaster answered, “The moment I take Hanul’s hand and choose the easy path, it feels like I will enter the wicked path.”

“Walking with me is the wicked path...”

The smile disappeared from Hanul’s face. In an instant, a huge pressure burst out and Grid found it hard to breathe. Zibal and the Neo Red Knights instantly fell unconscious.

It was so overbearing that even the grandmaster had to take a step back.

“Do I look wicked in your eyes?”

“Not at all. I only had a brief conversation, but how can I use the standard of good and evil on a god?”

“Then why are you worried about going down the wicked path with me? I understand humans better than any other god, so I am the only god who can live with humans. I am the only one in the world who can meet the expectations and wishes of you, who has fought against the gods for humanity.”

It was a voice filled with confidence—Hanul sincerely seemed to think so. The grandmaster was attracted for a moment, but then he shook his head.

“I don’t want a god who lives with humans. I want a god who can watch from a distance and protect humans when they encounter disasters that can’t be confronted with their own strength.”

Yatan, who used some pretext to destroy the world. Rebecca, who watched the world being destroyed by Yatan. Hexetia, the god of blacksmithing, who was jealous and envious of humans. Zeratul, who wanted to spread his greatness to humans. Dominion, who fell in love with a human and was thus betrayed. All the gods the grandmaster had witnessed were far from the ideal god he thought of.

Seeing the grandmaster firmly convey his will, Hanul opened his mouth, “In other words, do nothing and only come out to help when humans are in a crisis?”

“Do you want a favor without a price? It doesn’t seem worth it from a god’s perspective.”

“It is like you are saying that a god’s duty is to show benevolence.”

“I think it is a natural duty. The reason why humans worship the gods is because they want benevolence.”

Hanul told the grandmaster, “I existed from the age of chaos before humans were born. Don’t you think it is too greedy to claim I have this duty to humans?”

“Don’t you think that it is only after humans were born that you could be worshipped and accumulate divinity to reach your current power?”

How dare he disregard Hanul’s words? In the end, the three Sas couldn’t stand it and rose from their seats. All of them had been in an unpleasant mood since hearing the grandmaster’s nonsense that gods existed only for humans.

“I think I know why the ugly gods of the west placed a sin on you.”

“Your argument is too one-sided. It is excessively greedy. The god you want doesn’t exist.”

The grandmaster shut his mouth. It wasn’t because Hanul asked for his sin like he did with Grid. In fact, the Grandmaster wanted to ask.

‘A god exists due to human desires. Why deny doing anything for humans?’

The reason he didn’t ask was because there was no meaning. The grandmaster recalled the conversation he had with the gods of Asgard and bowed his head with a sorrowful expression.

“It is a wish beyond the subject. I’m sorry. I will leave.”

The ancient runes rose and wrapped around the bodies of Zibal and the Neo Red Knights. The group who lost consciousness from Hanul’s overbearing presences all woke up and rose. The grandmaster was trying to leave with the group when Hanul’s question struck his back, “Haven’t you just been watching humans? Have you been fighting for humans?”

In the distant past, he fought for the gods. Then in the past hundreds of years, he used humans in the name of resurrecting the seven good people. Sometimes he killed many people. It was a shameful past. The grandmaster knew that he already wasn’t a good person.

“Do you think you are qualified to wish for a god that exists only for humanity?”

“That is why gods exist.”

Pungsa shouted loudly and a storm was created. The lake around the pavilion formed ripples and turned into a whirlpool.

Zik and the Neo Red Knights realized they would be swept away by the whirlpool and gulped.

Hanul restrained Pungsa and Pungsa stopped. The swirling lake became silent like everything previously was a lie. Subsequently, another wind split the lake in half and created a path for Grid and the grandmaster’s group. Hanul left some final words to the grandmaster who was stepping on the path, “The god you want doesn’t exist.”

The yangbans neglected Grid and the grandmaster’s group after they left the place where the gods gathered and returned to the palace. The news that the grandmaster dared to reject Hanul’s hand had already spread. Some yangbans showed open hostility.

Grid, Zibal, and the Neo Red Knights looked down as they walked. It was because they knew something would happen if they were caught looking once. It happened as they were about to reach the entrance of the palace...

"I want to see your combat skills.”

The group was passing through the gate when a voice was heard. The group knew who he was without even looking at his face.

It was due to the bell sound. A man whose hair was tied up with a string of bells—it was the martial god, Chiyou, who previously sat on the stairs of the pavilion. It was as if he knew the grandmaster would come back. He stared at Grid as he blocked the group’s path.

“I wonder if you can overcome the trials that I made.”

Chiyou’s Test—it was the first gateway the yangbans had to pass to become a god. Naturally, there was a strong resistance from around them. The yangbans who were staring at Grid’s group started to protest.

“You are going to give Chiyou’s Test to a mere human?! Are you mocking us yangbans?”

Chiyou lightly dismissed the screams of the yangbans.

“How about it? It isn’t a bad suggestion for you.”

Chiyou’s attention was focused only on Grid. In the end, some of the yangbans stepped forward.

“If you want to give the human a chance, then give us a chance as well.”

The flustered Grid also accepted with a serious expression, “I like it too.”

Not only was there no reason to refuse such a good opportunity, the yangban Haejin was included among the yangbans who would go through Chiyou’s Test.

Sorry for all the term changes lately, I've been going back and looking at some terms that I could've translated better or whose translation I decided when I didn't have enough information.

Pagma's Swordsmanship is one I wanted to change for a while but didn't have time to fix (then I realized Wuxiaworld has an auto find and replace function so I don't have to manually change everything).

I decided on Pagma's Swordsmanship because the last character of the word in Korean could have multiple meanings and I wasn't...

Author has uploaded a new cover of Overgeared. I do like this one but I kinda feel that I should keep a cover with Grid on it. Upvote my comment below if you want to change it to the new one or downvote if you want to keep the old one. 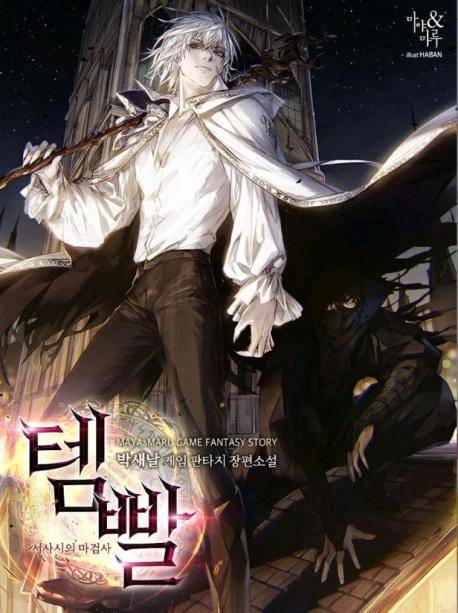 Check out the VIP sponsor page on Wuxiaworld if you are interested in getting access to advance chapters.

Sorry for all the term changes lately, I've been going back and looking at some terms that I could've translated better or whose translation I decided when I didn't have enough information.

Pagma's Swordsmanship is one I wanted to change for a while but didn't...