Nie Tian spent the next two days in the bamboo forest.

During this time, he caught up with Nie Donghai and Nie Qian and talked to Dong Li.

As for the women that had come from all over the Domain of the Falling Stars harboring various intentions, he only met a handful that he was familiar with and shut his door to the others.

Two days later, he went to the mountain peak behind Cloudsoaring Mountain to meet Wu Ji.

Wu Ji was sitting in the lotus position in his hut on the mist-wreathed mountaintop, as if he were in a different space and time. As Nie Tian approached him, he had a feeling as if time was being reversed, and his past started to flash before his eyes.

Therefore, he stood there and waited. Only after a long time did Wu Ji awake, as if his soul had finally come back from a distant journey.

Wu Ji smiled warmly as he opened his eyes. “You’re back. I’ve heard about what happened in the Realm of Mystic Heaven. I also didn’t expect that it would be you who finally defeated the outsiders by activating the grand spell formation left by the Ancient Fragmentary Star Palace with your fragmentary star marks.”

“I didn’t know I would either,” Nie Tian said. “It’s hard to believe that even though the Ancient Fragmentary Star Palace has disappeared for thousands of years, their spell formation is still secretly protecting the Realm of Mystic Heaven.”

Wu Ji took a small book from his inner pocket and handed it to Nie Tian. “Here, this is the book I told you about. I spent a long time collecting this information. I hope it’ll prove useful to you. You can stay here and go through it. Ask me if there’s anything you don’t understand.”

Nie Tian grabbed the book but didn’t start reading right away. Instead, he said, “Master, I managed to restore Bloodline Crystal Chains to the Bone Blood Demon’s heart with my Blood Essence in the Realm of a Hundred Battles. I didn’t know that my Blood Essence actually had such a profound use.”

Wu Ji’s eyes lit up as he said, “Your Blood Essence carries the profound truths of life power, which is very rare. Even I don’t know much about it. You’ll probably have to see for yourself as to what kind of bloodline talent you’ll awaken and whether you’ll be able to enter some magical realm with the help of your bloodline to deepen your understanding of your bloodline power and mastery of your bloodline magics.

“The book only records the features of the commonly seen outsider races’ bloodlines.”

Afterwards, he didn’t ask any more questions, but rather read the book Wu Ji had written for him wholeheartedly on a large rock atop the mountain peak.

Wu Ji had notified Jiang Zhisu that no one should come to the back mountain during this time.

Jiang Zhisu understood his concerns and thus informed all those who had come to the Cloudsoaring Sect to visit Nie Tian that Nie Tian was in the middle of secluded cultivation, and sent them back politely.

Therefore, Nie Tian studied the thin book about outsider bloodlines without any distractions from the outside world.

Even though the book only had a few dozen pages, it carried Wu Ji’s deep understanding of outsider bloodlines, which turned out to be very eye-opening for Nie Tian.

It said in the book that the advancement of outsiders’ bloodline power was closely related to the refinement of their fleshly bodies.

Only when their fleshly bodies were strong enough would they gain rapid growth in their bloodline power.

The awakening of their bloodline talents also, to a large extent, depended on the refinement of their fleshly bodies.

At the same time, many of the outsiders’ bloodline talents had the effect of strengthening their fleshly bodies, which would form a virtuous cycle.

That was why most outsider races possessed fleshly bodies that were much tougher than those of humans.

Outsiders gained the majority of their various bloodline magics by awakening their bloodlines, which was thanks to the accumulation of their clan ancestors.

Only a few outsiders would have the opportunity to enter some mysterious spaces, where they could pick up divine bloodline magics left by ancient monarchs of their races.

Meanwhile, outsiders could also stimulate and magnify their bloodline power with tools. However, human spiritual tools couldn’t achieve such results.

Therefore, according to Wu Ji, no spiritual tools forged by humans would allow him to display his bloodline power to the fullest.

However, the Flame Dragon Armor might be an exception.

Nie Tian had discovered from his previous experience that not only would the Flame Dragon Armor take it upon itself to channel flame power from him, but it had also shown a great demand for flesh power.

Meanwhile, he had picked up his Rage Punch, Heavenly Wood Thorns, and the tree branches from mysterious realms where mighty outsiders used to live.

All of these magical items and powerful incantations could be stimulated by his flesh power, which contained the profound mysteries of his bloodline.

It also said in the book that, as the essence of outsiders’ blood and qi, Blood Essence could be used to strengthen bloodline talents and form different bloodline magics.

It was just that Nie Tian tried the common Phantasm and Demon bloodline magics recorded in the book, and discovered that he couldn’t get them to work.

He speculated that it was because his bloodline was different from Phantasms or Demons. Therefore, he couldn’t use the Blood Essence he had formed to activate those bloodline magics.

Wu Ji also pointed out to him that he should emphasize the refinement of his fleshly body, and at the same time, continue to use his flesh power to nourish the Flame Dragon Armor and other tools he might have that could be infused with flesh power. Furthermore, Wu Ji told him that it was possible that, when his bloodline power built up to a certain level, he might have a chance to enter the origin of his bloodline to find powerful bloodline magics that agreed with him perfectly.

Nie Tian went through the book about a dozen times until all of its contents were branded in the depths of his soul, and then he burned it.

He spent the following days refining his internal organs with the help of Heavenly Wood Heal and the Wood Thriving Formation.

There was still a corpse of a seventh grade Phantasm in his ring of holding. Even though the Bone Blood Demon had drained it of its blood, it still contained a copious amount of flesh power.

Therefore, it served as a source of flesh power that he used to refine his internal organs.

With Life Drain, he channeled some flesh power from the Phantasm corpse and then used it to finish a round of refinement of his internal organs with the help of Heavenly Wood Heal and the Wood Thriving Formation. The refinement went on day and night, round after round.

Before he knew it, two months had passed.

The corpse of the seventh grade Phantasm had been drained of its flesh power, and the second phase of Internal Organ Nourishing was complete.

Meanwhile, he remained at the late Greater Heaven stage, since he hadn’t practiced cultivation during this time.

However, his internal organs seemed to have gone through great changes now that the second phase of the Internal Organ Nourishing was finished. His blood flow had become significantly faster than before, and he no longer needed to summon flesh power intentionally in order to penetrate metal and crush rocks.

After seeing Nie Tian penetrating a large rock effortlessly with his bare hand, Wu Ji said with an impressed look in his eyes, “It seems that the intensity of your fleshly body is already at the same level as that of a fifth grade spirit beast. This means even if you’ve drained your spiritual power in battle, you’ll still be able to maintain a high battle prowess.

“Perhaps you don’t even need to wear the Flame Dragon Armor, and you’ll still be able to fend off most attacks with your body alone.

“Little Tian, the cleansing operation in the Realm of Mystic Heaven is over. The major sects from all over the Domain of the Falling Stars have looted valuables that could be piled into a mountain. Right now, they’re discussing rewarding people with them according to their contributions in the victory. Many of the spiritual materials are treasures that can’t be found in the Domain of the Falling Stars.

“They’ve invited you to go there, and I think it’s about time you leave here and go have a look around.”

“Are you going with me, master?” Nie Tian asked.

Wu Ji smiled as he shook his head and said, “I’m not going. But people from the Spirit Condor came to Jiang Zhisu and expressed their strong hope that you’ll make this trip. You’ve made a decisive contribution to our victory. You deserve to go collect your reward.

Nie Tian nodded. “Well, okay. Are there any materials that you want, master? I’ll get them for you.”

Wu Ji laughed heartily as he handed him a list. “I already have a list prepared. These are the spiritual materials that I’ll need for my future breakthrough. Get me some if you can.” 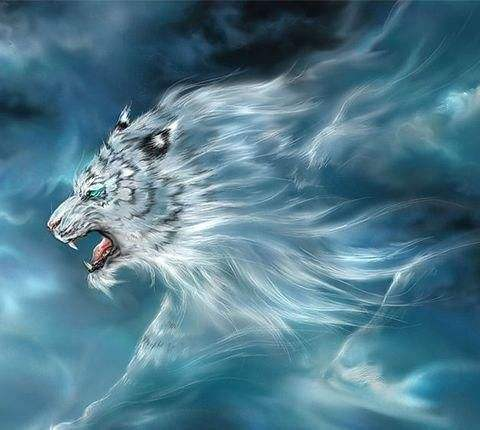 The mythological creature in the West is the White Tiger, and its seven mansions are the Legs, Bond, Stomach, Hairy Head, Net, Turtle Beak and Three Stars. The White Tiger corresponds to the season of autumn. The White Tiger’s element is metal, and it was held to be the God of War. In this capacity, the White Tiger was seen as a protector and defender, not just from mortal enemies, but also from evil spirits.