Nie Tian flew down from the mountaintop on the Bone Blood Demon’s shoulder.

As he did, he glanced down, and saw survivors of different sects piling outsider corpses up after taking their storage rings.

The corpses of powerful outsiders were useful to human cultivators.

Just like powerful spirit beasts, their fleshly bodies were also very tough, and their bones could be used for equipment forging.

Meanwhile, the contents of these outsiders’ storage rings were mostly materials people couldn’t find in the Domain of the Falling Stars. They could be traded for great amounts of spirit stones.

Furthermore, ancient records from the Phantasms and Fiends were also very valuable to sects like the Spirit God Sect and the Poison Sect.

As he flew down, Nie Tian originally harbored the thought of having the Bone Blood Demon absorb the outsiders’ blood.

However, he then realized that, by draining the outsiders of their blood, he would take a big part of their value, therefore undermining the benefit of the sects in the Realm of Flame Heaven.

Even though the Realm of Flame Heaven had ridden out this tribulation, they had suffered heavy casualties. As Nie Tian glanced around, he could see many survivors sobbing, covering their faces.

They were gathered by friends and family who had died at the claws of the outsiders on the Cloudsoaring Mountain and in adjacent areas.

Nie Tian sighed over how cruel inter-race wars could be.

Once the outsiders gained the upper-hand in battle, they would slaughter their human opponents like sheep. They wouldn’t show any mercy.

They were lucky that Wu Ji had displayed his unmatched strength by trapping and killing all of the outsider invaders with his time-manipulating magics.

If the outsiders had scattered to Black Cloud City and other commoners’ cities, the consequences would have been catastrophic.

The Bone Blood Demon landed heavily next to Li Langfeng.

Jiang Zhisu hastily rushed over and asked with a concerned expression, “How is martial uncle? Will he run out of his lifespan soon after this battle?”

Not far from where they were standing, a few elders of the Cloudsoaring Sect were cowering in silence, as if they were afraid that Nie Tian would see them.

“What’s with them?” Nie Tian asked, his brow furrowed.

Jiang Zhisu cleared his throat embarrassedly and said, “Umm... They’re the few elders that weren’t very warm towards your clan. They are afraid that you’ll find fault with them, so they figured they’d better keep some distance.”

With a cold snort, Nie Tian said, “A bunch of clowns.”

Then, Jiang Zhisu’s expression suddenly turned serious as he said, “But don’t you worry. I can guarantee you that the Nie Clan will receive special attention from the Cloudsoaring Sect from now on. This time, I arranged for the members of the Nie Clan to be the first ones to be evacuated to the Green Illusion dimension.

“Even the disciples of the Cloudsoaring Sect went after your grandfather and aunt.

Nie Tian curled his lips as he shot a cold glance at those elders. “Don’t worry, sectmaster. I’m not in the mood to seek trouble with them. If I were, they’d already be dead.”

“Good...” Jiang Zhisu felt somewhat relaxed. “We’ve looted quite a number of items from the outsiders. You’re welcome to take whatever you need.”

At this moment, Li Langfeng seemed to want to speak, but stopped on second thought.

Nie Tian instantly understood what he was thinking, and thus said, “I need some ancient records from the Fiends.”

After he left, Li Langfeng said to Nie Tian, “Many thanks,”

The Fiends’ records of their bloodline magics and their profound use of poisons would be very helpful to him.

The poisonous incantations he practiced were flawed. If those flaws could be fixed, his advancement in cultivation would become faster, and his performance in battle would improve.

“No need to stand on ceremony with me,” Nie Tian said, smiling.

Moments later, Jiang Zhisu returned with a number of scrolls made of animal skin. He handed them to Nie Tian and said, “Here are the records you need.”

Nie Tian grabbed and gave them to Li Langfeng.

Li Langfeng received the Fiends’ scrolls and put them away in his ring of holding in a very respectful manner. Afterwards, he stepped to the side and remained silent.

Jiang Zhisu also left after seeing that Nie Tian had no more business with him.

Shortly afterwards, Li Jing from the Blood Sect descended before Nie Tian on her Blood Lotus.

“Where are the An sisters, Senior Li?” Nie Tian asked.

“They were arranged to wait out this tribulation in an arcane realm,” Li Jing said. “Now that the crisis has passed, I plan to send people to bring them back soon.

“What is it? You want to see them now? Do you want me to take you to them?”

After a moment of hesitation, Nie Tian shook his head. “If they’re in an arcane realm, I’ll see them another time. I’ll come back before too long anyways.”

Aside from Nie Donghai and Nie Qian, An Shiyi was the only one he truly cared about in the Realm of Flame Heaven.

Back when he was growing up, An Shiyi had treated him well, and he had always kept that in mind.

Deep down, he considered An Shiyi an older sister. Now that he learned that she was safe, he felt relaxed.

“So where are you going?” Li Jing asked, looking somewhat surprised. “Now that Zhao Shanling has sealed that spatial rift, this is probably the safest place in the Domain of the Falling Stars. Why would you leave?”

“The same reason I insisted on coming back to the Realm of Flame Heaven, knowing how dangerous it would be,” Nie Tian said. “There are some places and people I can’t abandon.”

Li Jing took a deep look at him, and after a moment of silence, she said, “I see.”

Seeing that Chang Sen, Ghost Eye, and Fang Hui were also gathering to him with inquiring expressions, Nie Tian said to Li Jing, “My master is fine. Tell them not to worry.”

With these words, he sent Li Langfeng a signal with his eyes, and the two of them jumped onto the Bone Blood Demon simultaneously.

In the next moment, the Bone Blood Demon shot up into the heavens.

“Where is he going?” Chang Sen asked confusedly after arriving by Li Jing’s side.

“If Zhao Shanling agrees to help him, where can’t he go?” Li Jing asked.

Chang Sen nodded and muttered, “Good point. From now on, the Realm of Flame Heaven will belong to him and his master. Although, at least that way, those from the other realms will have to think twice before trying anything on us in the future.”

On their way to Zhao Shanling’s teleportation portal, the Bone Blood Demon’s flame of life ran low. Therefore, Nie Tian infused it with more of his blood.

Shortly after the Bone Blood Demon landed close to that river, Zhao Shanling noticed their arrival, and suddenly appeared in front of them.

With a single glance at the Bone Blood Demon, his expression flickered as he said, “That puppet of yours has become even more powerful.”

Nie Tian smiled meaningfully and said, “That’s right, Senior Zhao. This puppet is now at the middle seventh grade, and its strength is roughly equal to that of a middle Soul realm expert. The stronger it is, the more easily it can get that thing you want from that special place, right?”

He was at the early Soul realm, while the Bone Blood Demon was at the middle seventh grade. It might not be easy for him to overtake it in battle anymore.

However, he didn’t fear the Bone Blood Demon at all.

He didn’t even fear the late Soul realm patriarch from the Heaven Palace Sect. Why would he fear a puppet?

The only person he was apprehensive about was Wu Ji.

After all, once Wu Ji unleashed Time Freeze, he wouldn’t even have a chance to escape through a spatial rift.

As for the others, no matter how profound their cultivation bases were, they didn’t have such a formidable ability.

In his eyes, it was laughable that Nie Tian would try to threaten him with the Bone Blood Demon.

No matter how strong it became, it wouldn’t be able to stop him from leaving with his spatial magics.

A disdainful smile appeared at the corner of his mouth as he asked casually, “Where do you want to go this time?”

“The Realm of a Hundred Battles,” Nie Tian answered.

Zhao Shanling nodded, his eyes narrowed. “Sure, but this will be the last time. Consider it a favor that comes with our second deal. I won’t help you again afterwards.”

He was well-aware that people like Zhao Shanling would never follow him around and take orders from him. The fact that he had taken him to the Realm of Flame Heaven and sealed the spatial rift was all business.

“Let’s go.” With a wave of his hand, the river split open, and a deep crack appeared in the bottom of the river. Inside, the secret teleportation portal appeared.

Nie Tian stored the Bone Blood Demon in his ring of holding before entering the teleportation portal with Li Langfeng under Zhao Shanling’s instructions.

In a mountain valley in the Realm of a Hundred Battles, loud rumbling sounds came from the earth. In the next moment, the earth cracked open, revealing a secret teleportation portal.

Nie Tian, Li Langfeng, and Zhao Shanling then jumped out of it.

Before Nie Tian could unleash his Heaven Eyes, the tips of Zhao Shanling’s eyebrows rose as he said, “The situation here is much worse than in the Realm of Flame Heaven. But what is it to me even if the Domain of the Falling Stars falls into the outsiders’ hands? I’ve long since been sick of this damned place.”

Nie Tian summoned the Bone Blood Demon from within his ring of holding and jumped on it with Li Langfeng. Then, Zhao Shanling pointed out the direction of the Dong Clan for them, and they flew off.

Zhao Shanling didn’t go with them. He remained in place after the teleportation portal once again sunk back into the earth. Eyebrows furrowed, he examined the situation in his surroundings.

As the Bone Blood Demon sped through the sky, Nie Tian’s Heaven Eyes spread out with him at the center, reflecting everything on the ground in his mind with great clarity and detail.

Soon, his expression grew grimmer and grimmer, and his temples started to throb.

The nine sons of the dragon:

The nine sons of the dragon are Chinese dragons who are the mythological sons of the Dragon King. There are many variations in the different descriptions of the nine sons, including in basic facts like their names, but all versions state that there are nine.

Here's a short video that briefly introduces the nine sons of the dragon: https://vimeo.com/amandapiel/9sonsofthedragon

I'll take the next few days to introduce them to you one by one and show you their pics.

Bixi (贔屓, pinyin: Bìxì), the eldest son, who is often depicted as a dragon tortoise. The hard shell of the turtle represent resilience, toughness, also longevity and good fortune. Bi Xi can be often seen at the bottom of pillars and building foundations. 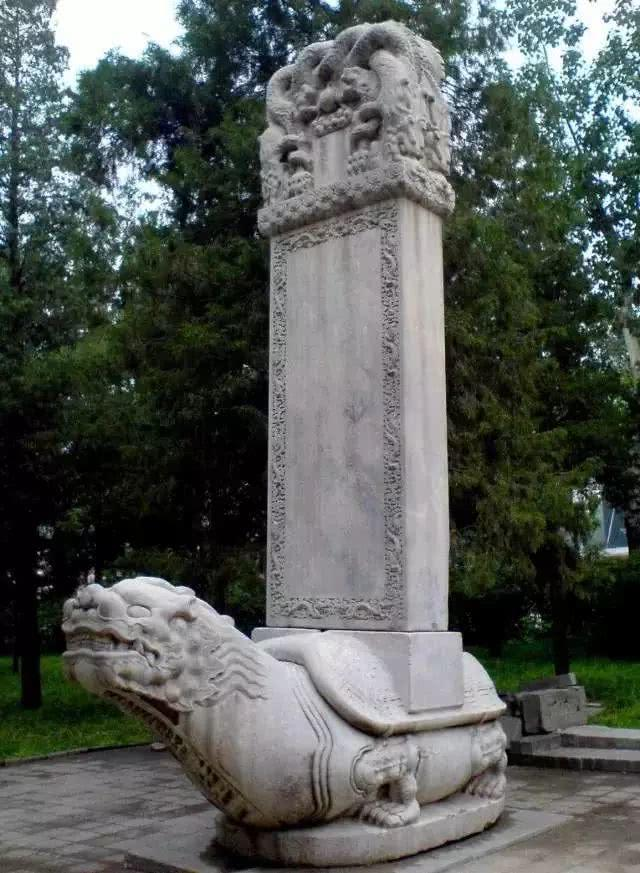