Even though the seventh grade Earthshatter Beast had been dead for many years, its corpse still contained a copious amount of flesh power.

With his Life Drain bloodline talent, Nie Tian drained every last bit of its pure and rich flesh power within a fairly short time.

As soon as the ten wisps of crimson aura, which had expanded significantly, returned to Nie Tian, the green aura in his heart instantly showed its greedy nature and started devouring them madly.

After it had devoured seven of the ten wisps of flesh power, the green aura’s endless desire finally seemed satisfied.

He knew perfectly well that, after the dormant period, the green aura would awaken a brand new bloodline talent for him.

The remaining three wisps of crimson aura circled around Nie Tian’s body, gradually splitting into fine strands of rich flesh power and swimming to every corner of his body.

Fine like hair, tens of thousands of strands of flesh power slowly swam to and refined every bone and organ in Nie Tian’s body.

Feeling sore all over, Nie Tian sensed wisps of blood mist rise from his skin and slowly wreath him.

It wasn’t long before the blood mist morphed into a blood-colored film and covered his entire body.

Under the blood-colored film, crisp sounds echoed out from his bones as strands of flesh power filled his internal organs and his meridians grew more resilient.

Shortly afterwards, impurities flowed out of his pores.

Just like that, the three wisps of flesh power split into countless fine strands, and gradually refined every inch of his body.

The way she saw it, when the cocoon finally broke, it would mean that Nie Tian had finished his refinement of his fleshy body.

Upon seeing that Nie Tian was currently in the middle of a crucial process, she gave up on the idea of searching in other areas, but rather guarded him wholeheartedly.

After some time, the blood-colored cocoon finally cracked open and started to fall off.

As pieces of the cocoon fell off Nie Tian’s body, they took his garments with them. Eventually, Nie Tian emerged completely naked, sitting in the lotus position with his eyes closed.

Dong Li’s bright eyes lit up as she saw Nie Tian’s extremely muscular and masculine body beside her. Then, a faint smile quietly appeared at the corner of her mouth.

That was when Nie Tian’s eyes snapped open.

Dong Li’s expression flickered as she blurted, “Y-you’re on the verge of making a breakthrough, right?!”

Nie Tian nodded as he rose to his feet, completely not held back by the fact that Dong Li was sitting so close. He took out a cyan robe from within his ring of holding and casually wrapped it around himself before saying, “I’ve just finished refining my body. By doing that, I’ve finally broken the barrier that’s stopping me from making my next breakthrough. Since there isn’t anyone else around, I think I’ll make the breakthrough right away.”

With these words, he sat back down on the ground and took out a number of spirit jades from within his ring of holding.

He piled them between his crossed legs, and with a deep breath, he closed his eyes. Then, he picked up a spirit jade from the ground and started absorbing the rich spiritual power within it.

As he did, huge waves instantly rose up and filled his spiritual sea, which was scene he had seen many times. In the next moment, as his spiritual sea went through an upheaval, a brand new vortex of spiritual power gradually came to shape within it.

At the same time, Dong Li snapped out of the image of Nie Tian’s naked body and grew serious as soon as she heard that Nie Tian was going to make his breakthrough right away.

Even though, for Qi warriors under the Worldly realm, their breakthrough process normally wouldn’t be necessarily dangerous, Nie Tian’s situation was special. Because he cultivated three different types of spiritual power simultaneously, she was worried that those powers would conflict with one another, thus adding variables to his breakthrough process.

Dong Li quietly rose to her feet and walked around while constantly checking on Nie Tian with concerned gazes, as if she were afraid that mishaps would happen to him during such a crucial process.

On this day, Nie Tian’s breakthrough had already lasted three days, but there still weren’t any signs of it coming to an end.

During this time, Dong Li had stayed by his side and guarded him wholeheartedly, fearing that unfriendly forces would come at such a critical moment.

However, the things people feared the most usually tended to happen. Just as Dong Li spent day and night worrying about Nie Tian’s breakthrough, clamors of people rang out from the distance.

At this moment, Nie Tian was sitting in the lotus position right beside the dead Earthshatter Beast, making him too clear a target.

She knew very well that people shouldn’t be interrupted while they were in the middle of their breakthrough. Otherwise, the repercussions could be catastrophic.

However, the clamors grew louder with every passing second, which indicated that people were coming towards them.

After a moment of hesitation, she unleashed her psychic awareness in an attempt to learn who was approaching.

Three Greater Heaven stage Qi warriors dressed in Heaven Palace Sect garments were talking loudly as they walked through a dense forest in a casual and relaxed manner.

One of them was Su Lin.

This time, she was given the task of gathering precious materials for powerful experts in the Heaven Palace Sect.

She and the other two with her had also followed the flow of the swirling band to the bottom of the huge vortex, and from there, they had gone through the colorful mist and stepped on this mysterious continent. In fact, they had arrived before the juniors from the Realm of a Hundred Battles.

At this moment, they had already gathered a large number of precious spiritual materials, which was why they were so happy.

Many of their discoveries were rare spiritual materials that couldn’t be found in the Domain of the Falling Stars. By bring them back to the Heaven Palace Sect in the Realm of Mystic Heaven, her status in the sect would be further strengthened.

One of the young men who were walking side by side with her suddenly stopped smiling and exclaimed, “Someone is also scanning this area with their psychic awareness!”

The man’s name was Huang Hu, Huang Fan’s descendant. As Su Lin’s senior martial brother, he was also one of the Heaven Palace Sect’s most valued junior disciples. He was currently at the middle Greater Heaven stage.

Huang Hu instantly tensed up and dashed in the direction where Dong Li and Nie Tian were. Without any hesitation, Su Lin and the other man followed along.

“The body of a seventh grade spirit beast won’t rot even after ten thousand years. I bet there are still valuable parts we can pillage! Just its eyes alone are of great value since they can be used to forge earth-attribute Spirit Channeling grade treasures, I bet people from our sect will surely pay good money for them!”

Since they came from the other side of the Earthshatter Beast, they didn’t see Nie Tian and Dong Li at the first moment.

However, since they had tracked that wisp of psychic awareness to this place, they knew that Qi warriors from the other realms with similar cultivation bases as theirs must be somewhere near that dead Earthshatter Beast.

Meanwhile, the three of them had roamed about in the area for some time now. Judging from the groups of Qi warriors they had previously encountered, they had realized that the spiraling band seemed to have brought cultivators with similar cultivation bases to the same vast area of the continent.

Since the Heaven Palace Sect was known as the most powerful sect in the Domain of the Falling Stars, all of the other Qi warriors they had come across had done everything they could to avoid conflicts with them.

Even when they had happened to discover precious treasures simultaneously, the Qi warriors from the other sects had chosen to walk away.

All of this was because of the Heaven Palace Sect’s deeply rooted power.

It was also because of this that all of the Heaven Palace Sect disciples had become arrogant and domineering, and developed the habit of snatching spoils from others’ hands.

The three of them rapidly spread out and converged on the Earthshatter Beast. Soon, they discovered Dong Li and Nie Tian.

“The Dong Clan?” Huang Hu said with a fake, disdainful smile. “I suppose the Dong Clan can be considered a powerful clan. However, they still can’t contend with the Heaven Palace Sect, can they? Dong Li, right? Give us the Earthshatter Beast’s eye, and we’ll let you go.” 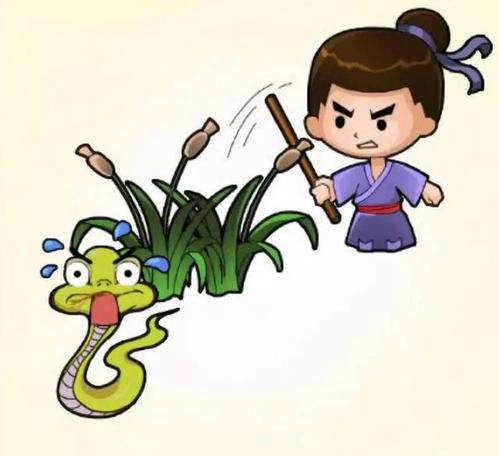 Literal Meaning:  to beat the grass and startle the snake

Tale: this idiom tells a story about a county magistrate in ancient China who was greedy and practiced bribery and graft to further his own wealth and power. One day, a man who lived in the county governed by the magistrate became aware of the ongoing crimes (though he remained unaware of the actual perpetrator), and sent a petition to alert the magistrate. Realizing that he was in danger of discovery, the magistrate remarked “he has beaten the grass and startled the snake.” Afterwards, the magistrate sent his men to seek out the citizen in question and make sure he would cause no further trouble.

This idiom is usually used to describe a person who act rashly and alert the enemy.