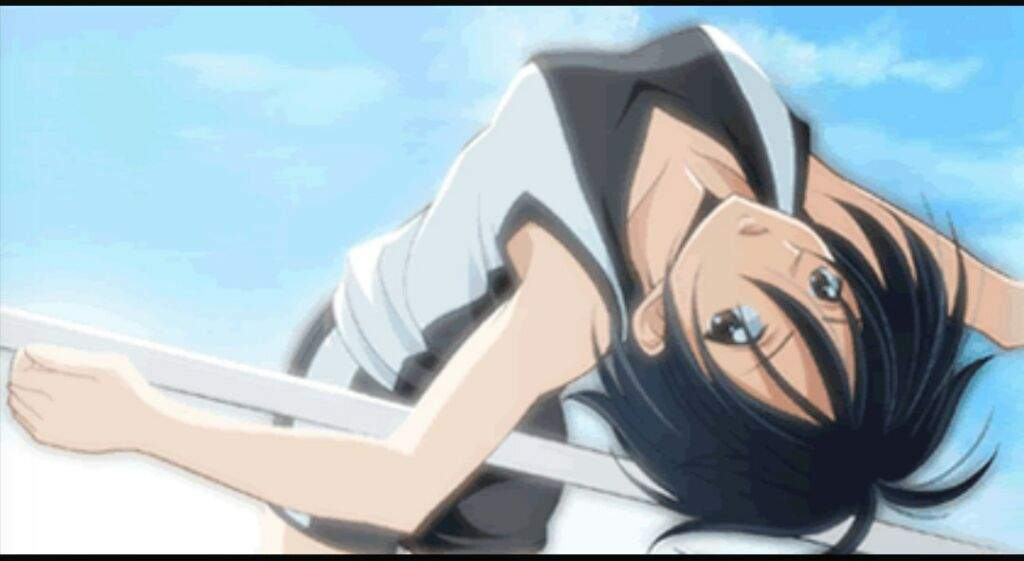 One hour passed by.

A sound similar to something burning filled the room.

The necromancer Mary started to moan.

Cale bit down on his lips.

Raon was talking about both Mary and Hannah.

The black veins on Hannah’s body that looked like they would burst were slowly shrinking. All of the visible areas, including her arms, face, neck, and calves, were all starting to calm down.

In return, lines that look like black spider webs started to appear on her body like tattoos.

It was disgusting. It was ugly.

The lines spread across her body like a riverbed that had been through a long time of drought.

The Saint was looking at her with his eyes wide open.

It was at that moment.

Mary tried to speak, but she could not speak properly because her entire body was shaking. She seemed to be running out of energy.

Mary’s hands that were on Hannah’s back were creating a path for the dead mana to flow through Hannah’s body while absorbing the black smoke coming out of Hannah’s body as well.

She had been creating a path for dead mana to flow through someone else’s body for one hour. That was difficult to do. It was something that only Mary could do, as she was the only human who knew how dead mana flowed through the human body.

A voice started to speak at that moment.

Cale had walked over next to Hannah’s bed. He looked into Hannah’s unfocused pupils and started to speak.

Hannah still had her golden aura surrounding her body. This showed that she was not completely unconscious.

Tasha looked at Cale observing Hannah and bit down on her lips.

As a Dark Elf with the darkness attribute, she was not able to help Mary with creating the path through Hannah’s body. If she was able to do so, she would have done so to help Mary out many years ago.
Since she could not do anything to help, she had given Mary the book that would let her choose the path of a necromancer. [1]

“Hannah, you are the one to protect yourself.”

It was at that moment.

Tasha subconsciously let go of Hannah. A rumbling noise was coming out of Hannah’s body.
Hannah was now sitting up straight on her own.

She was breathing roughly as she started to speak through her bleeding lips.

Cale started to smile and slowly backed away once more.

Like the last ember of life, a blinding golden light shot out of Hannah’s body. Cale could hear Eruhaben’s comment from the side.

“She’s putting everything on the line.”

Hannah’s everything. Hannah was putting everything, including her life on the line, to survive.
At that moment, Cale could hear Mary’s voice.

That was a mixture of a groan and laughter. Cale couldn’t see anything because she was covered by the black robe, but he could tell that Mary was happy.

Mary was happy seeing that Hannah was putting everything on the line. At the same time, the sizzling noise from Mary’s burning hands became even stronger.

It was a disgusting noise. At the same time, even more black smoke started to come out of both Mary and Hannah.
However, Cale did not stop smiling.

That was what his intuition was telling him.

Cale quietly continued to look toward the bed which was no longer visible due to the combination of the golden light and the black smoke. He put a hand on the Saint’s shoulder while standing next to him.

The Saint was thanking someone, although it wasn’t obvious who it was directed toward. In a way, it even seemed like he was praying. Cale continued to listen to the Saint’s thank yous as he waited for the procedure to end.

After another hour, Cale could see Mary starting to stand up.

Hannah was laying on the bed with a relaxed expression. Cale shook his head at Mary’s comment. Mary, who had gotten up and was heading toward Cale, suddenly flinched. She then heard what Cale had to say.

There was a smile on Mary’s face, although nobody could see it because of the black robe. At the same time, Tasha’s shocked voice filled the room.

Mary could tell that her body was starting to lean to one side. She had no strength left in her body.
However, she noticed that she did not fall over. Someone had hugged her before she could fall.

She could feel someone’s touch over her black robe.

“You worked hard. Get some rest.”

It was Cale’s voice. Mary closed her eyes without any hesitation after Cale said that.

That was the last thought in her mind before Mary fainted.

Cale looked down at the black robe in his arms. He managed to prevent her from falling over, however.

He was not strong enough to lift her up. His legs were also hurting after standing up for two hours straight.

Cale slowly turned his gaze and made eye contact with Tasha. Tasha, who had been rushing toward Mary before Cale caught her, was standing there with a blank expression. Cale looked toward her and started to speak.

Tasha nodded her head. The Wind Elemental would be able to move someone like Mary. Tasha could see Cale starting to smile at her response. He pointed at Mary with his chin and gave the order.

He did not have the strength to move her himself.

Both Hannah and Mary had fainted after the procedure was over, but they had succeeded. Both of them were still alive.

Cale turned his head toward the cautious voice calling for him.

The Saint hesitated after hearing Cale’s response. He looked down at Hannah, who was sleeping peacefully, before asking Cale a question.

“Will that necromancer-nim be okay?”
“Yes, she should be fine. Miss Tasha will look after her.”
“…I’m glad. I’m really glad.”

The Saint had the holy look of a Saint as he clasped his hands together and started to smile.
However, the smile soon turned into a bitter smile.

The Saint looked down at his sister, Hannah.
Only the two of them, as well as Cale, who came to check in on Hannah, were in the room.

The room where they healed Hannah had turned into a mess, so Hannah had been moved to the room next door.

The Saint felt both admiration and concern after looking down at his sister under a bright light.

The black spider web-like scars were visible on Hannah’s face.
Anybody would be able to tell with a glance that she had survived being poisoned by dead mana.

‘We will need to live somewhere isolated even if we get away from the Empire.’

“…There will be a lot of troubles from here on.”
“Do you really think so?”

The Saint nodded his head at Cale’s question. However, he did not sound completely defeated.

“Yes. People are wary of the darkness attribute and dead mana. However, now it is my turn to protect my sister.”

If they needed to hide away from the judging eyes of the world, it was now his turn to protect Hannah and keep her hidden. Both bitterness and joy were on the Saint’s face at the same time.

“We will need to spend our whole lives in hiding because people will easily recognize that Hannah has the darkness attribute after seeing the scars on her face, however, it is enough that she is alive.”
“Why do you need to live in hiding?”
“…Excuse me?”

The Saint thought that he did not hear Cale correctly. He turned his gaze away from Hannah and looked toward Cale.

Cale let that go in through one ear and out the other as he continued to say what he needed to say.

“Dead mana is a severe poison for humans. The fact that she was able to overcome it and survive is a miracle.”

The Saint could see that the way Cale was looking at Hannah the same way as usual. At that moment, this thought crossed his mind.

‘Is it because it is young master Cale that he is able to be around a necromancer?’

A Dark Elf, a necromancer, and even a servant with an artificial arm. Cale did not seem to have any issues being around beings with the darkness affinity.

Cale was still speaking as those thoughts crossed the Saint’s mind.

“People who have been through a lot have rougher hands. I just consider the scar on her face as a symbol of what she has overcome.”

The Saint let out a small gasp.

“I think that someday people will appreciate and celebrate someone who was able to overcome such a burden. Just like how you are thankful toward Mary right now.”

The Saint felt like his heart was beating wildly.

He had not purified Mary like his instincts from the Sun God were telling him to do, and now he was thankful to her.
It was because he knew about her story.
He knew about how Mary was poisoned by dead mana and everything she had to overcome to survive.
He also knew that she was willing to suffer through pain in order to save a stranger even after going through so many hardships in her personal life.

The Sun God had said the following to his believers.

Goodness is like a bright light.
No matter how long a human wanders lost in the darkness, a single ray of light could help them continue to live.

Jack, this half Saint who had been living under the oppression of the church, started to understand the teachings that he had been taught. [2]

“Young master Cale, just because someone has the darkness attribute does not mean that they have no good in their heart. That means that the individual is also a source of light, right?”

Jack wanted Cale to answer that for him.
Cale had no problem responding back.

“Saint-nim, a world that understands that fact will soon appear.”

Cale ignored this as he continued to speak to the Saint.

“I believe that we can make that world a reality if we work hard.”
“You are right. I agree.”

The Saint, Jack, nodded his head. A strong desire filled his heart.

Cale looked past Jack’s shoulder and to the bed behind him.

The swordmaster Hannah was starting to open her eyes. She made eye contact with Cale once her eyes completely opened.

Cale looked at her as he started to speak.

Hannah clearly understood what Cale meant by the people who have survived through it all.

Although it was difficult, Hannah smiled toward Cale. However, that smile was not warm at all.
It was a smile that was a mix of joy for being alive and coldness to get her revenge.

“You are right. Young master Cale, you really are a deep individual.”

Cale modestly smiled toward the excited Saint. He looked toward the now real Saint and the fake Holy Maiden who had not forgotten her goal as he started to think.

‘I’ve prepared something to use in order to surprise the Empire.’

The preparations for a show to shake the Empire were now complete.

1. Pretty sure it was Obante but sure, Tasha.

The teaser was about overcoming hurdles.