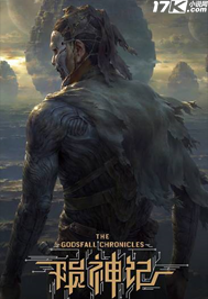 RWX’s English Synopsis: The nuclear holocaust which caused the collapse of the Old Times on Earth should have wiped out all human life on the planet.  Yes, the gods set up their beautiful Elysiums to provide sanctuaries for their chosen, but by all rights everyone outside the elysian lands should’ve perished long ago.  Yet somehow, human life still managed to persist, even in the deadly, mutant-infested wastelands.  Cloudhawk was a young scavenger who dreamed of being as free as the hawks in the skies, yet seemed destined to live out his life scrounging for scraps in the wasteland ruins.  Fate, however, is ever-fickle.  A chance meeting with a ragtag group of mercenaries changed the trajectory of his life, bringing him into a world with mutants and metahumans, demonhunters and godslayers, and even gods and demons.  Cloudhawk would find his own place in a world that was far greater than he had imagined, find his own path between the zealous light of Sumeru and the whispering darkness of the Abyss… and one day, he would find that even gods may fall.

Official Chinese Synopsis: This is a world of nirvanic rebirth, a world of marvels and illusions, a world where faith is enduring and yet ruined. This is the story of a youth who seems ordinary, but who shoulders an earth-shaking secret and burden. He shall rise to prominence from his humble roots and walk a tightrope between life and death, and be lost in deciding between what is right and what is wrong. He seeks out the truth behind the destruction of Earth’s civilizations, and shall experience unbelievable dangers as he grows. In the end, he shall discover the hidden secrets behind the ancient war between the gods and the demons, and shall play the lead role in this stunning and exciting story!