Chapter 1569: How to Resolve Things

Commander Yong would really find it hard to forgive himself if this was the reason for his wife’s sickness.

Jiang Chen didn’t purposefully dwell on anything and continued. “The theory behind this all is as everlasting as the sky and earth. Your metallic qi keeps attacking the wood qi in your wife’s body. Wood qi rules over one’s vitality and symbolizes to thrive and flourish.

“If wood qi is strongly abundant, then so are one’s bodily operations. If the qi is weak, then that in turn is reflected in one’s body. The five elements within a human body form a natural cycle. However, your wife isn’t a cultivator and can’t create a microcosm of the world in her body like we can. Therefore, she doesn’t have the ability to filter and expel your murderous aura. Chronic decline of vitality is the root of the madam’s illness.”

They’d gone back to the most basic of theories. Most pill masters wouldn’t be able to observe things in such detail, making it impossible to put everything together and lay out the why’s and how’s. This was why so many had failed with their diagnosis.

They’d shared a common fallacy, that Ah Tang’s bodily operations were weakening because she had run afoul of some evil spirit or had been poisoned. Thanks to Jiang Chen’s unique circumstances, his vastly superior knowledge and deductive abilities had enabled him to come to the right answer.

“Sir Jiang, is there a cure for this?” This was still the commander’s most pressing question.

Jiang Chen nodded. “Though her vitality is diminished, it still exists. There's hope as long as that holds true.”

But Jiang Chen shook his head. “That’s not appropriate here. Your wife isn’t a cultivator, which is precisely why she’s being impacted by you. Meanwhile, your children have foundations in cultivation going back to their youth, which is why they’re not affected. Your wife also has an innate lack of wood qi, making for weak circulation of the elemental cycle. Brashly giving her wood attribute medicines now would be a bid for speed that won’t bring about success.”

“Why?” The commander was baffled. Since his wife’s internal wood qi was being devoured, shouldn’t they quickly replenish it?

“To put it simply, feeding her medicine now would be harming her, not helping her. Your wife is weak and not equipped for a sudden influx of wood spirit energy. It’d be forcing a slowly babbling creek to accept the waters of a teeming river. That’s highly inappropriate.”

Enlightenment dawned for the commander and he nodded in rough understanding. He offered an apologetic smile. “I’m sorry, Sir Jiang. I’m just in a rush. You’re so confident that you must have a plan, right?”

Jiang Chen did indeed have an idea, and a very good one at that.

After a beat, he took out a small bottle that contained the essence of the wood spirit spring. This was something he always kept on him, in case of sudden emergencies. There was also nothing else beneath the heavens more suited to heal the commander’s wife.

“Commander Yong, I have a few drops of wood spirit energy here. Go purchase a lot of pure wood attribute medicines and distill them into liquid. Mix them with what’s in the bottle and have your madam bathe in it three times a day. This will refresh her pores, skin, flesh and blood, organs, and meridians, fully curing her.”

One went all the way when saving a life. Though the essence of the wood spirit spring was precious, Jiang Chen didn’t lack for any. It was an act of good karma to save a life, plus, it was an easy favor. Thus, gifting the essence didn’t feel painful at all. The married couple obviously loved each other, and there was no reason for Jiang Chen to stand by coldly and not help.

“That… that simple?” The commander was rather taken aback.

“That simple.” Jiang Chen smiled faintly. “You can try right now if you don’t believe me. The effects of the first bath will be quite good and instantaneous. The resulting baths just aid the recovery and won’t be as dramatic as the first one.”

There was no one in the world who could doubt his medical skills.

Though the commander still found it incredible, he had no other options left to him. Besides, he’d been the one who invited the young man over, so he had to believe in himself!

Commander Yong quickly prepared a batch of wood attribute medicines and adroitly a large tub of liquid out of them.

“How many drops, Sir Jiang?” Jiang Chen’s words were now the gospel truth to the commander.

“Five drops is necessary.” There was very little of the essence, so five drops was already highly precious. However, the concentration had to be higher the first time around.

It was a bath, in any case. Not taking the essence orally immensely diluted its domineering impact. This was the only way an ordinary human could take it. Swallowing the essence whole was suicide for a non-cultivator. Their bodies would spontaneously explode.

Jiang Chen smiled faintly after the preparations were made. “Commander Yong, I’ll wait outside. You shouldn’t remain present either. You still can’t control your murderous aura, so you represent an enormous source of stress to your wife.”

The commander nodded rapidly and helped his wife in. “Ah Tang, I’ll show myself out after helping you in. I’m sorry, it’s all my fault.”

When Jiang Chen walked into the yard, the commander’s son and daughter came running over. “Uncle Jiang, can you save my mommy?”

“Please Uncle Jiang, please try your best to save her.”

Jiang Chen was reminded of his own daughter when he looked at these adorable children, and the lonely figure she’d cut at Plumscore Retreat.

“Don’t worry, your mother will be fine. She’ll be hale and hearty after today and nothing else will happen to her.”

“Uncle Jiang, Li’er just knew that you’re different from the others. You really are different! Li’er will have a mommy again after you save her!” The little girl was highly excited and scurried up to Jiang Chen, grabbing him for a kiss.

Jiang Chen laughed heartily. “Alright now, go off and play. Your mother can come out for some fresh air after an hour.”

Commander Yong walked out at this time as well, wringing his hands. It was apparent that he was still very nervous. He was extremely worried about his gains and losses. What would he do if Jiang Chen’s plan failed? He was out of ideas and resources. If it didn’t work this time, he really was out of inspiration.

“No need to be that way, Commander Yong. You had no idea what you were doing. After this bath, you will have much less of an effect on your wife. She’ll form a natural cycle within her that will defend against the erosion of your aura. You’ll also need to keep at your cultivation, so that you can reach the state of deploying and retracting your aura at will, as soon as possible.”

Jiang Chen waved a hand and didn’t say anything else. He knew that all words were useless on the commander at this point in time. They had to let the truth speak for itself.

After a period of nervously wringing his hands, the commander finally came up with conversation topic. “Sir Jiang, you mentioned that you’d signed up for the selection?”

The commander responded with a wry smile. “With your skill and talent in pill dao, there’s no need for you to go through the selection at all. The city lord definitely has need for a genius like you.”

But the commander waved a dismissive hand. “That’s easily taken care of. Which faction accepted your fee? I’ll get it back for you. How dare they take a fee from someone who will definitely qualify?”

Commander Yong grew much more dominating when speaking of topics other than his wife. Though he was just a commander, he was still a direct subordinate of the city lord’s faction.

As strong as the seven factions may be, they had to respect one from the city lord.

Jiang Chen asked after a moment of thought, “What kind of topics will be covered in the selection?”

“The selection have always focused on pill and martial dao. Sir Jiang is uncommon in both. If you come with a hefty recommendation, you’ll definitely be trusted with an important position in the city lord manor.” Commander Yong thought for a moment. “My superior is a great commander and he has the right to speak to the commander-in-chief. If we have the chief put in a word for you, you’ll make it straight into the city lord’s line of sight. You’ll be able to forgo a lot of the red tape from the selection and soar to the skies with a quick move.”

The prospect was tempting. It’d been out of resignation that Jiang Chen was participating in the selection. If it was up to him, he’d rather not waste this time on the selection. After all, he was most short on time at the moment.

But then again, if he gained the city lord’s attention through a connection with Commander Yong, he could also implicate the commander if he ran away one day. This, Jiang Chen wanted to avoid.

He smiled faintly. “Thank you for your good intentions, Commander Yong. I’ll still participate in the selection.”

“I mean it, Sir Jiang! And with your talent and skill, it is indeed a bit of an insult and waste of time to participate.”

Jiang Chen remained smiling without a word. He knew that the commander only had the newcomer’s best interests at heart.

“Your sentiments are enough, Commander Yong. Don’t worry about the recommendation.” He remained firm.

Though the commander didn’t quite understand, he didn’t continue pushing forward after seeing how resolute Jiang Chen was. He sighed. “Alright, come find me if you think through things one day.”

The two changed topics, and Jiang Chen learned a lot more about Sin City thanks to the commander. He in turn described how exciting and radiant the outside world was.

Conversation flowed happily when footsteps sounded from the other side of the door. The door creaked open, stunning the commander with what it revealed.

Preview of my inaugural comic strip... XD More on Patreon! 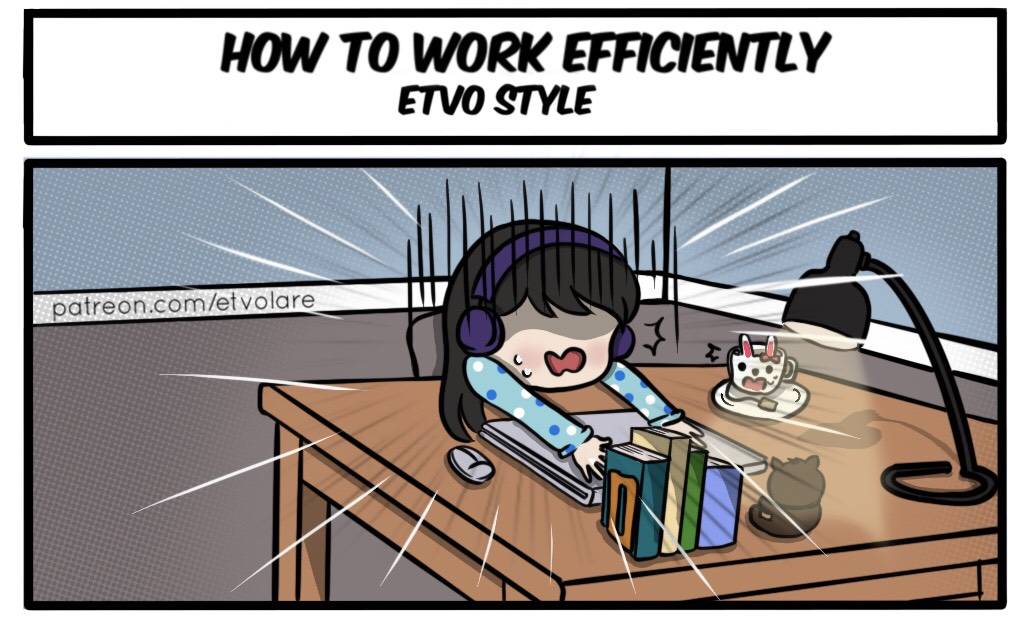