Gu Tianqing was furious. In his arms, all color had drained from Xi Yuan’s face and she trembled like a leaf when she saw his expression.

“Bitch! Didn’t you say that the strongest warrior in the human domain is only great emperor? Who are the golems? And who’s the youth riding the dragon?” Gu Tianqing bellowed harshly with smoldering eyes. Clearly, he believed that he’d been duped by Xi Yuan.

The holy maiden was pale and frightened. “Y-your Highness, t-that’s Jiang Chen, the leader of the human race…” she stuttered.

She’d just betrayed the Moon God Sect, so it was only natural that she’d feel some guilt when she saw Jiang Chen. She was afraid that he’d target her. With her current abilities, there was no way she’d survive an arrow. Moreover, Gu Tianqing’s men would never be so gallant as to protect her.

Xi Yuan was fraught with worry as she didn’t have an affiliation with either side. She could easily end up as Jiang Chen’s target for revenge or Gu Tianqing’s punching bag. A sense of dread flooded her heart. She would’ve made a safe retreat by now if she’d just obediently stuck to the sect.

For some reason, she’d always been afraid when seeing Jiang Chen. It seemed like he was capable of anything and everything.

Gu Tianqing was taken aback when he heard Jiang Chen's name, but quickly regained his composure. Even though he was hot-tempered, a Gunuo prince like him was no idiot.

“Gu Qi, which of you will take his head off for me?”

Gu Tianqing was accompanied by five personal guards, the strongest of which was Gu Qi. The other four were only half-step empyrean, but they were much stronger than the common great emperor.

The five personal guards were extremely conflicted when they saw the meandering true dragon in the sky. Their defense would absolutely weaken if they went after Jiang Chen. What if the attacker was trying to lure them away? If they went after him, he could turn around and put an arrow through the prince's head!

“Your Highness, Jiang Chen has come prepared. It's better that we don't make any careless moves until we understand what he's up to. His abilities have yet to reach the stage of perfection, but the bow in his hands is nothing to scoff at.” Gu Qi was rather confused. He'd never been in such a peculiar situation until he met Jiang Chen.

The youth wasn't yet a great emperor, but he somehow had the strength to threaten an empyrean expert's life. This was highly baffling. As a personal guard, his primary task was to ensure the prince's safety. Fame and glory were only a second thought.

Gu Tianqing also understood that his command put the guards in a difficult spot. He was aggrieved. As someone who’d just transcended to the great emperor, he was the most respected figure among the youths in the village.  Yet despite his stature and cultivation level, his life was being threatened by someone even younger than him! It was a great blow and challenge to his pride.

Even though it was the opponent’s bow that threatened his life, he couldn’t help but feel exasperated.

Jiang Chen didn’t plan to fight to the death with the Embittered Savages. When the Moon God Sect retreated to a safe distance, he sounded the signal. The four golems instantly recognized the sign for retreat.

The brothers were already at the end of their ropes; this was the northwestern wastes after all. The ambient energy here was practically nonexistent. Fighting in this environment was actually torture. Feeling the anguish, they immediately ended their rampage and retreated to the outskirts.

They weren’t the only ones feeling the pain. The barbarians were also greatly affected by the lack of spirit qi, but it didn't take as big of a toll on their bodies as many of them had yet to reach empyrean realm.

Gu Tianqing instantly recognized what was going on. “Gu Qi, they seem to be retreating?”

Gu Qi nodded. “This is a wasteland with very low qi density. Even normal humans would find it difficult to live here, let alone cultivators with high energy demand. Those large beings probably don’t want to exhaust themselves!”

Despite his findings, Gu Qi was still reluctant to make a move.

Gu Tianqing was aching to leap into action, but Gu Qi didn't fan the flames and dumped a bucket of cold water over his liege’s head. “Your Highness, Jiang Chen absolutely has a number of trump cards hidden up his sleeves since he’s the leader of the human race. Perhaps now is not the best time to have a life or death battle.”

The prince was annoyed, but there was nothing he could do about it.

“Listen to me, Embittered Savages! If you don’t wish to die in a foreign land, now is the time for you to scamper back to your territory! Death awaits all invaders!” High up in the air, Jiang Chen emitted a dragon roar so powerful that it shook the sun and moon.

The mountains and rivers trembled as the sun and moon quivered. It rather sounded like the combined bellows of numerous dragons.

All of the barbarians, Gu Tianqing included, suddenly felt inferior and small. The sight of Jiang Chen riding a true dragon was simply too stunning.

Dragons were highly venerated beings in Embittered Savage culture. Prayers were offered to dragon totems as dragons were an integral pillar that’d kept the race going forward all these years. Thus, they were equally frightened as they were perplexed.

Did the humans possess dragon taming arts? How could a legendary beast, their target of worship, be reduced to a mere mount?

The invaders secretly heaved a sigh of relief after Jiang Chen disappeared from sight. The divine bow was a guillotine hovering over their heads. This terrifying threat was finally gone for now.

Gu Tianqing smashed an ill-tempered blow at the ground. Jiang Chen had played the prince’s entire army like a fiddle with a party of only five. He’d even had to watch his prey flee before his very eyes! Never before in his life had he been so humiliated.

“Gu Qi, that bastard truly deserves to die a thousand times over! How dare he make a fool out of me?! I will never let this go! How dare a peasant like him threaten our warriors? He’s just an opportunist that hides behind his legendary bow! How is he even worthy to be the leader of the human race?!”

Thanks to the human, Gu Tianqing had lost a lot of face. He needed to vent his frustrations to regain some balance. The sight of Xi Yuan hiding at a corner made his blood boil even more.

He beckoned the holy maiden over with his finger and slapped her viciously on the butt. “The information you gave us was wrong! How will I face my men if I don’t punish you?”

He grabbed her, set up an isolating formation to block off all eyes and ears, and did the unspeakable right then and there.

His rough handling scared Xi Yuan, yet also excited her a little.

She’d often fantasized about sexual relations while in the sect, but had been restrained by strict rules. Her fantasies could only ever remain as fantasies. Thus, she actually somewhat anticipated being violated by the foreign prince.

Spurred by an innate desire to live, the Moon God Sect party ran away from the northwestern wastes in one breath, the incident still fresh in their minds.

The head sectmaster made a sweeping gesture. “Alright, we’re safe now. No need to panic, we’ll wait here for young lord Jiang Chen and his companions.”

Even though she’d crossed paths with death and was covered in her own blood, she remained as calm and collected as ever.

“Honored Master, let Shan’er tend to your wounds.” Xu Shan came over to treat the wounds.

“It’s only a flesh wound. No matter.” The head sectmaster didn’t seem concerned about her injuries. Instead, her concerned gaze was constantly set towards the northwest.

“Head Sectmaster, the army will not reach us in such a short amount of time. There’s no need to worry,” an elder comforted.

The head sectmaster sighed. “I’m not worried about the Embittered Savage Tribe. I’m worried about young lord Jiang Chen. My heart won’t be at peace if anything happens to our savior...

“The human domain can do without the Moon God Sect, but it can’t afford to lose Jiang Chen,” she added after a short pause. These were genuine words from the bottom of her heart, not mere pleasantries.

If it wasn’t for Jiang Chen, the human domain would still be a pile of loose sand. The current state of affairs was the result of his blood and sweat.

The second sectmaster nodded thoughtfully without saying anything negative. Her prejudice against Jiang Chen had finally vanished after this incident. Those who repaid evil with kindness were few and far between. Jiang Chen had already shown the Moon God Sect far more benevolence than he had to.

“He's back!” Joy filled the head sectmaster's beautiful eyes. Moments later, a clear dragon roar was heard from the skies.

Jiang Chen was still riding Long Xiaoxuan while the four golem brothers were running on foot.

The Embittered Savages weren’t after them. It was obvious that the barbarians had been backed against a wall. Now wasn't a good time for risky chases.

Unfortunately, Jiang Chen was unlikely to ever be interested in any of their disciples. The sectmaster approved of Jiang Chen greatly. If he took a liking to any of the holy maidens, she'd be more than happy to betroth her to him.

Unfortunately, that was very unlikely to happen. He already had a wife and a dao partner from Myriad Abyss Island. Why would a person of his stature be interested in anyone from her sect? 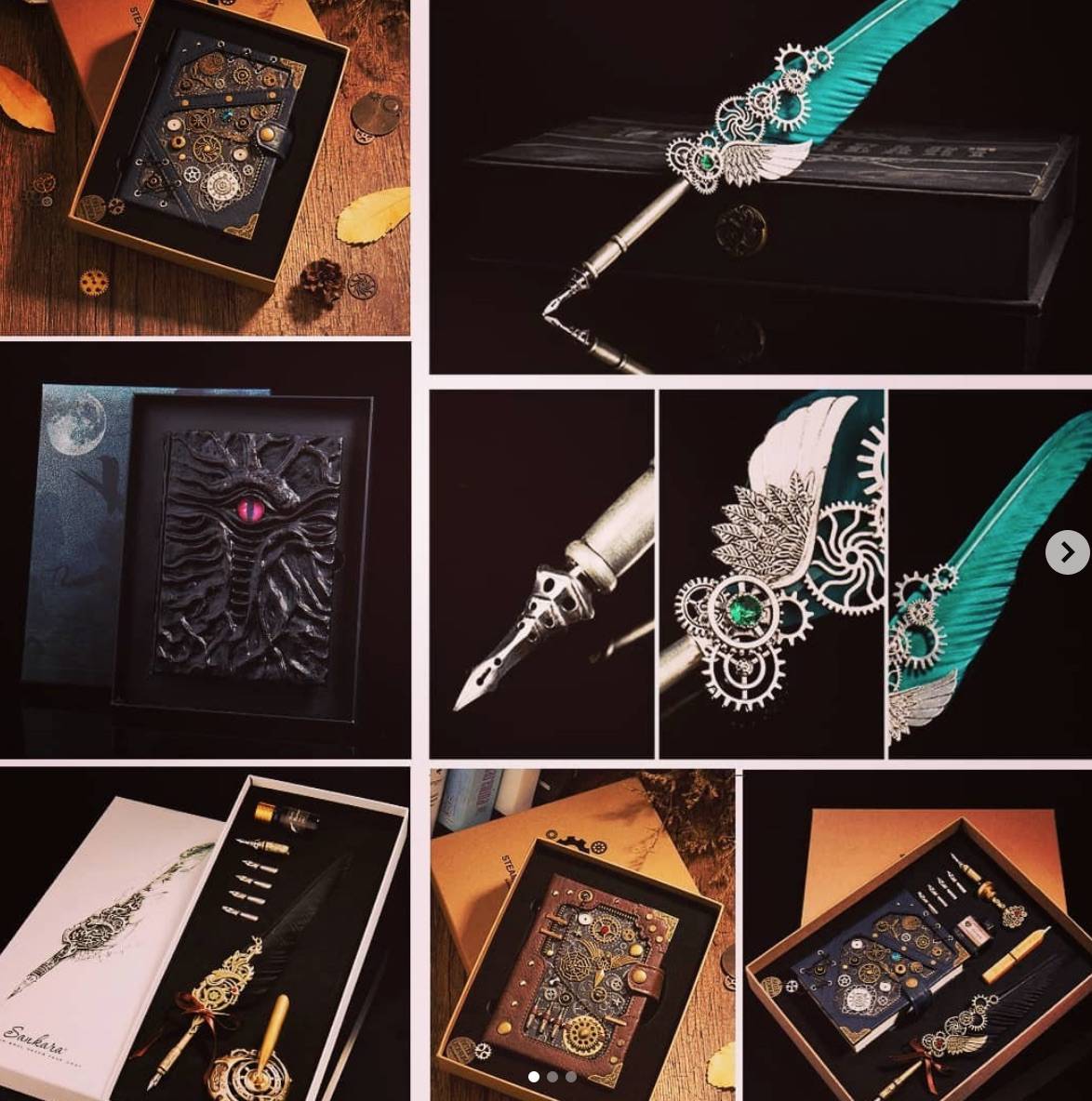 Something a lot less gross is Legion of MEN's giveaway!

He's celebrating 500 chapters and has some of the coolest swag I've seen in a while. That pic is only one of many! Check out his Insta for more details!