Elder Li kept urging Jiang Chen to stay, but the latter stomped out of the Resplendent Emerald Veranda in a thundering rage. He didn’t give Elder Li the opportunity to stop him. Jiang Chen hadn’t really planned on selling anything to the Veranda anyways. His ultimate goal was to see Wei Xing’er. Since he’d achieved his goal, he no longer had a reason to stay.

He had given Wei Xing’er the powder, but there was a possibility that the stubborn girl might not consume it for fear of putting Jiang Chen in harm’s way. Because of that, Jiang Chen had resorted to a few other tricks to track Wei Xing’er.

The Veranda master was a respected figure in the Great Scarlet Mid Regions, but not even Emperor Peerless could see through Jiang Chen’s methods, let alone a sixth level emperor. The Veranda master likely didn’t expect that anyone would leave an imprint on Wei Xing’er’s body. Thus, he’d never considered this possibility and taken any precautions.

Jiang Chen had made sure that he’d have a backup plan in case anything went wrong with the first. This made him a lot calmer than before. He headed to a nearby inn and booked a room. His tracking techniques were effective even if he was a few hundred miles away from Wei Xing’er. He didn’t keep a close distance with the Veranda in order to avoid alerting them.

Jiang Chen initially thought that he’d have to wait for a few more days, but he sensed something odd happen that very night. When this spiked in his awareness, he activated his abilities and noticed that Wei Xing’er had already left the Great Scarlet capital.

Wei Xing’er was taken away by the Veranda master under the cover of the night sky. She acted like a puppet and didn’t put up even the slightest resistance, but she seemed resolved.

It was evident that she’d resigned herself to fate after Jiang Chen had given her the warning. And just as he’d thought, she didn’t consume the powder. Instead, she tossed it into a trash heap.

“Jiang Chen… your attempt to save my life makes me feel that everything I’ve done wasn’t for nothing. Everyone calls me a femme fatale, but nobody realizes that the men I’ve killed were all worthy of a thousand deaths. It’s true, I’m a selfish and vile person. But… I don’t want to drag you down into the pits of hell with me. I want you to owe me a favor that you’ll never get to repay. That way… you’ll never forget about me even when you’re with another woman…”

Wei Xing’er became as calm as still water after such thoughts passed through her mind. The fear and terror that she’d previously felt was gradually taken over by a peaceful acceptance of her inevitable death. If the hands of fate really did rule one’s life, then she’d given herself over to them.

She was very touched that Jiang Chen had personally come to save her, but she was convinced that the young man wouldn’t succeed. Instead of letting Jiang Chen walk down a path of certain destruction, she’d much prefer to have a quick and silent death. This was her resolve. There was no way she could’ve known that Jiang Chen had already noticed the anomaly within two hours of her departure from the capital city and was giving chase via the imprint on her body.

Night was no different from day for Jiang Chen. He’d cultivated the God’s Eye almost to its peak. His vision wasn’t affected at all by night or day, and te darkness of the night was no match for the God’s Eye.

He didn’t follow too closely because the cunning Veranda master had set up multiple sentries along his path beforehand. If Jiang Chen hadn’t anticipated it and rushed in bull-headedly, he likely would’ve been detected. However, he was taken aback by the fact that only four of the twelve protectors were with the Veranda master. The other eight were nowhere to be found. He was slightly bewildered, but quickly noticed the crux of the problem.

Misdirection. The oldest strategy in the book. Jiang Chen was impressed by the Veranda master’s wits.

This move would indeed lure away a big portion of his enemies. His way would be much safer after that. Moreover, he’d also planted numerous eyes and ears around his original path. If someone was tailing him, these hidden senties would issue an early warning so that he could be prepared for the fight ahead. With such powerful escorts, not many could even attempt to do the Veranda master harm unless they were high level emperors.

Jiang Chen’s speed was comparable to Emperor Peerless. Keeping up with the Veranda master wasn’t difficult at all, and the hidden sentries were the only thing giving him trouble. He went through great lengths to evade each and every one of them.

In order to protect himself from hidden dangers, Jiang Chen also planted a bunch of sentries along the path. However, his personnel was made up from a group of Goldbiter Rats. The Goldbiter Rats was much stronger in general after the awakening of their bloodline, and the Rat King in particular was already inching towards emperor realm.

The handpicked geniuses of the clan had seen much improvements as well. The Goldbiter Rat clan’s strength lay not on their individual prowess, but in their unity and numbers. Of course, their biggest advantage was still their incredibly destructive jaws and devouring ability.

A single Goldbiter Rat wasn’t that scary, but once their numbers crept up into the hundreds, they became a force to be reckoned with. Even an elephant could be bitten to death by a large colony of ants. The Goldbiter Rats were the embodiment of that proverb. Their clan had once taken the heavenly planes by storm with their incredible numbers and powerful jaws. But that was Goldbiter Rats of old, the Goldbiter Kingrats.

Additionally, their powerful jaws wasn’t their only strength. They also had the innate ability to tunnel into the ground and collect intelligence. Eavesdropping was what they did best because of their underground nature. They always lived in the shadows, far away from the light. If they ever appeared, it meant that a rat tsunami was about to befall the surface. They wouldn’t appear otherwise. It was simply against their nature.

After placing vast numbers of Goldbiter Rats along the way, Jiang Chen had also created a surveillance network.

As the sky gradually brightened, he could sense that the Veranda master’s group was slowing down their pace. He soon found out that the group he was tailing was now located in an enormous mountain range, tens of thousands of miles away from the Great Scarlet capital.

The mountain range spanned as far as the eye could see and was extremely majestic. At first glance, it almost seemed like an ocean comprised of numerous green mountains. The sense of scale gave its viewers an inexplicable sense of awe.

Jiang Chen entered the range and immediately sensed that the Veranda master was looking for a suitable place to breakthrough. He slowed down his pace after entering the depths of the mountains. He could easily track down Wei Xing’er due to the imprint on her body. There was no need for him to worry that he might lose track of her.

“Young master Chen, there’s a cave one hundred and fifty miles from here. However, it’s enclosed by a formation and four emperor realm experts. Every single direction is being watched by an emperor cultivator. I dare not go near for fear of alerting them of our presence.”  The Goldbiter Rat King had personally collected this information for Jiang Chen.

“There’s a formation as well?” Jiang Chen was mildly taken aback. The Veranda master had done a lot of preparation for his breakthrough. A formation wouldn’t appear out of nowhere in a place like this; it must’ve been set up beforehand.

“Indeed. Every single formation is guarded by an emperor. The formation will activate if someone tries to force their way through, alerting all four emperors. If you get too close, you might trigger a combined attack from all four emperors.” The Goldbiter Rat King had investigated very thoroughly. “We can’t avoid triggering the formation even if we try to tunnel through it underground. It’s very peculiar. It’s almost as if it was made specifically for this terrain. Oddly enough as well, the earth also seems to be pulsating.”

“The earth is pulsating?” Jiang Chen was taken aback.

Pulsating earth was one of the unique properties of the earth attribute. If integrated into the formation, trespassing would trigger an enormous tremor that spanned the surface to the very depths of the earth. The tremors would summon a strong pulsating attack that would lay siege to the trespassers and churn everything underground into pieces. Once the earth began to pulsate, one had to escape immediately or there was very little chance of survival.

Of course, there were always exceptions, but Jiang Chen found it very strange. This wasn’t an everyday occurrence. Making the earth pulsate through the operation of formations was extremely difficult and required a large sum of earth attribute spirit stones. In fact, ancient sects that could create such a powerful formation was few and far between. They were as rare as a hen’s teeth.

There was only two possible ways to explain the formation’s existence. Either an empyrean formation master was present, or there was an earth attribute treasure underground creating this movement. 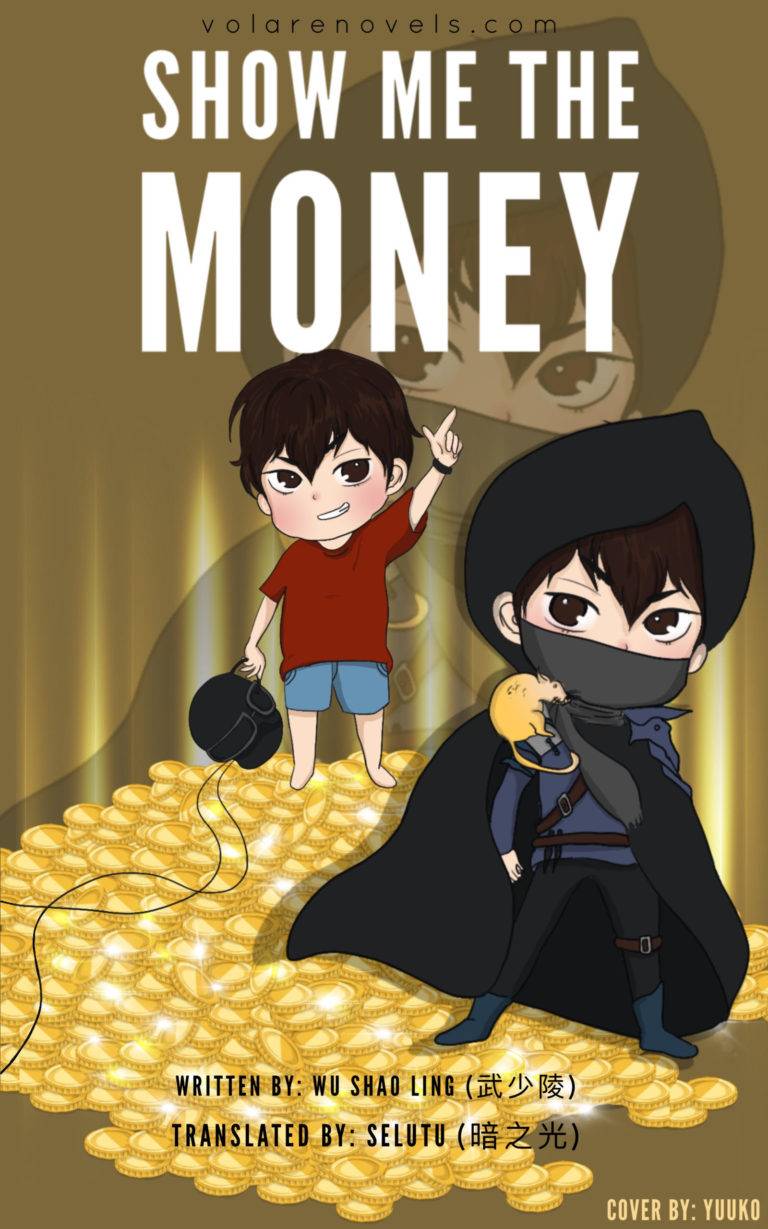 This is a start of a good ride, folks! Rubs hands.

Also, shout out to Show Me the Money, a completely shameless VRMMORPG launching today with 50 chapters and two chapters a day~

"G*ddamnit! Now I’ve got to look for another job to pay the bills! That f*cker! I did nothing wrong!

Huh? What’s that? Eternal, a full dive VRMMMORPG that gives you the chance to make real money? Perfect, that’s exactly what I need!

What class should I pick?

Warrior? No, I don’t want to tank.

Archer? Mage? No, I’ll be too far from the loot!

Rogue? Seems nice. We can steal stuff too? Perfect!