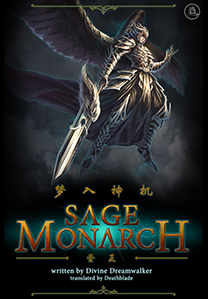 Sage Monarch is one of the most popular novels written by star author Divine Dreamwalker. It is a "xuanhuan" novel, meaning that it mixes elements of both Western and Eastern fantasy. It has a complex plot that stretches from the beginning of the novel all the way to the end, as well as an enormous cast of unique characters, abilities, items, etc.

What are people saying about Sage Monarch?

“One of the greatest light novels” - Akio

“Deathblade has done it again. Absolutely incredible. It’s chapters… make me want to learn Chinese for myself.” - Amodace

“I love this story for many reasons... In it more than any other I've read before I feel like I can understand the [motivations] of the villains. In their own world they make sense… and are not bad just for the sake of being bad.” - Shuran

“By far the quickest zero to hero progression I’ve ever seen... I’m loving it!” - Peever

"I love the world-building in Sage Monarch. The universe is relatable." - Iodashu

"This novel is really awesome. It's like a never ending train of badasses.... There really aren't many of the normal xianxia cliches and even those that are there are tolerable or done in a different way. All in all its a breath of fresh air among all the low quality content that populates this genre." - Nazara

Yang Qi is a skilled fighter, but also has the reputation of being hedonistic and impulsive. To impress a girl, he does something monumentally stupid, and ends up crippled, unable to practice martial arts or energy cultivation. Furthermore, his actions put his clan in danger of being exterminated. To top it all off, he gets struck by lightning. However, as it turns out, being struck by lightning isn't such a bad thing after all....