Chapter 981: The Cosmos of the World of Immortals

Only human kings of the Three Purities realm possessed the requisite level of strength to enter space and safeguard it for the realm. There were no great emperors in the world of immortals at the moment. Though the little fox was an empyrean master, she was an anomaly as she wasn’t a great emperor beneath the immortal dao.

However, Lu Yun was confident that in the less than seventy years to come, there would be great emperors who appeared on the scene. His Yama Kings, at least, would absolutely break through to that realm. And now that there was a sapling beside the Karmic Tree, that meant Tianqi was about to return.

Lu Yun had never hoped that the world of immortals could defeat their age old enemy in one single battle. Opposing the dead spirits and the chaos creatures behind them would be a long and arduous process. The immortal dao was established six hundred million years ago, may it, the world, and realm still exist after another six hundred.

“You’ve finally found the root cause of everything!” Violetgrave smiled to see Lu Yun and Qing Yu appear hand in hand. “The six dao palaces are the source of the dead spirits in this realm. If you eliminate them, that will decrease the amount of dead spirits in the lower realm by more than half.

“However.” The sword turned grave. “The two of you will die without a doubt if you enter the cosmos with your current level of strength.”

The cosmos was incredibly vast and currently suppressed by the world projected by the World Gates. It had once been the cosmos of the world of celestials, the most prosperous locale in this realm.

Lu Yun still retained Yinglong’s gift of the star map in his mind. Though it recorded the constellations of the great wilderness, that was the same night sky as the world of celestials—which was also the current projected cosmos of the world of immortals. A hundred million years had changed space beyond recognition, but its core essence was the same. The familiar cosmic power and principles could be found in the cosmic layout.

The only difference was that dead spirits had completely occupied the cosmos. Even great emperors wouldn’t dare enter now.

“Who says we’re going out there in person?” Lu Yun smiled faintly and sat down cross-legged on the ground. A young man wearing white linen robes with loose long hair framing slightly rough hewn features walked out over his head.

Lu Yun had employed the nascent spirit observation method to project a double created from hellfire, which gave Lie Shan the same strength and cultivation level as Lu Yun.

Qing Yu smiled faintly and operated the same method, summoning a wheel of Sol Truefire. A young girl with regal features and dressed in an opulent imperial robe walked out over her head.

This was her projected double.

Now that she’d refined the heavenly palace and coalesced Sol Truefire as the fire of the immortal dao, she created an empress of immortal dao when she viewed herself!

The first great emperor of the human race and the first immortal empress of the immortal dao!

“I see, one of Sol Truefire and one of hellfire. The two of you won’t meet with any danger out there if you manifest with those flames.” Violetgrave gently batted her forehead and fell silent.

Lu Yun and Qing Yu smiled at each other, then sent their doubles through the World Gates into the vast space. When they looked back at their world, they saw the planet itself and a faint cocoon of light around it. That was the inner cosmos of the world of immortals, of which the World Gates stood at its highest point to separate the inner and outer cosmos.

Dense tides of yin spirits drifted aimlessly through space, devouring everything they sensed in front of them, including themselves. A massive horde of scarlet bale spirits were gathered outside the gates. It drew back and rammed against the indestructible World Gates again and again.

Radiance as pure as white jade sparked over the gates and illuminated space. It looked incomparably sacred and was inscribed with profound runes of the immortal dao. However, fresh blood dyed these pristine gates.

Lu Yun didn’t know whose blood it was, either.

Inexhaustible numbers of dead spirits sensed Lu Yun and Qing Yu the moment they appeared, surging in their direction like sharks scenting blood.

One golden and one black flame ignited in space, sending the spirits scattering in disarray with ghastly shrieks.

“What a pity that only hellfire and Sol Truefire can scare them off,” Qing Yu lamented. Even connate li fire didn’t have such qualities. If it burned in this part of space, the dead spirits would immediately put it out. Only Lu Yun and Qing Yu could perfectly control the flames that the spirits were afraid of.

“There’s no time to be lost, let’s go find the two dao palaces!” Lu Yun could sense a ponderous presence slowly rising from the depths of space. It would seem that a terrifying giant creature slept in the cosmos, protecting the yin spirits here.

If it awoke from slumber, it would instantly erase Lu Yun and Qing Yu’s projected doubles.

“Over there!” Qing Yu pointed in a certain direction after some calculations.

An enormous golden palace appeared in front of them after an hour—the dao palace! This was one of the palaces located in the cosmos.

“There are chaos creatures inside, but no empyrean realm humans!” Qing Yu’s eyes lit up.

When Lu Yun had captured the empyrean humans from the second dao palace, they’d self-detonated when they realized they were prisoners. At the time, Lu Yun couldn’t be bothered to use a death art to resurrect these traitors.

The palace in front of them was staffed with neither chaos beasts nor empyrean human masters. Plainly, the chaos creatures felt this territory to be absolutely safe, that no immortal would dare bring trouble to them here.

“Alright!” Lu Yun smiled. “Stay here and keep track of these coordinates for me. I’ll turn into a Size Manipulation talisman formation and claim this palace!”

No ripples of existence traveled from their doubles, thanks to the properties of hellfire. They were solidly concealed in the cosmic deep. Lu Yun’s projection soundlessly made its way to the dao palace, then used Shapeshifting to turn himself into a Size Manipulation talisman formation!

The dao palace as large as a star immediately turned into a dust particle and vanished from space. 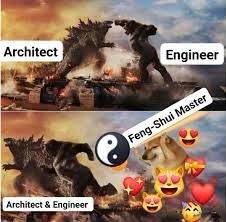 This meme by spiderman102. Check out my Discord for moar memes!

There's also some crazy fanfiction going on in the NECRO channel on the WW server lol.