Almost every major faction in the world of immortals had enrolled disciples in the academy, and some disciples had even reached the inner academy. Many of the smaller clans also joined en masse, entering the Dao Academy with their entire faction.

In the eyes of the world, the Dao Academy was a massive umbrella of protection, a towering tree that they could shelter under. They could use its name in all manner of lawbreaking and continue to enrich themselves in the new world order.

How very wrong they were, and realization of this hit them only now.

Immortal after immortal died ignoble deaths in this bloody purge of undesirable elements. Tens of thousands of immortals were involved before it finished, an abnormally terrifying number. Of those, the Lus and Qings numbered the greatest.

The Lu Clan was Lu Yun’s home clan and the Qing Clan where Qing Yu hailed from. The two factions were extremely brazen both within and without the Dao Academy because of this. Never had they fathomed that Lu Yun would be even more straightforward and decisive when it came to killing them. Any case that had to do with either clan resulted in Lu Yun personally executing the immortal in question.

As a result of this, Patriarch Lu Daoling of the Lu Clan resigned his position of academy protector and brought the experts of his clan to one of the most dangerous lower worlds—the Harshcloud Realm. His cultivation level had reached Supreme Immortal of Original Order, which put him very close to the next level that was the ingress realm.

However, seven Supreme Immortals of Original Order had already died in Harshcloud Realm!

Lu Daoling simply felt that he’d embarrassed himself beyond all measure and no longer had the face to remain in the Dao Academy. His descendant had created this wondrous establishment for the benefit of the entire multiverse, but his own kinsmen were sullying it. Though he’d been unaware of the unsavory acts his juniors had committed, he was still hard pressed to explain himself.

Lu Yun naturally wouldn’t allow any accidents to happen to these elders, so he sent his old trump card Kui with them.

Kui was the mythological one-legged beast of lightning that’d become Lu Yun’s Infernum. Now that his master’s control of the Tome of Life and Death had taken a step forward and the treasure further submitted in the chaos, Kui’s strength rose as well and he returned to the peaks he’d attained in the Primordial Era. He even broke through principal realm to supreme pure realm, the first of the Three Purities realm after the divine dharma realm, which came after dao immortal realm.

He was now on par with a human king of the Primeval Era and rivaled the four great emperors of the primordial world of immortals. With his name written in the Tome of Life and Death, a wisp of the treasure’s energy wrapped around him at all times. He was a walking door to the underworld; experts from hell could arrive in Harshcloud Realm any time they were needed.

Harshcloud Realm had been the biggest realm in the multiverse a hundred thousand years ago, so strong that it was able to rival the world of immortals! Their ruler, Immortal Emperor Harshcloud, had been so fearsome that he’d been able to suppress the ascent protocol, ensuring that his realm’s immortals remained on home territory.

In those times, the immortals of the lower realms found their way to immortality from the starting point of mundane cultivators. Having bypassed the void realm, they were the weakest of the weak when they arrived on the battlefield.

The world of immortals put down the rebellion without breaking a sweat. Zhenwu, Emperor of the North, smacked the principal realm Emperor Harshcloud dead with a single swipe. The Immortal Subjugation Seal that could suppress the ascent protocol also fell into the immortal emperor’s hand. [1]

The rising of Harshcloud Realm to conquer the heavens was well documented by later historians and stored in the ancient tombs. Thus, this particular realm’s name was viewed with certain awe in the current world of immortals.

Lu Yun had once thought that Fuxi was behind the countless tombs in the world, but the demon god denied responsibility when asked. That left it still a mystery as to who had built the tombs that forested the world of immortals.

Harshcloud Realm had been Lu Yun’s next destination; he’d be able to greatly raise morale if they were able to retake this legendary realm. The world of immortals would be immensely confident in facing off the dead spirits in seventy years if he were able to manage this feat.

However, he set this aside after the events of Dustfall Realm. He would personally oversee the reorganization of the Dao Academy and all of his forces, including Dusk Province.

What greatly set his heart at ease was Wanfeng’s steady hand at the helm of Dusk Province. Though there were some thugs in the province as well, they didn’t dare use Dusk’s name when breaking the law or oppressing others.

Wanfeng had once been Lu Yun’s head lackey, but she also hated misbehavior like this with a passion. Thus, when she first grasped the reins of power in Dusk Province, she ruthlessly and efficiently straightened out affairs in all three hundred sixty-five provincial cities.

Lu Yun wanted to have her take over the Dao Academy as well, but ultimately backed down after coming face to face with her puppy dog eyes.

These days, the Dao Academy was internally reconstructed. Though many disciples withdrew from the academy for a variety of reasons, Lu Yun didn’t care about that. His original purpose in establishing the Dao Academy was to share his knowledge with the rest of the world. The academy was his medium with which to do so, but the fact that he was the master of the sacred land of immortal dao was a mantle that the peak factions of the world had forced on him.

If it were up to him, he wanted to drift around as a carefree hermit, to explore with Qing Yu and take in the sights of the world. But with every action the rest of the world took and word they spoke, they had slowly backed Lu Yun into becoming headmaster of the Dao Academy.

An enormous projection of the Karmic Tree appeared at the foot of Mount Xuanhuang. Its power enveloped the Dao Academy and unfurled into an enormous system of merit and virtue. The Karmic Tree could collect goodwill and identify good from evil, and the apex of goodwill was virtuous merit!

Since he couldn’t change innate character and thoughts in a short period of time through education or subtle influence, he would force the change on the immortals.

Everyone thought both good and evil thoughts; there existed no one since the dawn of time who had stuck resolutely to only one side. It was impossible for someone to do only good or do evil in their entire life, so this was a makeshift measure that Lu Yun was forced to rely on.

He didn’t hope that the academy would graduate saints, but at the very least he hoped it wouldn’t produce devils that ruined the world.

“What difference is there between the Dao Academy now and the human race of the Primeval Era, when they established the hell that judged one based on merit and retribution?” The little fox took Tushan’s form and looked at Lu Yun with an unpleasant expression.

That all races had betrayed the humans and pulled them down from their perch could be attributed to secret instigation and stirring of the pot from others, but was also heavily tied to the human race creating a system of virtue according to their own standards. Humans rewarded good and punished evil as they saw fit, passing judgement on the multiverse.

All life chafed under such a world order. The final rebellion to end human rule had also been an outlet to vent their frustrations, and now the little fox seemed to foresee Lu Yun headed down the same path. If things progressed as they stood now, then the immortal dao of all would become Lu Yun’s immortal dao. After all, he held the wheel of reincarnation in his hands.

“Eight hundred thousand! Eight hundred thousand innocents died to academy disciples in less than thirty years!” He clutched his head with some pain. Though his hands were also stained with blood and he’d killed more than he could count, all of those had been his enemies.

It was either their death or his.

The eight hundred thousand dead immortals were all innocents with no grudge against the Dao Academy. Many of them were stunning geniuses who would one day develop into a heavyweight of the world. Their only crime had been that their wealth caused another’s greed, resulting in their deaths to academy disciples trained by Lu Yun’s system.

Tushan’s eyes dimmed as well. “Perhaps Tianqi’s original intentions in building his system of merit and virtue echoed your current thoughts… he only wanted the denizens of hell to not bring disaster to others.

“But if this system continues to develop, it will impact the entire world of immortals and multiverse. It will proceed in ways that you don’t foresee.” The little fox turned grave, “Cease your actions immediately, or I’ll destroy the projection of this tree!”

1. This was the treasure in the immortal emperor’s tomb in the Central World, chapter 738. 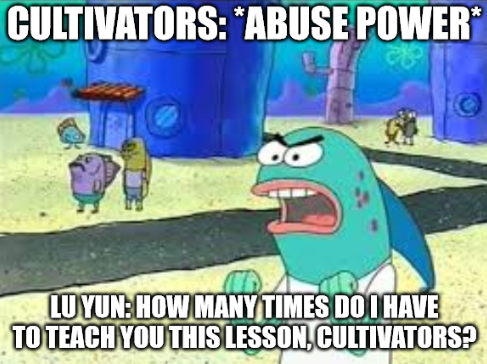 From YellowChopsticks aka Spork on Discord.