Chapter 962: Palace of the Main World

The darkfuries were used to life here. If Lu Yun forcefully sent them to the world of immortals, they might fail miserably at adjusting to their new surroundings. He also didn’t dare break their curse either. If he did so, they wouldn’t be far from true extinction.

They hadn’t borne him any killing intent from start to finish as their only goal was to fill their stomachs. It was plain to see that they didn’t harm humans not only because “they” forbade it, but because the darkfuries themselves didn’t want to.

Lu Yun believed that once these abandoned races attained supreme power, they would achieve a series of earth-shattering feats. The cultivation methods he’d created weren’t simple, primitive ones. They encompassed a myriad of changes and fostered infinite possibilities.

Armed with these cultivation methods and combat arts, the darkfuries would be able to usher in a new era for themselves.

“This is the main world of the Quiet Realm.” Lu Yun suddenly stopped in space.

In all of the realms of the multiverse, each of them possessed a main world. The boundless night sky stretched on beyond the main world, similar to the setup of the world of immortals. Though the Quiet Realm was a newly formed realm, it held the complete structure of one.

Its main world was similar to all of the lower worlds—under attack from dead spirits. Despite being the main world of this new realm, it was also almost completely overrun. Ruins and wreckage strewed the land; countless living beings struggled in the mouths of dead spirits.

An enormous palace hovered outside the main world, extending a giant boundary onto one of the continents below and protecting the denizens there. At the same time, it, too, was under attack.

The main world of the Quiet Realm wasn’t a star, but a world embedded in the void. The natural walls resulting from the laws of a world separated the world from the cosmos.

When Lu Yun landed on the ground, he immediately sensed the dense concentration of the world’s qi and the strength of the immortal dao.

All was still and quiet within the palace with no signs of life inside it.

“That’s it!” the little fox shrieked. “The direction I calculated is there. Your dao fruit should be within that palace!” She popped out of his embrace with great excitement.

Lu Yun opened the Spectral Eye on the palace, but saw nothing apart from information of the dead from it. Large numbers of creatures had died there, from the Primeval Era of human dao to contemporary times.

He shook his head when he read even a few connate great gods among the dead. Entering the palace right now would be a very unwise move. If even great gods had died inside, there was certainly an uncommonly terrible danger within. It would run him right over, leaving him no idea of how he’d died.

“Let’s get an understanding of how things are like in the main world.” He didn’t observe any activity from the Dao Academy here, so it didn’t look like any academy disciples had descended to the Quiet Realm.

The realm’s main world was incredibly vast, on par with a major of the world of immortals. However, dead spirits filled every nook and cranny of the world.

Most of its places had been razed to the ground, including the largest continent of the world. The only place that’d been spared was the continent protected by the palace. However, it was only roughly six hundred thousand kilometers across—about the same size as a province in the world of immortals.

A horde of dead spirits mobbed Lu Yun and the little fox the second they landed. Since Lu Yun possessed the Tome of Life and Death and hellfire, he wasn’t the least bit daunted. Displaying his peak peerless immortal cultivation to its highest, he cleared the dead spirits around them and retreated to the safe continent at the same time.

“Eh? Someone’s come from the stars?” Surprise flashed through the eyes of immortals on the continent to see Lu Yun retreating their way. “I hadn’t thought that anyone else would dare descend here apart from those of us from Truespirit Major and the Dao Academy. Tsk… tsk tsk tsk. They really have a death wish, huh?”

This group of immortals was disciples of Truespirit Major—where the Corpse Refiners reigned dominant. Almost every citizen of that major cultivated the ancient path of refining corpses. Since it’d become part of the immortal dao, it was now a properly legitimate great dao in its own right.

Yin Jiuying, lord of Truespirit Major, had expressed his wishes to Lu Yun to integrate the dao of corpse refining into the Dao Academy. His request was granted, but apart from Truespirit immortals, no one else was particularly interested in learning it. Naturally, Lu Yun added it to the academy because this dao was highly useful for tomb raiding. Even the most fearsome zombie could be refined into a battle zombie for immortals.

There was no inherent good or evil in dao. That existed in people instead.

The Dao Academy was an enormous melting pot and melded together the numerous great daos beneath it. It also continuously forged new paths out of what it already contained. Corpse refining had originated as a secret art, but grew into a great dao after joining the academy.

“Some junior brothers from the Dao Academy have entered that palace to explore it and their status is unknown… And now we have a newcomer from the stars. Do we help them, or not?” A Corpse Refiner asked doubtfully on seeing Lu Yun fight his way to their position.

“We help him!” sneered another. “We can’t just watch him die in front of us, can we? A mere peerless immortal can only be… Bah! His Lordship has forbidden us to refine the corpses of immortals!”

Dissatisfaction crept into his tones when something occurred to him.

Corpse Refiners, whether in the Primordial Era or modern times, once knew no taboos or prohibitions. They would even refine people alive! But ever since the dao of corpse refining became a great dao beneath the immortal dao, the Truespirit lord forbade Corpse Refiner disciples to take the living, or even recently dead immortals as their battle zombies.

Any violators would be shown no mercy.

This decree raised stunning conflict in the major as there was naturally a great deal of protest. In the ensuing protests, Yin Jiuying scattered the souls of several dao immortals to ensure that his orders would stick.

“Alright, we’ll save him! I’ll send my battle zombie to bring him to us.” A female disciple summoned the corpse of a primordial immortal and sent it flying through the air. It departed from the boundary’s protection and flew toward Lu Yun.

Since battle zombies weren’t alive, they didn’t give off the presence of life and thus wouldn’t be attacked by the dead spirits. It could be said that Corpse Refiner disciples were most at ease in the battlefield against dead spirits. 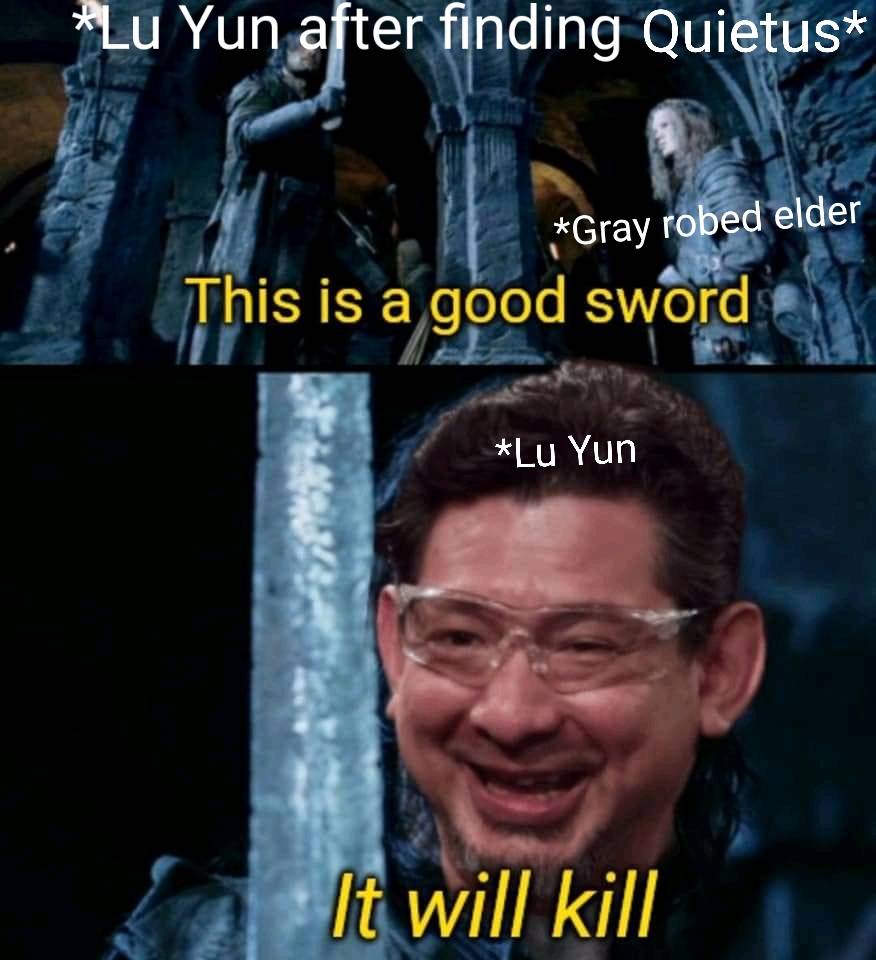 I give you... moar memes from Bel.
Bookmark