Lu Yun frowned when he noted the darkfuries’ behavior. He blasted away with a burst of tyrannical strength and sent them reeling backwards. However, they desperately flung themselves forward again when they recovered their balance. They had eyes for nothing but the food in front of them.

Sorrow deepened in Lu Yun’s eyes, and even the little fox’s fury slowly abated. He shook them off the wild boar again and again, but they always launched themselves back at the animal after getting to their feet.

Finally, Lu Yun rushed over and split himself into a myriad of copies, punching every single darkfury on the premises regardless of age or gender. A din of wails and howls rose from the terrified group and they finally changed their focus to the human youth. They craved food, but they were more afraid of death.

“You!” He stomped a random darkfury and coldly ordered, “Roast this wild boar like you were just talking about! I’ll kill you if you dare eat any meat with a hint of blood in it.”

Wild savagery’s turning point into civilization was the usage of fire. Only when living beings walked out of the age of drinking blood and tearing into raw meat did they slowly develop culture.

Though Lu Yun had never encountered the darkfuries before, he knew that these were once a guardian race of the humans and great experts of hell. Though they were now a shadow of their former selves, he would never permit their descendants to drink fresh blood like wild beasts, no matter how hungry they were.

Under close scrutiny from Lu Yun’s consciousness, the trembling darkfury approached the wild boar and summoned fresh springwater to skin and clean it. The others cautiously walked up and helped him as well.

Darkfuries were cultivators skilled in combat arts. They strongly repressed their hunger and desire to start a flame and roast the wild boar. Once the meat was thoroughly cooked, they could no longer resist their cravings and dug in with ravenous gusto.

Lu Yun watched them silently. Reason returned to the group when they’d had their fill and their eyes no longer glowed green.

“Milord!” The old darkfury from before stood up and bowed respectfully to Lu Yun. In this moment, he seemed to regain something that’d been lost long ago—his dignity.

“What is your name?” Lu Yun asked.

“In response to milord, I have no name. None of my tribe have names,” murmured the elder. “We’ve become orphans of the universe ever since the destruction of the human dao. The master of the realm does not permit our entrance to that flourishing world, so we can only roam this newly born one.”

Lu Yun nodded slightly. In the waning days of human dao, many races under its banner had turned traitor to give humanity a fatal blow. But the darkfuries and a few rare others in hell had steadfastly stood on humanity’s side until hell itself had been shattered. They’d been exiled by the new rulers and left to wander around the newly born worlds.

After the establishment of the immortal dao, everything about that war had been concealed and so all of these races were completely forgotten. They were the lost races of the world, doomed to be eternal vagabonds around the boundaries of the realms.

But it was also because of this that they didn’t forget their past.

“You can go back now,” Lu Yun said softly to the elder. “The human race should pay their debt to you.”

“We can’t, none of us can go back.” The elder shook his head. “Milord, a new great dao runs through the heavens. They call it the immortal dao.

“We are the abandoned races and can’t assimilate into it. We can’t practice immortal dao either.”

The elder stretched out his hand and showed a laughing and crying ghostly face materializing on his wrist—an akasha ghost.

This face was also a curse, a curse that forever cut off the darkfuries from the immortal dao. It wasn’t a curse on the dao itself, but on a race and a bloodline. The origin of the curse was the ancestor of the race—the Darkfury Emperor.

His kinsmen also showed the mark on their wrists, imparting a sinister atmosphere to their surroundings. They could coexist peacefully with the dead spirits because of this curse. It tormented all generations of darkfuries with the inability to become part of the immortal dao and return to a living world. They would have to drift around on the edges of the realms for all eternity.

Whether it was the darkfuries or any other races in hell, they were exiled to the Quiet Realm forever.

Lu Yun had once thought they’d been completely exterminated. To think they lived on without dignity and hope here! The little fox’s fury completely vanished; she looked at them with only pity.

“Since you can’t go back, then… stay here.” Lu Yun sighed and took out a few cultivation methods with a wave of his hand.

These were human dao methods that he’d invented in the great wilderness, the most primitive methods of their kind. Though they were categorized under the human dao, they were born beneath the primitive great dao. One could practice them even in the absence of human, immortal, and great dao.

Lu Yun could tell that these darkfuries cultivated the fragmented methods of the human dao era. They were much more refined after hundreds of millions of years of improvement, but were also much less than his original ones in a place like this.

“Take these.” He imprinted the methods on their minds.

Their bodies shook and they looked at Lu Yun in a new light. A chord resounded from deep within their souls. This ordinarily looking young man should have something to do with that mighty figure of yesteryear!

“I can tell you how to break the curse,” Lu Yun continued. “Kill and eat humans. That will dispel the curse in your bloodlines.”

Their eyes grew even bigger.

“You can tell the other forgotten races how to break the curse and also share the cultivation methods I just gave you.” Lu Yun turned and left with the little fox.

Though this newly born star was a barren place, it wasn’t without food. These darkfuries didn’t have the ability to take it, but would regain strength with his cultivation methods and survive in this world.

There were also humans present on this world as well.

“Patriarch!” The darkfuries clustered around the elder.

“Though we have no direct relationship with the humans now, we would rather bear the curse than kill and eat them!” the elder declared firmly. “Humanity is our great benefactor and we will not harm them even if we are eradicated ten times over, to say nothing of a curse!” 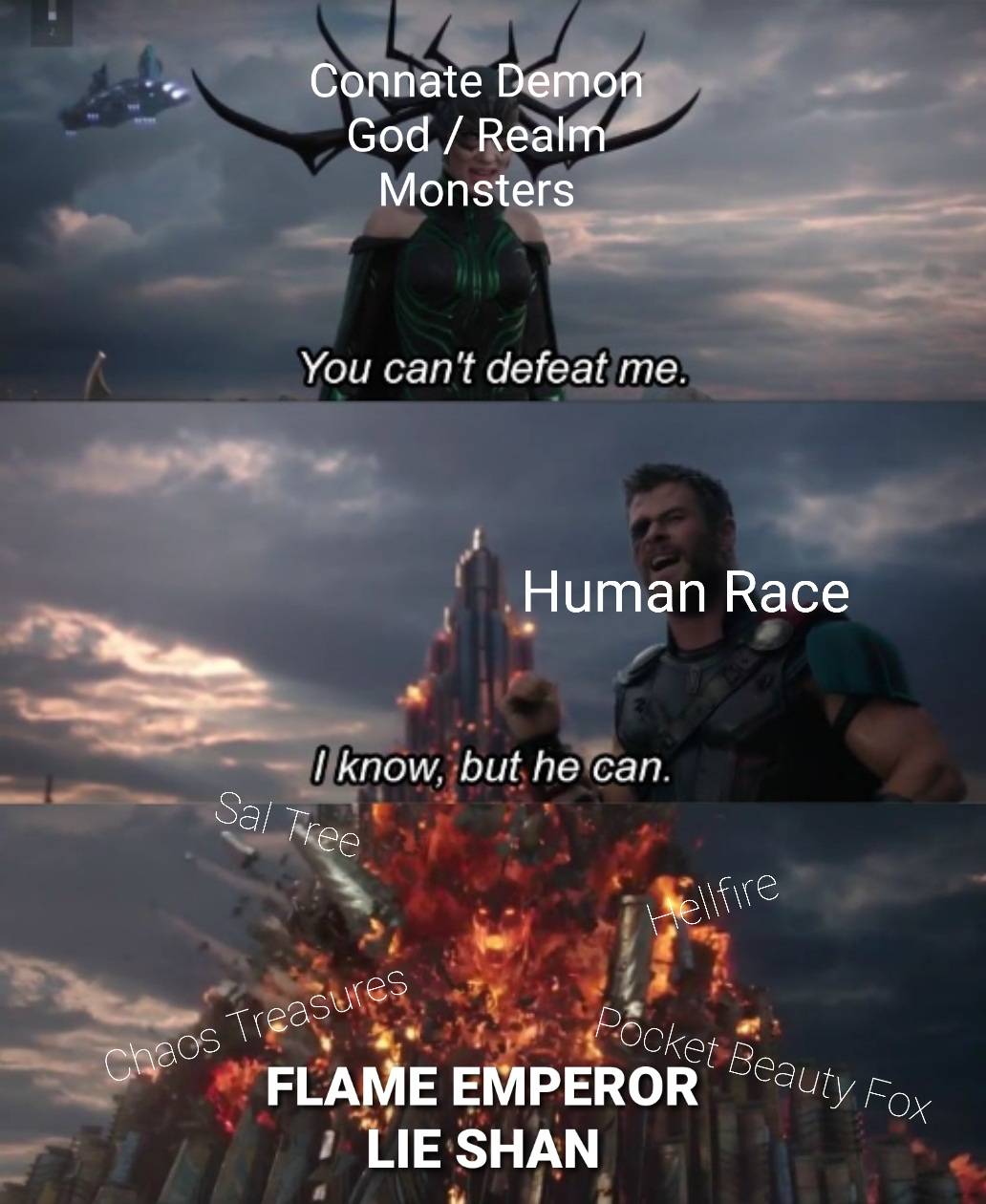 Meme courtesy of Bel on the WW Discord.