Chapter 912.2: The Flame and Yellow Emperors

There was a fatal injury inside Fuxi’s body that constantly ate away at his life force. He didn't have much longer to live. He might look and act fine for the moment, seeming to possess vigorous vitality, but the sand in his hourglass was running out.

Lu Yun didn’t want to wait until the holy emperor was on the brink of death, just in case the unexpected happened.

Fuxi stared deep into Lu Yun’s eyes before the great dao in his body shuddered and broke apart. His eyes immediately dimmed and his presence began to fade away.

“Resurrection!” Lu Yun shouted, sending the hellfire around him surging with activity. They churned into an enormous fiery tornado that blasted into Fuxi’s body.

“This… I…” Fuxi stared dumbly at his hands, disbelief writ large in his eyes. “I’ve not only been reborn, but all of my old injuries are gone and I’m back at my peak again!”

He’d once battled fellow demon gods to protect the human race and suffered incredible injuries for it. Those old aches and pains had forever kept him from reaching his peak again. With this resurrection, he’d been restored to his prime.

“Fuxi thanks fellow daoist for your boon of a new life!” Fuxi knelt to the ground in a bow of gratitude.

Lu Yun didn’t dodge this grateful display. To give someone a new lease on life was a tremendous boon and if he refused this bow, it would turn into Fuxi owing him a life. That would cause karmic repercussions and eventually, disaster would find its way to the demon god.

Though just a bow was hardly enough to repay such a momentous favor, that perfectly cancelled out his actions in Lu Yun’s mind. He hadn’t saved Fuxi to put the legendary figure in his debt.

“I hear that Leize is also injured…” Lu Yun mused with a glance at the kneeling demon god.

Leize, Huaxu, and Hongjun’s true forms were crucial for their efforts. Leize’s death, even for a split second, would result in terrifying repercussions that would allow the realm monsters to break through the barricade and occupy the world of celestials.

What would happen after that… Fuxi didn’t dare imagine it.

“The highest reaches of the world of celestials… can it be…” A certain place suddenly occurred to Lu Yun.

“That’s right, the World Gates.” Fuxi nodded. “But realm monsters have been exterminated in your time and the problem you face is something even more terrifying than them.”

After leaving the netherdark, Lu Yun put on a disguise before paying the human tribes a visit.

The Yan Tribe was still based in the Wei River basin, but it wasn’t the faction it’d once been. It’d joined the Xiong Nation ten years ago and become the greatest tribe in the kingdom.

However, the Yan Tribe’s contribution to humanity couldn’t be erased. They still retained their identity even after falling under the Xiong banner.

Ah Niu had evolved into an independent divine spirit with Ah Bao’s help and had followed Shaodian, Jiang Ti, and the Yan priest to Mount Buzhou. Ah Bao and the little fox were now at Qingqiu Mountain.

Though Ah Bao was the Wei river god, she was first and foremost the mountain ghost of Mount Qingqiu.

Things weren’t too calm in the great wilderness at the moment. The establishment of human dao and unification of humanity hadn’t gone unnoticed by other factions. Now that cultivation methods had come into being, so did the other races embark on their own cultivation journeys.

Though they needed to take human form to do so, that wasn’t a shameful thing to do after the connate demon gods capitulated to the requirement.

Apart from the monster spirits, other latter-day descendants in the great wilderness also began to rise. Though the dragons, phoenixes, and qilins were similar to monster spirits, they formed their own races instead of joining together. Traces of their activity slowly filled the land as they basked in newfound strength. Humans, however, were still the undisputed greatest race out of these latter-day descendants.

The rise of so many new groups naturally drew the ire of the connate races. To be a connate race meant that one was born with a cultivation level, such as the Bifang. They’d always firmly believed in their superiority over pathetic latter-day descendants who had to struggle their way into strength. Thus, chaotic times engulfed the great wilderness.

The human civil war had ended with the construction of the Xiong Nation, but pitched battles between other races in the great wilderness were just beginning.

Many latter-day descendants went extinct from the domination shown by the connate races, but there were also numerous connate races that were annihilated in retaliation. Though humans were attacked by many connate and latter-day races, their position remained as steady as a rock.

Yellow Emperor Xuanyuan was a man of great talent and bold vision, and he ruled in a clear and orderly fashion. His master and kingmaker Guang Chengzi was even more unreachable, single handedly beating off several demon gods who ambushed him together.

The current human race was based out of the Ji River basin and slowly extending past its original boundaries. Zhuolu was the capital of the Xiong Nation and humanity’s first constructed city. [1]

Mentally reviewing some of the intelligence he’d received, Lu Yun discovered with great surprise that he’d missed out on some of the most exciting years in humanity’s rise. The great war of Yan and Huang, the Battle of Zhuolu… it was after this era that humanity truly walked down the path of civilization. He hadn’t facilitated or interfered in any of it; human development had depended entirely on itself. [3]

On this day, he reached the city of Zhuolu.

It was rather simplistic and shabby compared to the large cities in the future, but it was a magnificent construction given current times.

“What a pity that there’s no protection formation around it or feng shui layouts. It’s just a bunch of random building clusters.” Lu Yun frowned slightly as he surveyed the city. Since Fuxi hadn’t yet passed down the dao of formations, he plainly felt that humans still didn’t have the ability to protect themselves.

“Human dao has been established and shuffles along to perfection. The various supplemental paths should be coming into existence as well.” Lu Yun mused deeply for a moment. “But again, it shouldn’t come from me. If I imprint formation, talisman, equipment, and pill dao into the current human dao, someone will stop me from doing so.

“Ah… Hongjun…” He tilted his head up at the sky.

Though Lu Yun stood in the center of the city, none of its citizens detected his presence. They went about their business, not seeing that another being stood amongst them.

“Sigh…” he heaved a heavy sigh in the end. Though humans were the peak race of the great wilderness, they were far too weak in the eyes of the connate demon gods. They were the ones who’d come baying for blood if the supplemental paths appeared in the world.

The demon gods had been willing to bow their heads to humans and take human form for the pursuit of strength and realm of creator. There was no telling what they’d do if they saw the supplemental paths.

“Why do you not reveal yourself, fellow daoist?” A clear voice brimming with authority sounded in Lu Yun’s mind.

Lu Yun started, then looked at the tallest building in the city. Its doors were wide open and a man came striding out, clad in imperial yellow robes and a crown with a veil of golden beads on his head. He took one step forward and landed in front of Lu Yun, looking at the visitor with a glint of battle intent.

The Xuan Yuan who would sacrifice his life and great dao for the future immortal dao and all life!

The battle intent sparkled out of Xuanyuan’s eyes and he looked blankly at Lu Yun. “Fellow daoist departed for fifty years and now returns to humanity’s capital. Are you not here to take back your position?”

1. The Battle of Zhuolu was the second battle in the history of China as recorded in the Records of the Grand Historian. It was fought between the Yanhuang tribes led by the legendary Yellow Emperor and the Jiuli tribes led by Chiyou. It was first the Yan Emperor against Chiyou, but the emperor lost the fight and asked the Yellow Emperor for help. The battle was fought in Zhuolu, near the present-day border of Hebei and Shanxi.

2. Chiyou was a tribal leader of the Nine Li tribe in ancient China. He is best known for being a king who lost against the future Yellow Emperor during the Three Sovereigns and Five Emperors era in Chinese mythology. According to Song dynasty history, Chiyou's surname was Jiang and he was a descendant of the Flame Emperor.

Based on legends, Chiyou had a bronze head with a metal forehead. He had four eyes and six arms, and wielded terribly keen weapons in every hand. Some sources describe him with certain features associated with various mythological bovines. His head was that of a bull with two horns, although the body was human, and his hindquarters were those of a bear.

Not much is known about this battle since it, along with other events of the era, are clouded by mythology. Thus, the historical accuracy of accounts of this battle is disputed. Chinese historiographical tradition places it in 26th century BC.

Under the totems of the black bear, brown bear, pixiu, leopard, and tiger, the Youxiong armies of the Yellow Emperor met the Shennong armies led by the Flame Emperor in Banquan. After three major engagements, the Flame Emperor lost and surrendered leadership to the Yellow Emperor. The Youxiong and Shennong tribes then formed the Yanhuang tribes, incorporating the small tribes around them.

To this day, Chinese people still call themselves “the Descendants of Yan and Huang”. 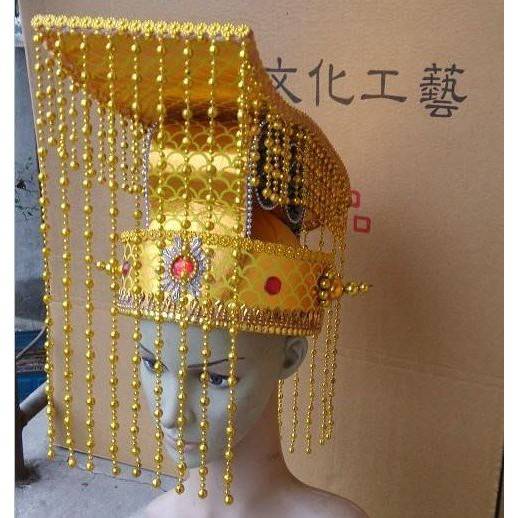 Ohhh. Snap. And I hoped everyone enjoyed the impromptu history lesson today. There's a ton more you can read up on the beginning of Chinese civilization if you're interested.

This is a picture of a Chinese emperor's crown, which is what Xuanyuan is wearing.