“...no.” Ge Long chuckled wryly. “Someone’s already interfered with this one and attracted the judgment of the heavens, instead. I managed to take advantage of the opening they created and beat up the will controlling everything, then wrested control of the tribulation away from them.

“As for tribulations that aren’t controlled by the will of a living being, there’s nothing this old servant can do.” Ge Long felt a little vexed himself. If he really could manipulate tribulations, he would’ve dispatched chaos tribulations to eradicate all the nasty things in the world a long time ago.

“So you mean that… there’s someone out there who can control tribulations?” The possibility suddenly struck Lu Yun. If that were so, he would have to stay extremely vigilant. Heavenly tribulations were a sword hanging over every living creature. If someone could command them, that could bring about unimaginable consequences.

“Indeed, milord!” Ge Long nodded. “There’s someone who can do so through influencing the immortal dao. But fortunately, that person’s cultivation isn’t all that strong, so he can only affect tribulations in small ways.”

“I have to find him and kill him!” Lu Yun’s brows creased in a tight frown.

“Milord, this old servant is here to help with your tribulation. I can’t reveal myself, so I can only use the immortal dao’s aura to conceal my presence. I also have to warn you that this heavenly judgment is too powerful for your lightning-absorbing art to completely swallow,” Ge Long patiently explained.

He couldn’t expose his presence, or the fact that Lu Yun could absorb tribulation lightning. The only reason he’d managed to evict whoever it was manipulating this tribulation was because he’d put in a personal showing and summoned the will of the land.

Ge Long was a very peculiar existence. Ever since appearing at Lu Yun’s side, he’d always conducted himself with utmost caution. It wasn’t until he entered the ancient tomb at the center of Dusk Province and swallowed the cultivator-destroying monster did he fully return to himself.

“Milord, let’s discuss the one who can influence tribulations after we’re done here. This old servant can’t fully control this heavenly judgment, so we have to proceed as soon as possible!”

The moment Ge Long’s voice fell, the world shook as a gigantic black bolt of lightning drew a strange and terrifying arc in the air. As it slammed down toward Lu Yun, not a single sound could be heard in the realm except for one thing: the devastation of the heavenly judgment!

“What incredible power… So this is a heavenly judgment. Although it’s not as strong as the chaos tribulation that destroyed Witherdew Major, it’s still something that ordinary cultivators can’t withstand. Eh?! What’s that??”

Just when everyone was expecting to see Lu Yun obliterated by lightning, they witnessed a turnabout straight out of a tale.

Something that looked like an iron rod more than forty meters long had appeared beside Lu Yun. Previously aimed at the young man, the lightning suddenly deviated from its course and crashed into the rod instead.

The iron rod vibrated violently at the impact and absorbed the energy of the heavenly judgment, ultimately defusing it so that Lu Yun’s Thunder Palmstrike could swallow it whole.

Ge Long looked vacantly at Lu Yun. What in the heavens had happened just now?

“Milord is as mighty as ever. It seems this old servant has overthought things.” He beamed with happiness.

The third, fourth, and fifth bolts of lightning followed in quick succession, but the iron rod redirected all of them to itself.

All of the nearby immortals looked on, dumbstruck.

Lu Yun had expected something unforeseen to happen during his tribulation. While the Thunder Palmstrike could absorb tribulation lightning, it wasn’t without its limitations. For one, it couldn’t absorb lighting beyond a certain threshold of intensity, like the chaos lighting that’d destroyed Witherdew Major.

The one he’d crafted was no ordinary one. He’d condensed the Thunder Palmstrike’s lightning-attracting ability into 3,650 talismans and combined them with the lightning rod. In addition, the rod itself had been refined, not from ordinary materials, but from a Ten Orientations Stone!

As a material of extreme yin, the Ten Orientations Stone was unique to hell. This particular piece had been supplied by the merchant alliance.

Lu Yun had once obtained one from the Panorama Pavillion, but the merchant alliance had recently found a second one. When he’d heard the news, he’d immediately sent over a lord-grade ship to trade for the stone, then used it to craft his lightning rod.

A Ten Orientations Stone was incomparably hard itself. Making it the core of the item, he’d tempered it repeatedly with hellfire for a thousand years, meshing many other lightning-attracting materials into it.

Even without deploying 3,650 Thunder Palmstrike talismans in conjunction with it, the lightning rod could have dealt with most tribulations by itself. Incorporating the talismans on top of it was adding wings to a tiger; it could attract even chaos tribulations now!

Up in the firmament, the lightning of heaven’s judgment flowed like water and transformed into an endless tide of black lightning bolts furiously smiting the rod. Lu Yun stood beside it, entirely unaffected.

It was also thanks to Ge Long curbing the judgment’s power from the inside that he was having such an easy time of things. Otherwise, such a terrible judgment would’ve certainly evolved into a sea of lightning, or perhaps a lightning mountain.

Had that been the case, Lu Yun would’ve been forced to step into the breach himself and use the Thunder Palmstrike to lessen the pressure on the lightning rod.

“Things have changed, be ready to interfere with his tribulation!” coolly ordered numerous immortals surrounding the North Sea, their expressions foreboding.

“Interfere? How exactly do we do that?!” whined some returned-void cultivators. “Don’t you see the rod absorbing the judgment lightning? Even if we go inside and amplify the heavenly judgment’s intensity, it won’t be of any use at all!”

More importantly, Lu Yun wasn’t expending any effort to resist the tribulation, so he was free to slay them with a slash through space before they could even draw near the tribulation clouds.

“How do we know without trying?” One of the arcane dao immortals grabbed a few peak returned-void cultivators on the verge of facing their own tribulations, and tossed them inside the tribulation without hesitation.

The clouds shook the moment the cultivators landed in the area of effect and struck them with a torrent of black judgment lighting bolts, frying them to a crisp. But even so, the trial didn’t grow in intensity.

“Are you people dumb?” Lu Yun looked back at the arcane dao immortal. “This is a heavenly judgment, not your run-of-the-mill tribulation… Or did you think the cultivators you threw in deserved judgment from the heavens themselves?”

Heavenly judgments were a completely different beast from heavenly tribulations. Only cultivators who’d attained an unimaginable realm, or those who’d earned the wrath of the heavens, could inspire a reaction.

Such a judgment was the strongest of tribulations. To attempt to amplify its intensity by inserting a few people, or even a hundred others, was nothing but sheer delusion. Even without Ge Long, Lu Yun would have nothing to fear.

“Everyone, attack! Destroy the rod beside him!” someone suddenly roared. 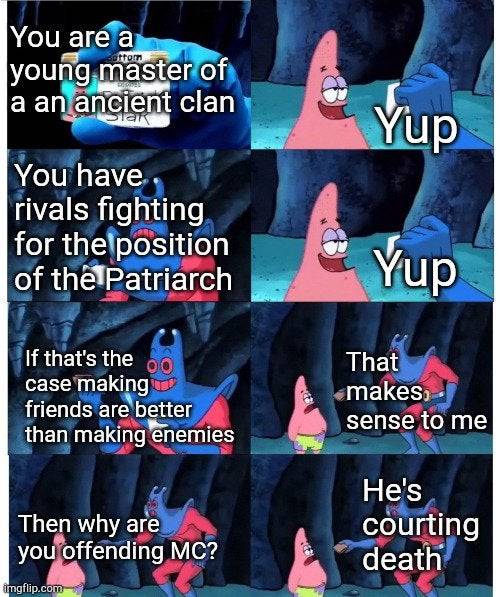 Damn guys, thank you so much! Got some new reviews already and y'all even mentioned the specific details of what you really love about NECRO. Please keep 'em coming and    to all of you gosh. We're at 99 reviews atm!

Always said I did have the best readers, and I'm willing to fight any translator on that heh. And LEL to Belkar saying Ge Long is the true MC. Dude, I thought the general consensus is that the Tome of Life and Death is?

I leave y'all with this meme from Zonesylvania on Discord.

NECRO is 600 chapters old! Red envelopes for everyone!

[edit] A bumpaaa cause guys, I still got stuff from local artists left over = =.