As we've promised for a while now, the new 2022 look for the Wuxiaworld website is finally about to arrive - in approximately 24 hours at 2 PM EST on January 18!  The superb Radish team has really done a tremendous job working with our existing team in helping us redesign and build up the site to a more modern, professional appearance.  We are supremely excited to unveil the fresh new look, so please stay tuned and get hyped!  I particularly love the next dark mode...

At Violetgrave’s suggestion, Lu Yun glanced toward the light and was promptly dazzled by the radiance.

The ray of ethereal sword light slashed toward the lungs with bewitching simplicity. There was nothing complicated at all about the attack, yet Lu Yun saw thousands of permutations hidden therein. This was no longer a sword art, but an exhibition of sword dao.

“How can this be?” His mind exploded with incredulity. Something surfaced within him, then was promptly reclaimed by a layer of mental haze. He didn’t understand; how could such a straightforward stroke be imbued with so much meaning?

Even a pure sword immortal would be incapable of such a feat! This was beyond the realm of technique and, in fact, infinitely approached the dao.

Was this Violetgrave’s true strength?

He opened his eyes as wide as he could, both physical and Spectral. He was completely fixated on the sword—it was paradoxically slow and incredibly fast all at once. The stroke was so powerful that it affected the flow of time around it.

A pained shriek came from the giant lung as a monstrous face appeared upon the organ’s surface. Contorted in an expression of immense fury, it bit down viciously upon the sword light.

The sword pierced a gaping hole through the face’s mouth, rupturing the lung in a shower of inky blood. The shrieking grew louder and shriller, sounding like a butchered animal’s death cries. By now, the lingering violet in the air had all but dissipated, but the sword intent remained. Cut after cut soared toward the giant lungs with invisible determination.

“What kind of sword technique is this?!” Lu Yun’s focus wasn’t on the lungs anymore. He was completely absorbed in Violetgrave’s sword dao instead.

“Violetgrave!” an outraged roar cracked through the air. The yin-yang beast that had turned into a statue earlier returned to its original form and substance. It pounced with a frantic howl at a faint violet shadow in a certain corner.

“Hmph, I knew it was you!” Violetgrave delivered another slash with a small huff. The blow was identical to her last, but the yin-yang beast had become very different.

Gone was its cowardly behavior from moments ago. Another will seemed to be coursing through its body, granting it a new, terrifying strength.

It waved its four foreclaws around wildly, unleashing wave after wave of rippling black-and-white air. Miraculously, they managed to block Violetgrave’s attack.

Evidently, Violetgrave had recognized the yin-yang beast’s true identity long ago, but had held back earlier to avoid attracting the hidden person’s attention. However, her attack on the lungs was more than enough commotion to awaken this place’s master.

“Quick, do whatever you need to take away that lung! I’ve killed the divine spirit inside!” the sword’s voice filled Lu Yun’s head.

Unfortunately, her warning fell on deaf ears. The young man was still immersed in her sword dao. Her battle with the yin-yang beast had taught him many extraordinary lessons, several of which went far beyond the realm of mere swordplay.

“Tsk…” Violetgrave noticed his distraction with some annoyance. Lu Yun’s inopportune reverie and immersion in the pursuit of sword dao was definitely outside her plans. “Damn it, this yin-yang beast is only a replica of that one. If we stay here much longer, the actual person will notice, sooner or later.”

She became rather anxious, but there was nothing to be done now. She was quite strong, but the yin-yang beast’s original was stronger still. Right now, delaying it was the only thing she could do.

“I’m still sleepy… and so hungry… maybe I should eat the yin-yang beast…” Muttering to herself, Violetgrave snuck a glance at Lu Yun instead. “Can’t eat that, not that one. That’ll get stuck in my teeth…

“What to do, what to do… This is the underworld, so that old thing can arrive at any minute. If he notices me, he’ll try to refine me for sure.” She turned around in circles as she deliberated with dismay through her battle.

The coffin lid opened with considerable noise and a giant skeletal arm reached out toward the lung.

“What is that?!” Violetgrave screamed at the sight.

The yin-yang beast battling it out with her was similarly terrified and screeched to a halt.

“Who is ‘he’?” Violetgrave looked instinctively at the yin-yang beast, who wasted no time at all in re-petrifying itself. It fell to the ground with a resonant thump, bouncing a few times before coming to a complete stop.

The sword spirit bunched up her slender eyebrows, noting that the will upon the yin-yang beast had departed.

She peeked at Lu Yun again. The young man’s eyes were now screwed shut and he’d begun waving his hands maniacally in the air, mimicking her sword strike as best he could.

A second hand came out of the coffin, grabbing onto the lungs alongside the first. The ruptured organ was slowly dragged into the ancient doors, after which they slammed shut.

“Those… are the Gates of the Abyss of the human race,” Violetgrave murmured. “A fragment of hell lies behind them… so that’s where the Nether Fire is after all.

“But, it’s not really hell either… it’s something even scarier than that. Could he have been right? Is there really a Hell in this world?”

She shook her head, then melted back into the body of her sword. The blade then vanished into Lu Yun in a flash of light.

“Too hard, too tough. My teeth would hurt! There’s no way I’m eating him… for real this time!

“What a disaster, what a loss! He’s refined Violetgrave already, so I can’t leave… and I can’t eat him, either. Am I supposed to follow him around for the rest of his life?!” Violetgrave’s dismal wail echoed through the air.

After the lung was dragged into hell, the offerings upon the altar disappeared. The only things that remained were the four nests, and the depths of the fifth abyss of divine burial fell into complete darkness.

“This is the essence of sword dao. Far more than just the sword, it embodies all things!

Two sparks of steel flashed through Lu Yun’s eyes when he next opened them. “The sword methods I used to use… Vast Dragon Seaturner, Starstream Stroke… what a joke! A single stroke from Violetgrave can stomp the intent in all of them,” he laughed helplessly to himself.

“Wait a sec!” he gasped. “Where did those lungs go? The nascent spirit soil here is gradually disappearing, too...”

The daze of understanding Violetgrave’s sword dao had blinded him to everything else in his immediate environment. He was lucid now, but an improbably long amount of time had already passed.

“Eh?” A thought came to him and he went back to hell to find a huge pair of lungs suspended in midair. They respired with a calm indifference that he definitely did not share.

“How’d that get in here?” Lu Yun tilted his head in disbelief.

“Lu Yun!” Standing upon the resurrection layout’s floating peak, Qing Yu called out to him. “What happened just now? Why did the coffin drag these lungs inside?”

She pointed at the Enneawyrm Coffinbearers at the center of hell.

“The coffin did it, eh?” Lu Yun shook his head, dizzy with the implication.

He tried to call upon Violetgrave, only to find the world inside the sword aglow with black sparkles. Just like Empress Myrtlestar and the others inside the Scroll of Shepherding Immortals, she was sealed off by the power of hell.

“Oh.” Blinking, he saw the little nun staring at him.

"I dunno, really." Lu Yun rubbed his forehead gingerly. "You guys can carry on. I won’t stay and bother you."

He ran—er, left—hell as fast as he could. The little nun pouted at Qing Yu, who giggled with a hand over her mouth.

About an hour later, the gaseous sand beneath the Abyss of Divine Burial was no more, but Lu Yun still had no idea how to leave. 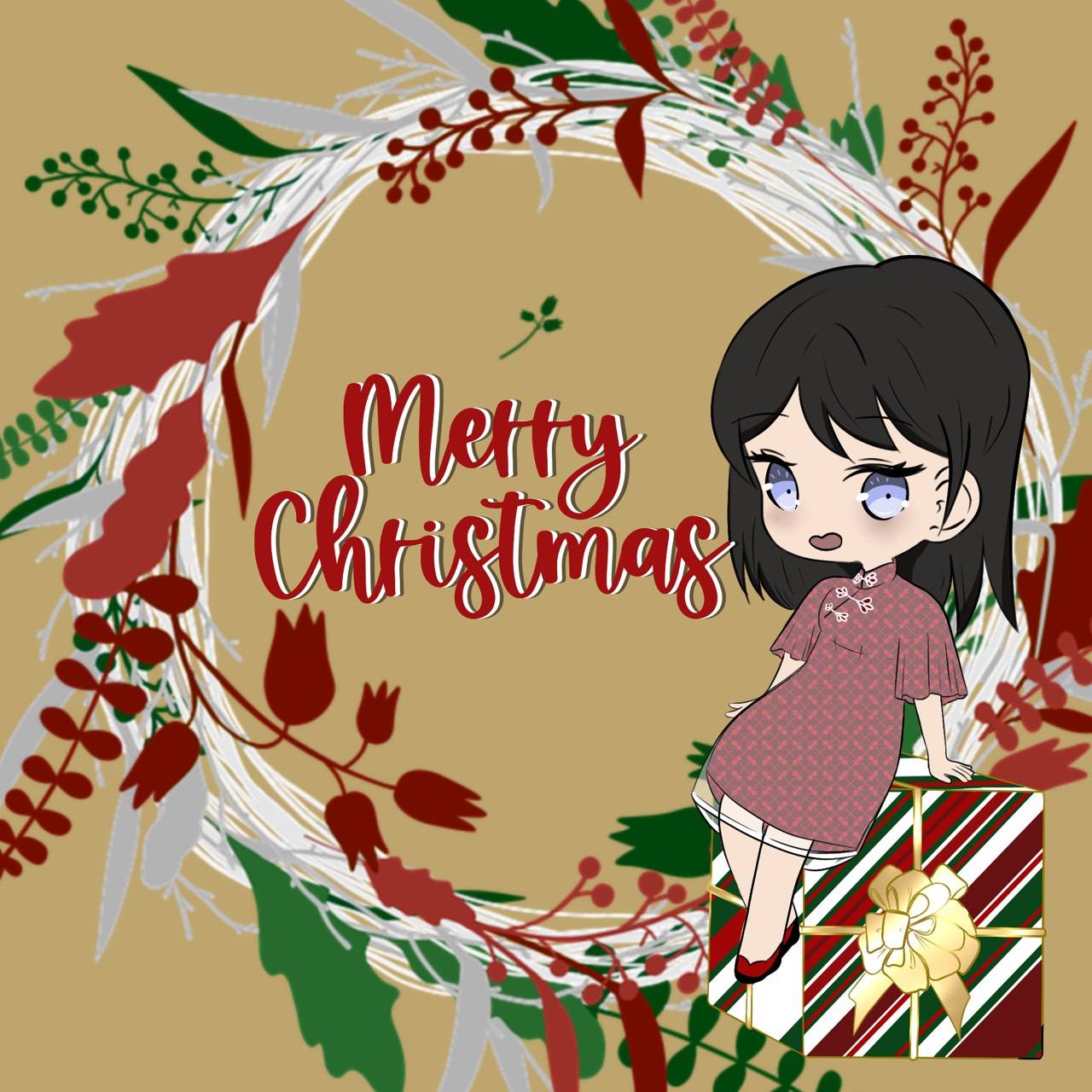 I hope you're having a lovely day with family and loved ones, wherever you are! (This greeting is old, but the graphic is still adorable!)

I think Violetgrave was certainly on the naughty list this year as her present was not at all pleasant this chapter lol.

Emergency day off to restock on chapters!

Hey all, *facepalm*. The end of the year has been more insane than I thought, what with vaccines, weddings, family visiting, and whatnot. As a result... I am incredibly behind and humbled by everyone's patience. Thankfully, le crazy schedules are over and I...