As we've promised for a while now, the new 2022 look for the Wuxiaworld website is finally about to arrive - in approximately 24 hours at 2 PM EST on January 18!  The superb Radish team has really done a tremendous job working with our existing team in helping us redesign and build up the site to a more modern, professional appearance.  We are supremely excited to unveil the fresh new look, so please stay tuned and get hyped!  I particularly love the next dark mode...

Kui had died and become a corpse divine while retaining all of its fighting instincts in life.

The Azure governor had set up a barrier with the power of heaven and earth from the province, amplified by Zhao Changkong with the might of all of Nephrite Major.

The barrier could not only isolate the province and prevent yin spirits from escaping, thus containing the invasion, but it could also defend against outside forces.

However, the zombified kui had managed to attack the celestial emperor and the governor through the light barrier, employing a method of the ancient immortals that was on par with the strength of void-realm immortals today.

The dark azure barrier trembled and broke apart with a roar, followed by an enormous foot a thousand kilometers across stomping down toward the bronze palace.

At its center was Lu Yun and Qing Han. The defense put up by the eight Envoys of Samsara collapsed like a house of sticks beneath its might.

Even with the power of the blood qilin, dragon, and phoenix combined along with Yuying’s immortal fires and Feinie’s Formation Orb were no match for the kui’s one single stomp.

It was too powerful.

Qing Han’s eyes turned silver as she drew upon the power of the Fire Starstone and Big Dipper Starstone; the aura of a dao immortal radiated from her.

A stream of stars streaked out of her hand. Cosmic Skycarver! The connate-grade immortal sword exploded with light and brought a trail of stars down upon that giant foot.

It was as if the sky itself had fallen in. The resulting shockwaves were so powerful that all immortals in the vicinity were knocked off their feet, Zhao Changkong and other dao immortals included.

Qing Han paled, the skin between her thumb and index finger bursting open in bloody glory, but her grip around the Cosmic Skycarver remained tight. The Scroll of Shepherding Immortals turned into a strand of white fabric and circled around her.

Within the scroll, the Azure Dragon King and Empress Myrtlestar worked together to offset the terrifying counterforce—the only reason she was still in one piece.

Lu Yun remained seated, unmoving. Endless heavenly power suddenly gathered around him, protecting his body. His eight envoys had been flung out as well, but they entered hell the moment they flew backwards and immediately returned to Lu Yun to protect him.

Lu Yun had risen to his feet, but his eyes remained closed. His aura slowly became one with the bronze palace beneath his feet.

Qing Han had managed to knock the behemoth kui away, but it made a neat turn in the sky and landed heavily back on the ground. Heavenly lightning crackled, gathering around it and taking shape as a great combat art.

Tremendous thunder and lightning poured down onto Azure Province and the other neighboring provinces, cascading downwards like the ocean. Such was the power of a peak origin dao immortal… from the Primordial Era!

Despair weighed heavily on everyone, even Zhao Changkong had given up on resisting.

Qing Han’s bun had come loose, spilling her long silver hair down past her shoulders. Her robes had turned silver as well. Despite her injuries, she held tightly onto the Cosmic Skycarver.

“Give it up… the corpse divine is too terrifying,” sighed the Azure Dragon King from within the scroll. “Even the empress and I together may not be its match. Lu Yun has his secret weapon, so the zombie kui may not be able to hurt him.”

“I can just go, and I can take Lu Yun with me… but he will blame himself once he regains consciousness,” Qing Han’s voice sounded coolly. “I know he’d rather die than let countless lives suffer because of him.”

Lu Yun wouldn’t blame Qing Han. He would only endlessly blame himself, and for a long time.

Kui had come to Azure Province because Lu Yun had deployed the Yi Wood Cleansing Thunder, which was the Azure Dragon King’s personal technique. Everything that had happened after that was on him.

Lu Yun wasn’t the sort to look for excuses or shift blame on others. He would take full responsibility for this matter. If he were conscious, escape would be the furthest thing on his mind. He would deploy the corpse puppet and attack the zombie kui.

As it were, though, Lu Yun’s consciousness was currently monopolized by heaven and earth, becoming part of it to understand the grand influence of the world.

Empress Myrtlestar remained silent, while the Azure Dragon King sighed. Qing Han made another stab at the sky.

A giant ray of sword light pierced through the air like a shooting star, smashing squarely to Kui. It brayed and shattered the sword energy with powerful lightning.

Qing Han threw up a mouthful of blood as her body slammed into the bronze palace, but at the same time, she’d managed to shatter the kui’s lightning combat art with the attack.

A pained, conflicted grimace overtook Lu Yun’s face as he seemed to sense what had happened. However, the grand influence wasn’t something that one could exit at will.

Dark cyan emerged once more between Qing Han’s brows. That was the poison from her accursed spirit root.

She had to avoid getting hurt, or her accursed spirit root would root even deeper. But now… she’d suffered a serious injury.

There was a sudden explosion of sound in midair as the giant kui was thrown off course and smashed into the ground next to the bronze palace. The very earth of Azure Province trembled violently, toppling half the walls of Azure City a couple thousand kilometers away.

Fiery clouds zoomed through the sky as a pitch-black iron rod landed on the ground with a heavy thud. Wrapped in a fiery cape, Scarlet Ape opened its red eyes and seemed to transcend space with just a few steps from the North Sea, arriving straight in Azure Province.

“Scarlet Ape!” Zhao Changkong stared in shock. The ape had knocked the terrifying kui down to the ground with a singular swing of its staff. The enormous monster spirit who’d boldly established its own sacred land and fractured the monster spirits was more powerful than he had expected.

Scarlet Ape ignored Zhao Changkong and summoned its weapon back.

“I may not like the human race, but I will not allow a dead divine like you to run amok in the world of immortals.” Its head snapped up, followed by its gaze.

Mo Yi’s senior sister hovered above the clouds, showing no willingness to intervene. Next to her, a livid Mo Yi showed clear frustration, but in her eyes was a deep resignation. She’d made her way here back when the yin spirits invaded, but her senior sister had prevented her from doing anything.

Although Mo Yi was powerful, she was extraordinarily wary of her senior sister.

Her senior sister nodded when she saw Scarlet Ape scowling at her.

“According to the rules, I can only move against living beings,” she responded calmly. “Kui has been wreaking havoc in the world of immortals. You’re free to intervene. I won’t stop you.”

Kui had risen to its feet and charged headlong into Scarlet Ape.

“Compared to the human race, I hate the divine race even more!” Scarlet Ape raised its iron rod and swung it at the dead divine’s head. 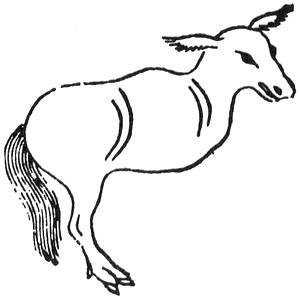 This is a kui as depicted by the Classic of Mountains and Seas. Guys in Discord say there's no way they can picture a cow as a big boss.
From Wiki: The Classic of Mountains and Seas (Chinese: 山海经), also known as Shan Hai Jing,[1] formerly romanized as the Shan-hai Ching,[2] is a Chinese classic text and a compilation of mythic geography[3][4] and beasts. Versions of the text may have existed since as early as the 4th century BC,[5][6] but the present form was not reached until the early Han dynasty a few centuries later.[6] It is largely a fabulous geographical and cultural account of pre-Qin China as well as a collection of Chinese mythology.[citation needed] The book is divided into eighteen sections; it describes over 550 mountains and 300 channels.

Emergency day off to restock on chapters!

Hey all, *facepalm*. The end of the year has been more insane than I thought, what with vaccines, weddings, family visiting, and whatnot. As a result... I am incredibly behind and humbled by everyone's patience. Thankfully, le crazy schedules are over and I...