Donglin E and some of the immortals were originally planning to kill Lu Yun on the spot after the youth broke the terrible formation of death in the tomb. Lu Yun’s weapons of war were powerful, but not powerful enough to fell peak arcane dao immortals. They would be able to stop him if a few of them worked together.

But now, he’d created a formation that could simulate heaven and earth, and the fact that the formation contained the energies of the world hadn’t escaped the attention of those who’d lived for thousands of years.

The power of the land remained in the formation, but if it could be incorporated into an immortal’s body.... Even immortals who hadn’t journeyed through the void realm would be able to become one with the world.

“This… this is ludicrously generous of him. If I had something like this, I would only share it with my confidantes and clan so that we could use it to conquer the world....” Tuoba Jie gaped at Lu Yun, stunned. With Tuoba Jie’s values and perception of the world, Lu Yun’s thoughts seemed absolutely incomprehensible to the celestial emperor.

“If Lu Yun completes the formation integrating heaven and earth, he’ll... become a saint of the world of immortals, won’t he?” murmured Donglin E. He wanted nothing more than to decapitate the boy where he stood. If he were to become a saint, House Donglin would suffer an incredible blow because they were his enemies.

And yet… he couldn’t kill the brat now.

Even Donglin E himself wanted that formation, so that he could incorporate it into his body and gain the heights of the void realm.

The hundred and eight peak peerless immortals had come together to study the Great Formation of Heavenly Spirits and Earthly Demons. It wasn’t actually a formation, but a feng shui layout. But since the immortals of this world didn’t yet understand feng shui layouts, Lu Yun called it a formation.

It took the immortals two full days to deduce the will of the world in the formation. On the third day, Lu Yun made his way to the intersection of the dragon and phoenix nests with his full complement of peerless immortals. The water ghosts and the dragonling immortal ghosts scattered throughout the tomb had all been recalled back to their place of origin, so the only danger they faced was the two-headed zombie.

Situ Zong followed closely behind Lu Yun with an auxiliary cannon on his shoulder, warily scanning his surroundings.

“Young, er, Sect Head!” he worriedly transmitted to Lu Yun. “Is it wise to just share the knowledge about the great formation like this?”

“If I didn’t do that, I wouldn’t be able to leave this place alive. Even if I did, Qing Han would only come under attack instead.” Lu Yun shook his head. “So far, we’ve been mostly focused on the good that comes from restoring the path of cultivation.

“But as we’ve seen from various reactions, repairing the void realm brought about the side effect of eliminating the influence and power of existing immortals. This means a significant dosage of bad karma accompanies the virtuous merit of Qing Han’s actions, and it’s probably only the blessings of the Dao Flower that’ve been protecting him from retribution. This means that once the flower fades out of existence... a tribulation will descend upon him!”

Negative karma and retribution were a result of malice and resentment held by living souls during their lives. If an immortal was killed by a void realm immortal, most of the resulting retribution would concentrate on Qing Han, Wu Tulong, Zi Chen, and Mo Qitian.

Qing Han, especially, would garner most of it, since he was the dao sovereign who’d restored the overall structure of the void realm.

There was no inherent right or wrong in either good or bad karma; all that mattered was one’s perspective and position.

To countless living souls, Qing Han and the youth sovereigns had done them a great service by restoring the path of cultivation, but rendering countless immortals obsolete with the times was also a stunning negative consequence.

That was what Lu Yun wanted to defuse with the Formation of Heavenly Spirits and Earthly Demons. That had always been part of his plan, so he’d never given up on completing it.

He’d shown it now for two reasons: first, the formation could counter the layout of water and fire and the two-headed zombie. Second, Lu Yun and Qing Han wouldn’t be able to leave the tomb alive if they didn’t demonstrate their worth.

Donglin E and the Ling powerhouse would absolutely aim to kill Lu Yun. And as for North Sea Emperor Beigong Xuan—who the hell knew where he’d disappeared to? The only guarantee was that he’d make a move against Lu Yun as well.

The Dusk lord didn’t want to use his trump card here, so he decided to play the formation as his next move.

Lu Yun and Feinie had studied this great formation for a long time, but made no real progress. It was better to announce its existence to the world and invite formation grandmasters from all over to contribute. Perhaps the collective would be able to postulate how to incorporate the formation into one’s body where the two had failed.

“Stop!” Lu Yun suddenly commanded. The peerless immortals walking ahead came to a halt as well.

“Turn back!” Black light flashed through his eyes.

“Since you’ve come here, Lu Yun,” said a chilling voice from the darkness, “Why don’t you stay a while?”

Something enormous slithered out of the darkness and filled the tunnel in the dragon nest to the brim. It was a snake of immeasurable size. The tunnel at the heart of the dragon nest was a couple kilometers wide, yet there was only a slight gap left between the snake’s head and the top of the tunnel.

“This is the true form of a blackwater snake! Is it Beigong Xuan?!” Ling Zhen, the peerless immortal from the Ling Clan, recognized the snake with a single glance.

“Beigong Xuan?” Lu Yun scowled, then paled. He hadn’t expected the missing North Sea emperor to show up here and block their way. “...wait! Who discovered the Ghost Tree first?”

“Beigong Xuan,” said Ling Zhen. “He discovered the Fire Parasol Tree first, then the news somehow got out and reached House Donglin. After that, the Witherdew celestial emperor came and set up the Blithe Entrapment Formation…. Wait!!”

He blanched as a sudden, awful realization dawned on him.

“The blackwater snakes have made this dragon tomb their home!” Lu Yun said as he stared at the giant snake, enunciating every world. “No wonder you stayed here and did nothing to me, even after I raided your base and stole your palace.”

Derision flashed through Beigong Xuan’s black eyes, his black tongue flicking in and out of his mouth.

Lu Yun should’ve realized earlier. Back in the clearing where the Fire Parasol Tree was, most of those he’d kicked out had either doubled back or remained right outside the area, but Beigong Xuan had left with his people.

That in itself was unusual.

However, he hadn’t thought of that detail until Beigong Xuan showed up again in his true form.

“You destroyed Our North Sea court, Lu Yun, and now you dare ruin Our grand plan. You will not make it out of here alive!” As he spoke, Beigong Xuan’s enormous body trembled and emitted pure black light that turned into a tide of black floodwater and swept toward Lu Yun and the peerless immortals.

Situ Zong took a step forward and aimed the cannon at the black waters, blasting out a beam of white light.

Situ Zong staggered back, blood streaking down from the corner of his mouth. The great recoil had left him severely injured.

“Assemble into formation!” Ling Zhen roared with a burst of starlight from his body.

“Formation my ass! Get out of here!” Lu Yun shouted to interrupt Ling Zhen’s suicidal move. “Beigong Xuan’s power comes from himself. The formation won’t do jack. Move!”

Lu Yun grabbed the severely injured Situ Zong and stuck a Size Manipulation Talisman on him, both of them disappearing into dust particles.

“So this is how you entered the monster spirit palace. No wonder no one discovered you.” Beigong Xuan’s dark eyes fixed on the space ahead of him. Lu Yun and Situ Zong had shrunk to the size of dust motes, but he could still see them.

“Die!!” he growled and opened his mouth, biting at the group of peerless immortals.

Emerald fire blossomed in the air, casting the dim tunnel in vibrant green illumination. A stunning figure emerged from thin air, imprinting itself on everyone’s mind. Even Ling Zhen, one who’d grasped the true meaning of the aether dao realm, gazed upon her with admiration.

“We meet again, old snake spirit.” Bathed in Emerald Mistfire, Yuying stared coolly at the enormous snake with a half smile.

The snake flinched like he’d received an electric shock, his eyes fixed on the woman before him.

This immortal fire was the natural bane of the blackwater snakes. Even though it was a mere peerless immortal controlling the fire, horror still pricked at Beigong Xuan. If he killed the peerless immortal, the fire would rage out of control, igniting the dragon nest and even the phoenix nest below it.

With the various layouts set up in the two nests, perhaps they wouldn’t be destroyed by the fire, but Beigong Xuan definitely would. He backed away. A thousand years ago, Yuying had crossed paths with him as a cultivator and driven him away with that fire.

“Go do what you must do, sir. I’ll keep this worm here. If he dares do anything, I’ll detonate the Emerald Mistfire.” Yuying smiled slightly. With a wave of her hand, the emerald fire surged and grew even more intense.

“You’ll die if you do that!” Beigong Xuan said in a trembling voice.

Yuying smiled in lieu of a response.

Lu Yun looked at her with conflicted emotions. How many times had Yuying shown up of her own accord when Lu Yun was in danger? Although he had many great elites as his followers now, she was still the same silent guardian she’d been before, his first Envoy of Samsara.

“Let’s go.” Lu Yun waved a hand and brought the peerless immortals with him as he flew over Beigong Xuan’s head.

The snake was of a mind to stop them, but Yuying had already advanced on him. Beigong Xuan wasn’t afraid of her power, even though she could control the immortal fire. However, if the fire raged out of control, he would surely die here. 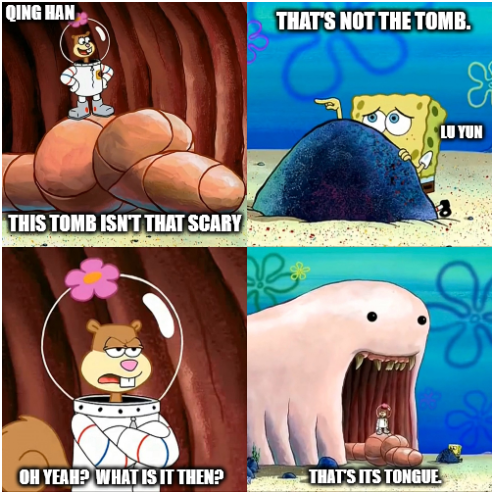 PS. Meme as shared by YellowChopsticks on Discord.