Although the corpse coffin overhead was bloated and decaying after having been immersed in seawater for so long, one could still make out Tinglan’s appearance. Her body was a corpse coffin that spanned fifty kilometers.

“The tombs of yin and yang consist of one real and one fake tomb, and both are real and fake!” murmured Lu Yun as various emotions flickered rapidly over his face. “The poison ghost isn’t Guanqing....”

“Not Guanqing?” Qing Han blurted. “Then who is it?”

“Su Xiaoxiao!” Lu Yun snapped out. “Both tombs are real. One corpse coffin contains Su Xiaoxiao’s body, while the other contains her soul! What an utterly vicious woman. She seized Guanqing’s soul, thus manifesting as an immortal ghost!”

Lu Yun had originally set up a layout to summon Guanqing’s soul, but it was Su Xiaoxiao’s soul in the corpse coffin that had answered the call. She’d taken possession of Guanqing and turned into an immortal ghost, utterly scattering the maid. Tinglan and Guanqing had voluntarily committed suicide to turn into loyal spirit guards, yet Su Xiaoxiao had been so heartless as to take possession of one of them and destroy all traces of her!

Lu Yun had harbored some suspicions at first. Even though Guanqing had turned into a poison immortal ghost, she was so much stronger than Tinglan. They were in completely different leagues! After getting a good look at the tombs’ layout, he realized that he must have summoned Su Xiaoxiao herself.

“No matter what, I need Su Xiaoxiao as my envoy!” Lu Yun tightened his jaw. Regardless of what kind of a person she’d been in life, she’d be his to command after becoming his envoy.

“That’s strange. I met Doctor Poison Su Xiaoxiao a few times when I reached the perfect heights of my dao, but I never heard about her having any maids.” Cangyin approached Tinglan and remarked hesitantly, “From my memories, she was an impish character with a flare for dashing heroism. She saved countless lives in her day, and other than an admirer of hers, there was no one else who followed her.”

As a heavyweight in the ancient times, Cangyin had occasionally crossed paths with Su Xiaoxiao. When Su Xiaoxiao had first risen to fame, Cangyin had been only a princess of the water qilins, rather than a powerhouse in her own right.

“I’d be the first to say that she wouldn’t slaughter all lives across eighteen major worlds.” Cangyin shook her head. “When she died, I mourned her for a long time.” She levelled Tinglan with an unsmiling gaze. “Are you really her maid? Did you really commit suicide to guard her tomb as a loyal spirit?”

As she spoke, two balls of ghostly fire flared in her eyes and shone brightly at Tinglan.

“I am.” Tinglan said through clenched teeth, her face turning increasingly translucent.

“If you say so.” Cangyin nodded slightly. Without Lu Yun’s prompting, she told him everything she knew about Su Xiaoxiao through the Tome of Life and Death.

Lu Yun nodded without registering a change in emotion, casting a meaningful look at Tinglan through the Gates of the Abyss. This body of water was a special space outside the ancient tomb. Only the two giant corpse coffins remained of Su Xiaoxiao’s tomb; coffins and tomb had become one without any division.

“Let’s go back!” he declared with fatalistic determination.

“Go back?!” Terror flashed through the little fox’s blue eyes.

“I can send you back to the Kunpeng Palace with a transportation formation disk.” Lu Yun raked a withering look over the little fox in Qing Han’s arms. For some reason, he really wanted to drag the animal out of Qing Han’s arms.

“No!” The little fox popped her head out of Qing Han’s shirt and shook it hurriedly. “Ugly thing will protect me. I’m very safe!”

“Alright. Let’s go.” The Deaf Prince nodded solemnly. He was now wearing a full, glittering set of Celestial Exorcism Armor and wielded a coin longsword that warded off evil with greater strength than that of the armor.

Under the protection of the golden light, the Deaf Prince and the others reentered the corpse coffin through Guanqing’s inky mouth. Yin energy still flooded it as human-headed octopi wandered around aimlessly, expelling energy every once in a while and dying the seawater black.

Suddenly, they all jerked in the same direction. They’d sensed the fear radiating from the little fox, which attracted the monsters like it had before.

The octopi whipped toward them and readied themselves to form a Great Formation of Corpse Refinement, but Lu Yun wouldn’t allow it.

Blinding light radiated from the Sugato Sword as he made eighteen slashes in a row. He almost cut the immediate watery region in half, forcing back countless octopi. They hadn’t had the chance to gather yin energy, and without that, they couldn’t threaten Lu Yun.

Qing Han and the Deaf Prince made their moves as well, throwing more octopi back.

"A dragon sleeps in mountains coiled, those deathly cliffs with mysteries roiled.

Grasping the overall layout of the tombs, Lu Yun activated the Dragonsearch Invocation. The indicators of the luopan rotated swiftly, instantly pointing to the extreme yin of the corpse coffin. Most extreme yin returned to yang and created a thriving land of pure yang, which was perfect for burial. The luopan concluded that was where Su Xiaoxiao’s body was.

Throwing reservation out of the window, Lu Yun unleashed dark hellfire through the water, scaring away the octopi that’d been gathering for another charge, along with other nebulous figures in the dark.

Terrible screams rang out the moment they approached the land of extreme yin, piercing through the waters and forming a churning wall of sound waves.

“Open!” It was Qing Han’s turn to make his move. What was terrifying wasn’t the sound itself, but the shockwaves it elicited. The disguised girl manifested a sword and cleaved through the powerful shockwaves, the counterforce shattering his supreme rank sword.

“Someone’s fighting in there!” Wariness colored Qing Han’s expression. The corpse coffin was completely saturated after being buried in seawater for five thousand years. Still, some parts of the coffin, such as the hole before them, remained untouched. That was where the point of extreme yin was.

“No, not someone, but something!” Lu Yun’s face blanched, his eyes fixed on the luopan in his hand. “Something entered the tomb and triggered a mutation of Su Xiaoxiao’s body. Whatever’s in there is fighting her.” 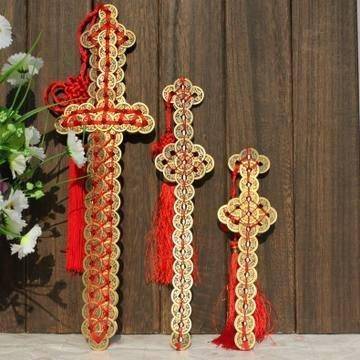 Seems like Su Xiaoxiao was punished by being stripped of her soul, but did the shamanic race have something to do with her to give her a corpse coffin burial?

Btw, these are examples of the coin longsword that the Deaf Prince is wielding. It's a traditional sword that exorcists might use, and ah, really is made of coins.