Chapter 294: Flesh and Blood as the Brush, Soul as the Ink

Not only was Myriad Returns Market in shambles, but the floating island at the center of Levitating Island had sunk into the inner sea. The six princes hovered in the air, highly pleased with themselves.

“I’ve finally avenged you, little sister!” Pain flashed through Jing Dichen’s blue eyes. Her little sister had once found a rare treasure when venturing around the North Sea, but someone from Levitating Island had set their eyes on it and killed her for it.

With the skydragon tomb opening, all of the dao immortals in the North Sea had convened in the capital’s waters, including those normally stationed on Levitating Island. It was the perfect opportunity for the six princes to stir up trouble and destroy the island.

“No.” Beicang Qiong, third son of the Beicang Clan, shook his head slightly. “This is far from enough! It was Beigong Chonglou, first prince of the North Sea court, who killed your sister. We must kill that bastard and really hurt the court to truly avenge her!”

His shoulders were double that of an average man’s shoulder span and his impressive frame athletically powerful, which lent further weight to his proclamations.

Jing Dichen nodded slightly while the other four agreed in silence. They were here for revenge!

“The market has been destroyed, but Levitating Island remains, as do the pirates of the North Sea....”

In the end, Fang Feixing fled with his tail between his legs. The scions of the Unsullied Sea, Unmeant Sea, South Sea, and Lin Clan called upon immortals of Levitating Island to enter the North Sea and go after the pirates in the nearby waters, while the Deaf Prince and Beicang Qiong sought out Lu Yun.

Lu Yun and his companions had long returned to Kunpeng Palace. The palace was situated on the peninsula by the inner sea, but the waves caused by the sunken floating island hadn’t damaged it at all. With the six heirs running rampant through the locale, even he had trouble keeping himself safe. He had no choice but to return to the palace with Qing Han and Xing Mou, but not before he had Beigong Yu knock out Canghai Chengkong and transported him to hell.

Meanwhile, the lord of the Panorama Pavilion escorted their members to another city on Levitating Island.

Lu Yun had sensed something unusual about the Deaf Prince’s behavior early on. No one would randomly fling about crystals everywhere on the path to Myriad Returns Market, no matter how rich they were. The prince was obviously looking to throw a wrench into the market’s operations.

What gratified Lu Yun was that the Deaf Prince hadn’t used his idol’s argument with Fang Feixing as a pretext to start trouble. Only when Fang Feixing had come looking for them did the prince and his friends erupt in fury and destroy the floating island.

That alone told Lu Yun that the Deaf Prince was a worthy ally.

Levitating Island was a treasure trove that collected all of the riches from the waters around it. They’d exploited passing immortals without mercy in the past. Anyone who dared resist would be raided and killed by the North Sea pirates.

With the floating island destroyed and Levitating Island’s influence greatly undermined, all it would take for the pirates to be exterminated was for someone to lead the charge.

“Where… am I?” Within the resurrection layout, the only patch of living energy in hell, Canghai Chengkong trembled in a prone position on the ground. This place was simply too terrifying.

Eerie winds seemed to howl right into one’s soul, and a sinister chill pervaded the air. Countless terrifying humanoid creatures trained in uniform precision and matching armor stood nearby. What terrified him most were the two giant coffins laying at the center of this sunless realm. One was carried by nine dragons, and the other was enveloped by the body of a nine-headed phoenix.

“Isn’t that... the Scaled-Dragon King!” Canghai Chengkong couldn’t believe his eyes. “And his hundred thousand soldiers…. Didn’t Lu Yun kill him with formations? Why is he here now?”

Canghai Chengkong stared dumbly at the army undergoing training exercises next to the two giant coffins. With the Kunpeng King Beigong Yu dead, the Scaled-Dragon King had become the foremost king of the North Sea. Though Canghai Chengkong was a sword immortal, he wasn’t the king’s match at all. But never in his wildest dreams, did he expect to see the dead scaled-dragon king in such a strange world!

There was a sudden weight on his shoulder. He turned around and screamed with horror, “The Kunpeng King! Beigong Yu! How are you still alive?!”

He jumped up with another shriek and stared fearfully at Beigong Yu, who scoffed and stepped aside with his head lowered.

“There aren’t many pure sword immortals in the world,” sounded a mild voice. “So it’d be a shame to kill you.”

A young man in white, looking about seventeen years of age, emerged from behind Beigong Yu with a warm smile and appreciative gaze.

“Lu Yun… you...” Canghai Chengkong’s face clouded over. He was clever enough to figure out what was going on.

“However,” Lu Yun muttered to himself rather than respond to Canghai Chengkong, “I will also be a sword immortal once I ascend to immortality. Someone like you isn’t qualified to be one of my envoys.”

“With your flesh and blood as brush and your soul as ink, write your name on the first page of this book.” Lu Yun brought out the Tome of Life and Death as he spoke.

“I....” Canghai Chengkong took several steps backward. Although he’d recovered some mobility, he was still at Lu Yun’s mercy. He could sense the great power in Lu Yun; it seemed as if the human could control everything in this world with a single flicker of thought.

“Write your name down or die,” Lu Yun said calmly.

Beigong Yu threw Canghai Chengkong a look of enviness. “Dammit, this brat is weaker than me, but he’s so lucky that he can have his name in the book.”

With his name written in the Tome of Life and Death, the sword immortal would become something like Ge Long. He wouldn’t be an envoy, possessing the power of the Tome, but he would be unkillable under the book’s protection.

Infernum like Beigong Yu, on the other hand, wouldn’t be able to come back to life once dead. Ge Long’s name had been written on the tome first, though, even earlier than Yuying’s. Therefore, he would be more powerful than the others who came after him. Canghai Chengkong would never be his match, even after writing his name down.

“I’ll do it!” Canghai Chengkong yielded to preserve his life. Crimson light flashed through his fingertip, his nascent spirit and soul manipulated by a strange force.

Canghai Chengkong! appeared in bloody strokes on the book.

His heart swelled with pride and awe as he finally understood who Lu Yun truly was. The overlord of life and death!

“This servant swears to die in your service, master!” He got on his knees and kowtowed to Lu Yun.

Canghai Chengkong gave Beigong Yu a self-satisfied smile. By this point, he knew why Beigong Yu and Scaled-Dragon King were here. 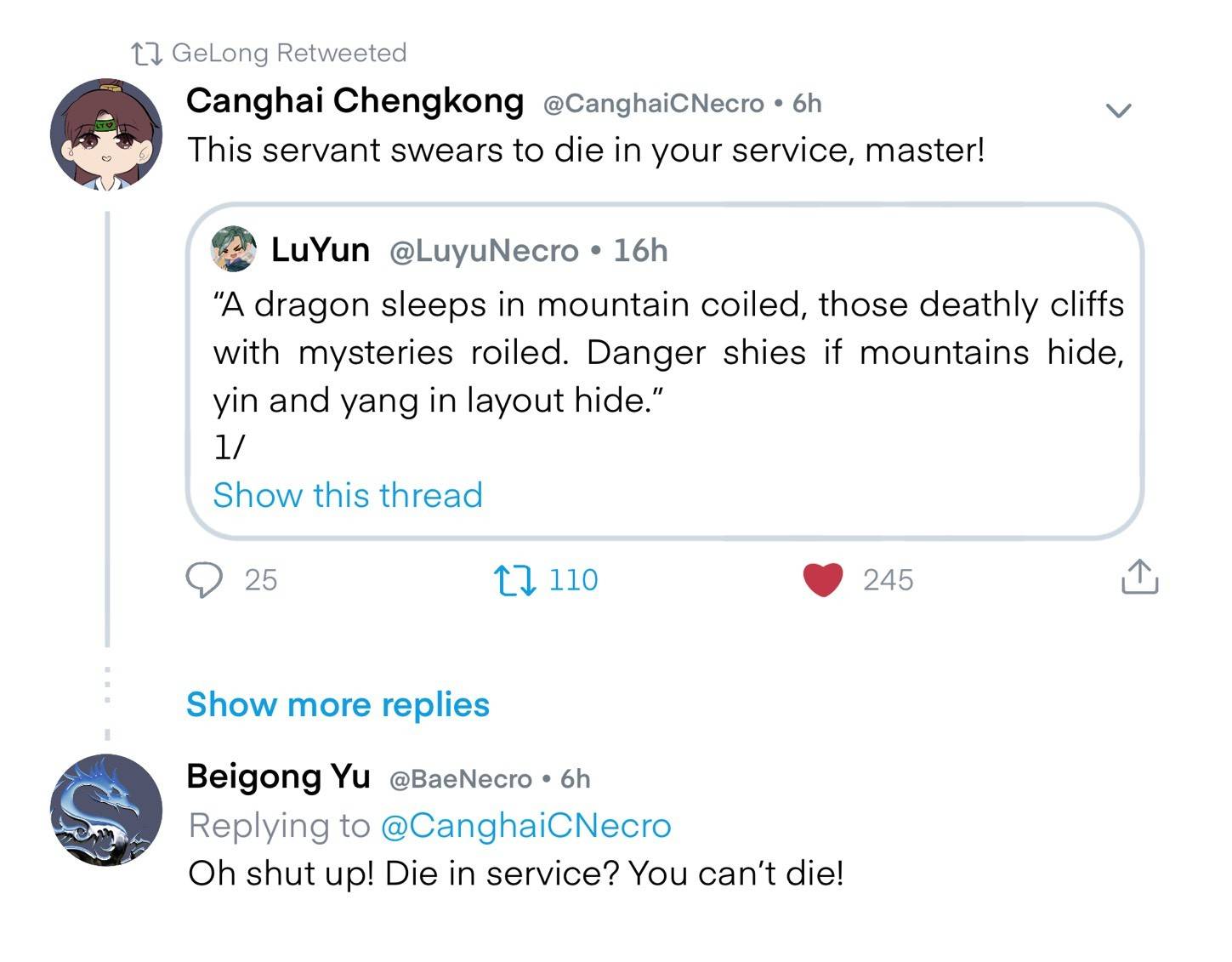 Yooo we finally have an answer to what Ge Long is! Looks like he's a hybrid of envoy and Infernum -- something like undying cannon fodder?

And lol at Beigong Yu being so annoyed. I had my artist Yuuko flesh out this inspiration, more art on Patreon!