Dusk Province’s restriction had killed a golden immortal with the same ease as one would squash a stink bug. Blood drained from the crowd’s faces. How could an august immortal—that noble breed of immortals—be so easily dispatched?

They’d heard about the restriction simply glaring the House Dongling patriarch to death, but hearsay wasn't the same as witnessing with their own eyes.

Despite the restriction’s departure, no one dared move an inch. Sweeping his gaze across the collected immortals, Lu Yun shook his head before taking his leave, bloodcorpse in tow.

In the air, Feng Wujiang was driven to the point of delirium. Uncle Heng was dead, and now so was Feng Yin. Shrieks of rage echoing in the air, he thoroughly unleashed the Great Tempest Formation. Frightening winds beat upon the Black Tortoise image, and the Tempest Bird tore at its opponent.

However, Yuchi Hanxing stood firm. She raised her lance, pointing it at the sky. The Black Tortoise image responded with rippling tides, the skies for thousands of kilometers around becoming its personal lake. In the water’s heart, the tortoise whipped up wave after inexorable wave.

Unstoppable swells washed away soldiers from the Great Tempest Formation, weakening the bird in the air by scattering the formation.

“How… how… impossible!” Feng Wujiang was completely unhinged. He roared into the air, futilely attempting to keep his men in the formation beneath his feet, but the enemy’s offensive was relentless.

At this moment, the million Dusk Phalanx soldiers thought with uniform clarity, hearts beat with absolute harmony, and breathed with perfect unity.

“Huoooh—” The line between image and reality blurred. The tortoise’s body expanded tenfold, nearly blotting out the sun. In comparison, the Tempest Bird was the size of a mere sparrow. The humongous reptile strode between the waves, catching up to the fleeing bird in a single stride. It slammed forward a heavy foreclaw.

A loud explosion rang through the firmament. The Tempest Bird’s body shattered into its component soldiers before falling to earth, many of them instantly incapacitated. Feng Wujiang was left alone in midair.

“The Tempest Battalion has lost!” Zhu Yu and Yue Cheng were aghast. “This shouldn’t have happened… the Dusk Phalanx may have seen a real Black Tortoise, but its soldiers shouldn’t have reached a communion with its spirit so quickly… why?”

Zhu Yu paled with the error of her projections. She’d thought the Dusk Phalanx would only be able to win a pyrrhic victory, if any victory at all. It was more likely that the battle would end in a draw after fearsome casualties.

“Say, that tortoise image just now was a little strange.” Yue Cheng frowned. “The Heavenly Formation seemed to briefly ascend beyond just a military formation. Those soldiers—for just a moment—turned into a real Black Tortoise.”

Most military formations in the world of immortals were modeled after connate divine beasts, or spirits with an inborn power. Compared to regular divine beasts or spirits, connate beasts and spirits were bestowed a natural grasp of nature’s dao. Emulating them granted the soldiers a similar form of power. The Heavenly Formation of the Black Tortoise and the Great Tempest Formation were both examples of this.

However, the images projected by the formations weren’t truly the beasts in the flesh. They borrowed from the forces of nature, but couldn’t truly command them. Yet the Heavenly Formation had just now unleashed the Black Tortoise’s domain. The final swipe had appeared particularly real in its viciousness.

The two looked at each other in confusion.

“The township! Gather the soldiers back together! Defend Cloudwater!” Zhu Yu snapped to fearful attention.

His body hurtled toward Lu Yun in a reckless charge.

“Out of my way!” Feng Wujiang howled. The image of a Tempest Bird appeared behind him, sending the bloodcorpse flying with a single wingbeat.

Man and image overlapped, pouncing down in a deadly swoop upon the youth in the middle of the town.

Although the Great Tempest Formation had been destroyed by the Black Tortoise image, the fowl’s residual strength still remained in Feng Wujiang. Despite being sealed, the general had a third of the formation’s power behind him. An arcane immortal bloodcorpse was no match for that.

“Ah!” Yuchi Hanxing’s pretty eyes widened. “No wonder he lost so easily. He’s been biding his time and had reserved part of the formation’s energy for himself!”

She hadn’t actually taken any lives in the attack just now, opting to merely immobilize the enemy’s soldiers. If she’d dared slaughter friendly forces, the Nephrite court would be the first to press charges.

Feng Wujiang knew her hands were tied and had been able to hold back a part of the formation’s energy because of it. His objective wasn't to defeat the Heavenly Formation, but to kill Lu Yun! So what if the Great Tempest Formation had lost? He would still be the final winner as long as the governor died!

“Die!” Yuchi Hanxing brandished her lance, deploying the Dusk Phalanx once more and sending the Great Tortoise image hurtling down with Feng Wujiang. At peak aura, the formation’s momentum sent the town trembling. Cracks and fissures appeared in the ground around Cloudwater.

“Back, ” Lu Yun called out quietly as he stood his ground. “Don’t destroy Cloudwater Township.”

His words were slow and measured, but he managed to deliver all of them before Feng Wujiang’s arrival. There was a note of resolution in them that could not be questioned.

Yuchi Hanxing saw the light in her governor’s eyes and bid the Heavenly Formation grind to a halt.

The gigantic shadow of a tower emerged from Lu Yun’s body as an endless barrage of bladed intent flared up to the sky. He held a miniature tower, about a meter tall, in his palm. The Sugato Sword.

“The ancient lord’s sword tower is mine now!” Feng Wujiang boomed, releasing all of the energy inside him at once. The shadow of the Sugato Sword crumbled under the intensity of his martial might, since Lu Yun couldn’t make full use of the treasure just yet.

“Battle formations of the immortal world are indeed something to be reckoned with!” Blood trickled out of Lu Yun’s mouth. He squinted, raising his eyes toward the pouncing Feng Wujiang. “But right now, you’re all alone! Open up!” A weighty rumble signified the opening of a black gate behind him.

The sound of a ringing bell echoed between heaven and earth.

Only a couple meters from him, Feng Wujiang shuddered horribly. The ghostly Tempest Bird over his body disintegrated in the next instant, and blood streamed from his orifices. 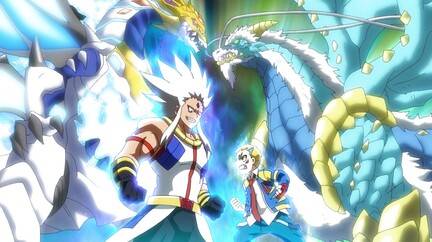 The way we've seen these two formations battle actually really remind me of Beyblade -- anyone else watch that in their childhood? Basically, two opponents send spinning tops at each other and whichever one stops spinning first loses. However, each top has a spirit/animal soul that's summoned throughout the course of the battle and the images fight each other as well. Sometimes they're overlaid on top of their owners, which really felt like our fight here lol.