Chen Xiao’s brow creased faintly. Both the tombs of the North Sea dragons and the Ancient Tree of Life in the Endless Desert were things of legend. Gone with the wind in the ashes of the two supreme factions, the Skydragon Pearl and fruit of the ancient tree were long buried in the graveyard of history. Though not at the level of a Fusang Purewood, the two items had still been among the greatest treasures of the immortal world.

“I can find the dragon tombs!”  Lu Yun resolutely declared, not shying away from Chen Xiao’s gaze in the least. “With the Fusang Purewood now in our hands, we can ease Qing Han’s pain. But to thoroughly cleanse the poisons from his body, we need to gather all three items.”

“Alright.” Chen Xiao nodded gently. “Leave the Ancient Tree of Life to me; you head to the North Sea and secure the Skydragon Pearl. But that’s not urgent at the moment. Let’s alleviate Little Han’s condition first.”

He and Qing Buyi took up positions outside in case someone else were to interrupt a second time. As for Empress Myrtlestar, she’d concealed herself with an unknown art and made her presence impossible to sense unless someone were to step directly into the room.

Lu Yun himself didn’t know how to use the Fusang Purewood to help his friend, but the empress did.

“So the sword in your hand is Violetgrave!” She cast a shocked look at Lu Yun when she reappeared.

The empress nodded. “‘Tis a sword that also appeared in my era. It was wielded by a matchless genius, but mentioned in documents even more ancient. This weapon is indeed capable of burying my corpse.”

“Is it a sword, or a mausoleum?” Lu Yun asked in astonishment. The empress hailed from a distant past that predated the present by at least a million years.

“I am not certain either, but I once looked into this item. Civilizations from many different eras are buried inside its sword aura. In all probability, it also includes our ruined world from a hundred thousand years ago,” the empress softly voiced her thoughts.

To Lu Yun, her explanation seemed straight out of One Thousand and One Nights. Civilizations from countless eras, all buried inside a ninth-rank immortal-grade sword?

It was a little too hard to swallow. It would’ve been easier to accept if it was another existence like the Scroll of Shepherding Immortals or the Enneawyrm Coffinbearers, but a ninth-rank weapon?

That being said, the mausoleum inside its sword aura was still rather hazy, and he couldn’t yet clearly discern the identity of those buried inside.

“What about hell? Have you ever heard of it?” he asked, suddenly struck by an idea.

The empress blinked, then shook her head. “I know of the Firmament Ruins, a place that imprisons an unparalleled immortal dynasty’s greatest felons. But I have never heard of this... hell.”

So not even Empress Myrtlestar knew about the netherworld! For a supreme powerhouse from a million years ago to never have heard of it, all tales of hell must’ve disappeared from the immortal world before even her time.

It was so unthinkable that Lu Yun wondered if something had erased all traces of hell from the collective consciousness. However, the existence buried in the Enneawyrm Coffinbearers had uttered the word “hell”, which implied it was even more ancient than Empress Myrtlestar!

“No worries, let’s handle Qing Han’s current poison first,” he quickly changed the subject and firmly pushed these thoughts to the back of his mind.

“It is not yet time.” Empress Myrtlestar shook her head. “The connate elemental essences on him are doing their utmost to withstand the poisons. We must wait for one side to overpower the other before we can proceed.”

“You mean that… the connate elemental essences can also resist the poisons in his body?” Lu Yun stared, wide-eyed.

“Indeed.” The empress inclined her head. “The divine sunfire on the Fusang Purewood is also a type of connate fire, hence why it can… eh!” Before she could finish, Lu Yun extended his hand and clutched at the southern sky.

A ball of extremely pure fire essence landed between his fingers.

“Is that enough?” He looked at the empress.

She stared at the ball of elemental energy, flabbergasted. Such power should’ve been the exclusive domain of the four sacred beasts, or the legendary divine spirits of the four cardinal directions!

Yet a cultivator who’d stepped into the nascent spirit realm not too long ago had summoned a ball of fire essence with incredible ease! Didn’t that violate every principle of the universe?

No, in the here and now, the universe itself seemed within his grasp!

“Not enough?” With a slight frown, Lu Yun clutched southward again and grabbed an even bigger ball of essence.

“Stop, that shall suffice!” Empress Myrtlestar waved her hand to completely seal off the room with a flash of violet light.

“Is he starting?” Drinking wine somewhere in the manor, Chen Xiao and Qing Buyi’s hands stilled as they looked toward the room.

“What powerful strength. How unexpected that not even the two of us can see what’s happening inside! The kid does indeed have a few tricks up his sleeve,” Qing Buyi tutted.

“Why does it feel similar to an energy I’ve also sensed from Little Yu?” Chen Xiao tilted his head to the side. “It’s probably from something else the kid gave her. Is he really unaware that Qing Han and Qing Yu are one and the same?”

“After you left yesterday, he told me that Qing Han occupies a greater place in his heart than Qing Yu. He doesn’t even know if he really likes Little Yu.” Qing Buyi happily sipped a mouthful of wine and wobbled his head. “The kid isn’t wrong. He’s yet to see her real self and doesn’t even know who Little Yu is, so any talk of genuine sentiment would be pure gibberish! He likes Little Yu because Qing Han is Little Yu. His feelings for Qing Han are true, so his feelings for Little Yu are also genuine.”

“From now on, never ever expose this power of yours in front of outsiders!” Empress Myrtlestar’s expression was extremely grave. “The power of the five connate elements is not the domain of cultivators or immortals! This is an innate ability belonging to the four sacred beasts and the divine spirits of the four cardinal directions! You shall never know a moment of respite if the descendants of the cardinal spirits were to learn of your existence.”

It hadn’t been long since the empress’ obsession had fused with the fragment of her soul, so she didn’t have the time to spare to constantly keep an eye on the outside world. Only now did she realize where the elemental energy surrounding Qing Han had originated.

Lu Yun froze, then nodded. “Got it. Is this much fire essence enough?”

“It is.” The empress nodded gently. “Leave the rest to me. You should rest and prepare for the ancient legacy.

“The lord who fell in Dusk Province is named ‘Lord Sugato’, the greatest lord serving under Emperor Polaris. There’s a treasure inside his Sword Pagoda called the Philosopher’s Jewel. It would be immensely useful in restoring my physical body, so I hope you can help me secure it.”

Empress Myrtlestar had been buried in the province a hundred thousand years ago, ample time for her obsession to gain its own self-awareness. Given that, it was no surprise that she knew of everything that had transpired in Dusk Province and was aware of the ancient lord’s identity.

“You can use Lord Sugato’s legacy to buy hearts and sell favors, but you ought to keep the Sword Pagoda itself. It’s a peerless immortal-grade item called the Sugato Sword, and it once destroyed a connate treasure. It is worthy of being labeled ‘ultimate of all’. Your Violetgrave is much too uncanny, and devoured all of its previous owners. In comparison, the Sugato Sword is more suitable as your personal weapon.” 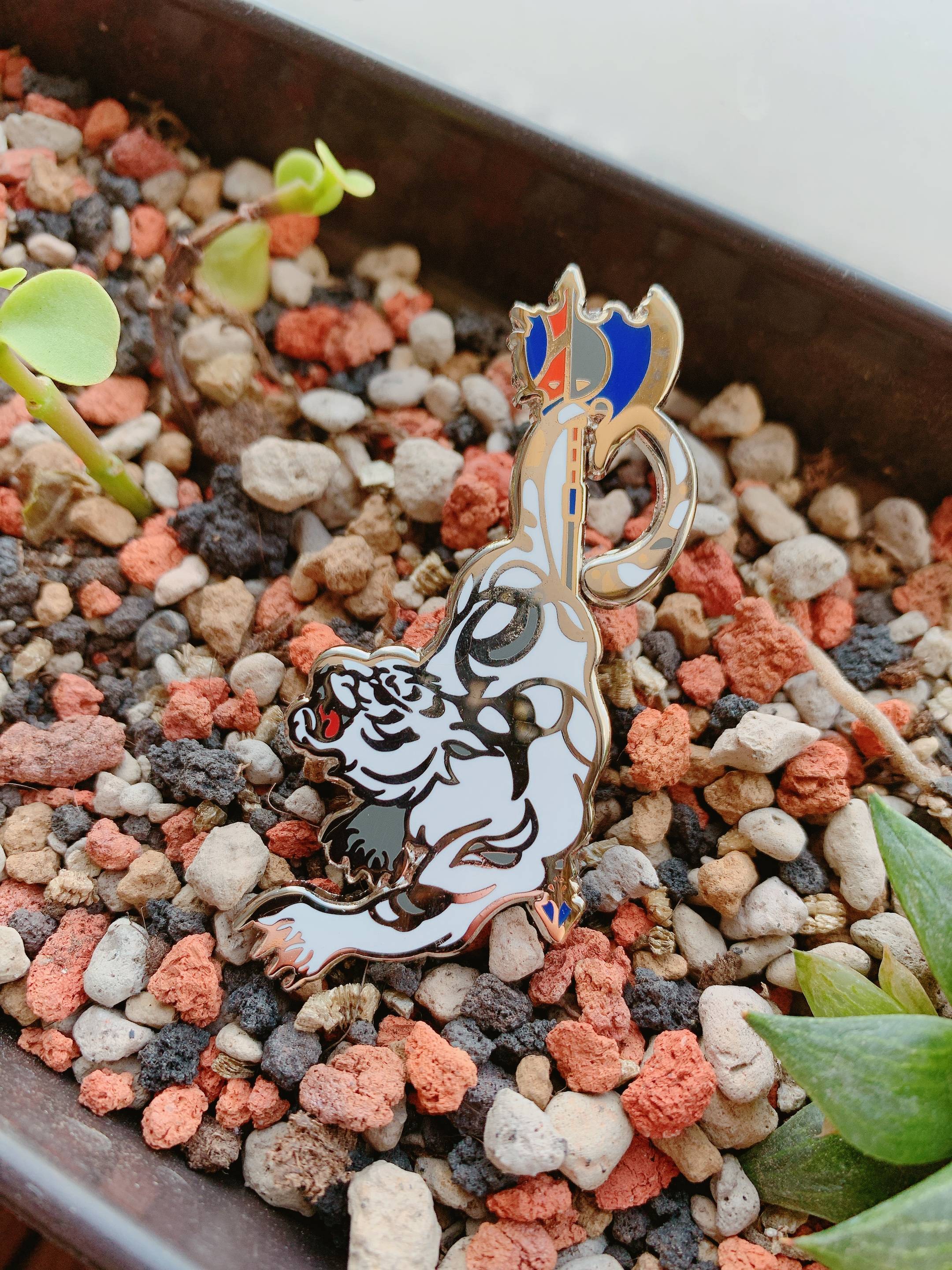 *whistles* A master conspiracy that erased all knowledge of hell from the collective consciousness? Violetgrave eating all of its previous owners? Whew!

Last call for xianxia tiger pins! 7 bubble teas on Ko-Fi or Patreon brings this home to you~