The Tome of Life and Death was a marvelous treasure that, in the very beginning, Lu Yun didn’t even wield a hundred millionth of its capabilities.

It was only after the book transformed into his nascent spirit that Lu Yun’s understanding of the treasure took a step forward. This was how he was able to use it to separate the ladder—a treasure that rivaled the Bell of Chaos—into thirty-six copies and dissemble them among his thirty-six clones.

The thirty-six golden armored warriors perfectly imitated his form, presence, and life ripples. Clones created by the Tome of Life and Death, they all vanished in the next second, entering the world of the chaos creatures through different directions.

“Honestly, you just needed to make one additional you.” The little fox stared wordlessly at where the thirty-six Lu Yun’s had stood.

“I wouldn’t need to make so many clones if I could also replicate you. But I don’t have the ability to perfectly copy you at the moment, so I can only use this to confuse them.” Lu Yun didn’t know whether the giver of the ladder was friend or foe, but he was certain that the entity could sense the ladder’s existence. However, he likely didn’t know that Lu Yun could undo the ladder accepting him as its owner.

The little fox blushed with embarrassment when she heard this. She’d become a burden once again. In fact, all she was good for right now was to drag Lu Yun down.

“Don’t think too much.” Lu Yun reached out to tousle the little fox’s head, but awkwardly retracted his hand when he realized she was in human shape. “All you need to do is to focus on cultivating and try to break through to creator realm. If you can do that in a short period of time, you’d be able to safeguard the world of immortals when we return, to say nothing of being able to hold your own in the chaos.”

Creators were called thus because they could create something out of nothing and craft all life itself. They were stunning personages even within the chaos.

Tushan had experienced reincarnation, traveled through space and time, and been enlightened by Hongjun. All of this convinced Lu Yun that Fuxi and the others had made the little fox part of their plans—what with how much care and effort they’d poured into her. She absolutely had the potential to become a creator during their journey to the chaos.

The pristine currents here were much purer and higher quality than the immortal qi in the world of immortals. Though there was no immortal dao or great daos here, their absence also meant limitless possibility.

Weaker life forms required the guidance of a great dao to walk the immortal dao, but true experts needed to break free of that mold and detach themselves from the immortal dao. One had to at least reach the creator realm first for this to happen.

Though Lu Yun and the little fox weren’t creators, they were also no ordinary life forms. They absolutely had the right to cultivate in the second realm.

The two of them approached an enormous tree, drilled a hole in its trunk, and made themselves at home. It was an ordinary tree with no ripples of thought or tangible strength to it, just ordinary flora like the most mundane plant in the world of immortals.

However, it was so mammoth that its crown spanned several hundred thousand kilometers. It was bigger than Dusk Province! But here, it was only a regular tree in the chaos.

“Little Yu can cultivate here as well.” The little fox swallowed hard as she looked at a pot of snake stew bubbling over a campfire.

“The disturbance from Little Yu breaking through will be too great. She’ll attract a lot of hostile attention if she comes and might even die here,” Lu Yun sighed. “She’s the dao sovereign of the immortal dao and can’t hide the presence of immortal dao on her even when she’s a chaos dragon. It’s fine enough when she stays on the outskirts, but if she comes to a place where chaos creatures live… the risk of her exposing herself is too high.”

Though Qing Yu’s formula dao couldn’t forecast her own future, she could overlook the entire situation and see the warnings ahead.

“I want to learn formula dao too.” The little fox brought out a jade bowl and served herself a bowl of snake stew.

“Don’t you already know it?” Lu Yun grinned. The little fox had learned everything there was to learn about formula dao, but her mastery of it paled far in comparison to Lu Yun and Qing Yu’s.

As the rankings currently stood, Qing Yu was first beneath the heavens when it came to formula dao, second was Lu Yun, and third was Meng Wang.

Though the former immortal emperor was still in a Hell Flower and yet to fully reform his true spirit, his thoughts and consciousness were complete. Since he had nothing else better to spend his days on, he turned his thoughts to cultivating formula dao and deriving the future of the multiverse.

Meng Wang was the resident sage of the Dao Academy, whereas the little fox’s grasp of formula dao stopped at deriving and breaking cultivation methods and combat arts. She couldn’t speculate on destiny or the future.

“What…?” Before Lu Yun could react, the little fox suddenly sprang into her true form as a chaos dragon and howled a piercing dragon croon.

After reaching chaos realm, the cultivation ranks between beings of the realms and the chaos were the same. Prior to that, the empyrean and great emperors realms of the worlds were different to that of the chaos creatures.

However, the little fox’s sudden breakthrough caught Lu Yun off guard. The disturbance was too great, chaos realm was a local titan among the chaos creatures!

Indeed, countless domineering consciousnesses swept the void when she broke through.

“Sacred tribe, chaos dragon!” a ponderous thought tinged with fear rose in space. “Why would chaos dragons come to such a bleak and forsaken place like this?!”

Chaos dragons were by nature ruthless and violent, the most bloodthirsty race among the sacred clan. When their ire was roused, they left not a single blade of grass unturned within a hundred million radius. Everything was destroyed and exterminated.

Hence, all of the chaos creatures here only wished for the juvenile chaos dragon to hurry up and weather its tribulation so it would leave.

Chaos creatures needed to endure a tribulation when they broke through to chaos realm—specifically the chaos tribulation, the likes of which had once appeared in Witherdew Major. Black tribulation clouds swiftly gathered in the area when the little fox broke through and black lightning howled through the heavy clouds.

The little fox blinked with confusion, taken aback. She hadn’t endured any tribulations when she’d broken through to chaos realm the very first time. 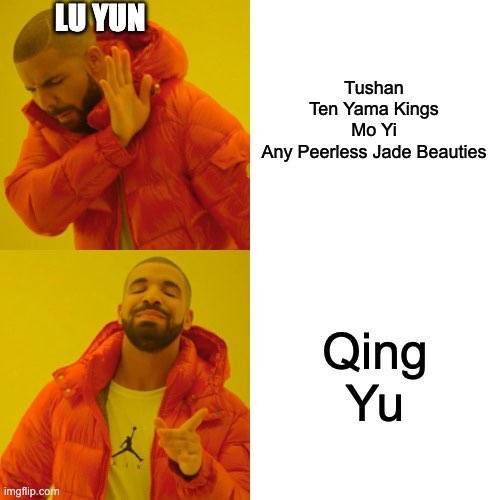 By spiderman on Discord