In the center of the banquet hall stood a circular dance floor spanning fifty meters wide. Members of the Star Luo delegation climbed up it and declared the start of the party.

The moment music started playing, a couple entered the hall and a spotlight descended upon them. It drew everyone’s eyes.

A fairy in silver and white, so beautiful one would fear that with a blink and she would disappear, merely a figment of a dream. This was the girl who had just walked into the hall with her partner. Her black hair gently brushed past her shoulders. She carried herself in a delicate manner, and although not particularly pretty, she had a noble and graceful air.

The music stilled. Upon closer inspection, her hands were wrapped in a pair of silver evening gloves, subtle patterns running along their length. Her dress stopped short of her knees and revealed a pair of slender, fair legs, seemingly cut from marble. Her high heels, also silver, sparkled like crystal, and as she walked forward the tapping filled the hall, counting down to a splendid occasion.

Escorting her was a handsome young man. He stood tall and straight, his figure slender yet muscular, with perfectly broad shoulders. His jet black hair was combed back and fell in supple waves. A pearl-white shirt stood out against the black of his trousers, and a black bow tie complemented his purple tuxedo. He cut a dashing figure, despite the hint of immaturity left on his face. If the girl next to him was the full moon over the starry sea, then he was the radiant golden sun.

Murmurs broke out among the bystanders, praising the beautiful couple. The spotlights were manually controlled and had coincidentally landed on the two, but it was so fitting that the operators couldn’t bear to readjust them. In that moment, they were the prince and princess of the banquet.

The couple was precisely Tang Wulin and Gu Yue.

Standing atop the platform at the back of the hall, Sima Lanxiao had a clear view of the two as they had walked in. He was certain that they were both from Douluo since he was familiar with the faces of the Star Luo delegation. It was essential for a diplomat to have a good memory.

“It looks like we have another strong candidate for our prizes tonight. Welcome to the banquet! May I ask which part of Douluo you are from?”

Tang Wulin found his outfit uncomfortably tight and restrictive. In his everyday life, he wore whatever was comfortable to blacksmith and cultivate. Yet despite how restrictive he found the tuxedo, he could feel himself standing taller in it.

Gu Yue had locked arms with him as if only natural when they entered the hall. As the spotlight had landed on them, Tang Wulin was taken by surprise. But not a stranger to surprises, he quickly recovered and answered Sima Lanxiao. “We’re from Shrek Academy.” His voice was calm and pleasant, loud enough that everyone in the hall could hear it.

The spotlight finally left Tang Wulin and Gu Yue. As the music grew louder, people made their way to the dance floor. Meanwhile, the waiter staff carried a myriad of gourmet dishes into the hall.

“Wow! Captain, you can’t do this!” Xu Xiaoyan said, bouncing toward Tang Wulin and Gu Yue.

Tang Wulin tilted his head, brow raised. “Why can’t I do what?”

Xu Xiaoyan giggled. “If you dress so handsomely, I’m afraid I’ll fall in love with you!”

Xu Xiaoyan pulled on Gu Yue’s free arm. “Big Sis Yue! Is this your work? I refuse to believe Captain can dress himself up like this! Aren’t you afraid of other girls stealing him away though? When I looked around earlier, I saw a whole bunch of young ladies staring at him like a meal!”

Tang Wulin looked at her helplessly. They were at the age where they couldn’t help but think about members of the opposite sex. Even Tang Wulin, level-headed as he was, had noticed far more about girls recently. If he wasn’t so busy with cultivating, he might have more interest in dating like the others. But he restrained himself and refused to allow any distractions into his life. For the sake of finding his missing parents, he had to become as strong and fast as possible.

The other students of Shrek Academy walked over to greet Tang Wulin and Gu Yue.

Yue Zhengyu wore a wry smile on his face as he compared himself with Tang Wulin. It was undoubtedly his defeat. Tang Wulin was simply too handsome to contend with, and even a couple centimeters taller. There was no helping with either of these things. “Tang Wulin, you’re gonna lose all your friends at this rate, you know?” Yue Zhengyu said, pouting.

Tang Wulin rolled his eyes. “Oh? And you have a lot of friends?”

Yue Zhengyu’s clicked his tongue as he stared at Tang Wulin’s fake smile. Then he snorted. “Fine! I’ll leave your ass alone!” Just as Yue Zhengyu turned around, he met several familiar faces. The students from the Imperial Star Luo Academy. Except this time, their numbers seemed to have multiplied. Every one of them stared at Yue Zhengyu with eyes full of disdain.

This guy sure knows how to stir up trouble. Tang Wulin chuckled. In a few quick steps, he was in front of Yue Zhengyu to face the students of the other academy. “Hello. Let me introduce myself formally. I’m the captain of the students from Shrek Academy on this exchange trip. My name is Tang Wulin,” he said, extending his right hand. This was a formal meeting between students of both delegations, so it was Tang Wulin’s responsibility as captain of the team to make first contact.

As the two shook hands, Tang Wulin felt immense pressure clamping down on his hand. If he yelped in front of everyone at this banquet, he would undoubtedly lose face for himself and Shrek Academy. So, Tang Wulin returned the favor. A radiant smile blossomed on his face as he said, “I’m happy to meet you all. I hope we learn a lot from each other in the future.”

Luo Qinghan’s complexion paled instantly. It felt as if his hand had been sucked into a meat grinder.

Tang Wulin continued shaking hands quickly, forcing the bones of Luo Qinghan’s hand to grind against each other with each jerking motion. The pain was excruciating, but Luo Qinghan knew better than to cry out. He could only grit his teeth and endure. Beads of sweat formed on his forehead, running down his pale skin.

The students of Shrek Academy were all watching with grins on their faces. They could tell exactly what was going on between Tang Wulin and Luo Qinghan, and they knew their captain had the upper hand! There was no one in all of Shrek Academy’s outer court that dared challenge Tang Wulin to a contest of raw, physical strength. Such an endeavor would simply be foolish.

After a couple more shakes, Tang Wulin finally let go of Luo Qinghan’s hand and gave him a curt nod, brushing right past him.

Before Tang Wulin could move further, two students of the Imperial Star Luo academy rushed forward and stopped him. Pretending as if he didn’t see them, Tang Wulin walked right through, knocking them away with his shoulders. The rest of his teammates followed right behind him in the path he created.

Luo Qinghan didn’t say anything to stop the Shrek Academy students. He just ducked his head down and stuck his right hand into his pocket, desperately trying to control its shaking. Shit that hurts. That brat is strong!

This should be the pic of them in this chapter. Some details may be different in the picture such as Tang Wulin's bow tie and suit jacket being purple. And Gu Yue's blue floral stuff. 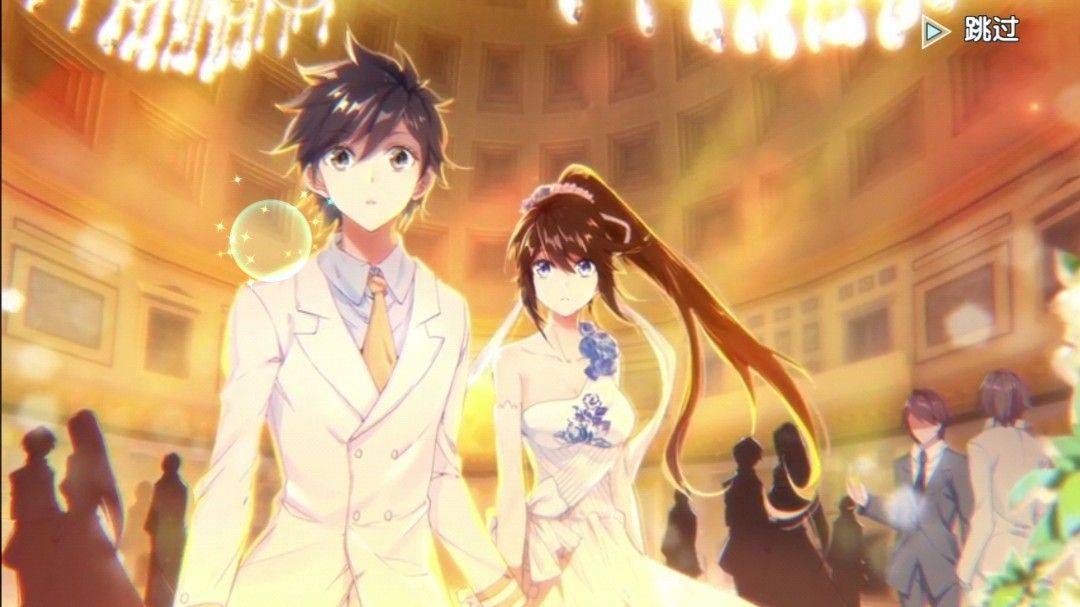