Chapter 552 - The Disappearance of the Tyrant Dragon

Chapter 552 - The Disappearance of the Tyrant Dragon

Shit! I’m at my limit! Alarm bells ringing in his head, Tang Wulin could no longer sustain Golden Dragon Shocks the Heavens. His only choice was to press the emergency escape button. But to Tang Wulin’s horror, his body was kept frozen in place by a bizarre energy. The culprit none other than the Tyrant Dragon.

This energy connected with and provoked strange changes to his blood essence. Through this connection Tang Wulin was like a puppet, unable to move as according to will as he floated in the air. Every avenue of escaping the spirit ascension platform gone with the wind.

Damn it! What do I do? Tang Wulin could not even cry out for help. All he could do was watch in fear as the Tyrant Dragon’s maw gaped, closing in on him by the second. Shit! If you’re going to kill me, at least swallow me whole! He was consumed by unadulterated terror. His palms went damp as his mind spun nightmarish threads, flashing images of those razor-sharp teeth descending, ripping him apart into bright, bloody shreds.

Then those jaws were right upon him.

But pain did not come. Instead, something warm and wet brushed against his body, leaving him damp and sticky. Following that sensation, he slipped into free-fall. His eyes snapped open. Tang Wulin could move again. Heart pounding, he hurriedly channeled soul power through his body to mitigate the impact of landing.

As he fell, he stole a glance at the Tyrant Dragon and saw its tongue retreating back into its mouth. Confusion flickered across Tang Wulin’s face, then settled into surprised understanding. It wasn’t trying to eat me, but lick me? Tang Wulin didn’t know whether to laugh or cry. Either way, he was relieved to escape death.

The Tyrant Dragon lowered its head to catch him in his landing, which occured right at the spot of its golden scale. Tang Wulin touched it, and the instant he did, the Tyrant Dragon raised its head toward the sky. A deafening roar escaped from that impressive maw, shaking the forest far and wide. Somehow, Tang Wulin understood that this was a cry of joy.

The golden aura seeping out of Tang Wulin slowly extended. It creeped toward the Tyrant Dragon, enveloping the soul beast in its embrace, starting from the single golden scale down to the tail.

Tang Wulin’s blood essence bubbled with excitement, the remaining fourteen seals quivering. A burst of energy came forth from the depths of his blood essence, its very origin. Sensing this change, the Tyrant Dragon lowered itself until it was prone on the ground.

Tang Wulin stood up and jumped down from the Tyrant Dragon’s head. With his feet firmly planted on the ground once more, he turned to face the colossal dragon bathed in gold. To his shock, the Tyrant Dragon closed its eyes, its figure fading. In that moment, the two understood each other. The dragon’s golden scale dispersed into a golden mist toward him.

As the golden mist fell upon him, Tang Wulin felt a powerful energy entering his body. It grew stronger with each passing moment. He felt as if he were the sea in which all rivers terminated.

Tang Wulin had been too preoccupied to notice, but the moment he had landed on the Tyrant Dragon, Gu Yue broke into a mad dash toward him. She stopped a short distance away, a difficult expression on her face. “How could I have forgotten?” she muttered to herself. “Tyrant Dragons are the king of land dragons because they possess the blood of the Golden Dragon King! It’s not pure, but it’s still powerful.”

The golden mist lingered around Tang Wulin for a while before fusing with his body. He could once more see the world around him. And he gasped when the giant body of the Tyrant Dragon was nowhere to be found. The only evidence that it had not been a dream were the enormous tracks left in the ground.

After getting over his surprise, Tang Wulin realized something different about his body. It felt fuller than usual, but no matter how he tried to examine himself, he couldn’t figure out what had changed. The remaining fourteen seals were intact, and neither his soul power nor blood essence showed any differences. Even when he summoned his bluesilver grass and soul rings, all seemed just as before. Just what was that golden mist that entered me? What did it do to me?

Although almost everything in the spirit ascension platform was illusory, and there was no evident change in his body, he was absolutely certain that he had gained something from that mist.  He just couldn’t figure out what it was.

Well, at least the Tyrant Dragon is gone. Tang Wulin let out a long sigh, his heart finally relaxing.

The crisis he had just faced once more reaffirmed his lack of strength. Before the truly strong, he was no more than an ant. Damn. But I bet even Teacher Wu would have had to run from that Tyrant Dragon! It was ridiculously huge!

Tang Wulin searched for Gu Yue and quickly found her a short distance away looking back at him. He broke into a jog in her direction. “Were you watching all of that? Did you see how the Tyrant Dragon disappeared? You got any idea what happened? I feel like something has changed about me, but I have no idea what.”

Gu Yue shook her head, a pensive look on her face. “From what I saw, it looked like the Tyrant Dragon was overjoyed to fuse with you. Like one of those contracts between soul masters and spirit souls back when the Spirit Pagoda was first established. Back then, it was a mutual pact between both parties instead of how one-sided it is nowadays.”

A mysterious smile formed on Gu Yue’s lips. “Then I don’t know. Anyway, I’m just glad we didn’t turn into its food. You think we should take a moment to rest now?”

Tang Wulin immediately dropped to the ground on his behind. “Of course we should. You have no idea how scared I was just now. That thing was gigantic! My ears are still ringing from its point-blank roar.” He chuckled, falling gently on his back. “I definitely need a bit to recover from that. Anyway, I doubt any soul beast will come near after all that roaring from earlier. We should be fine for a while.”

In a flash, he was sitting back up again. “Right! Your Spirit Pagoda’s management has got some issues! What the hell was a thing like that doing in the intermediate section—”

The space around him and Gu Yue began to warp. They jumped back on their feet, surprised, alert, and alarmed. But their vision faded as quick as their reaction had been.

Moments later, Tang Wulin and Gu Yue awoke, shocked to find themselves out of the spirit ascension platform and back in their capsules.

When the doors to their capsules opened, Gu Yue immediately crawled out. Tang Wulin sluggishly sat up. Adding to his shock was the sight of a crowd of people surrounding them led by Gu Yue’s teacher. The Heavenly Phoenix Douluo and the vice-chairman of the Spirit Pagoda, Leng Yaozhu.

The crowd immediately focused on Tang Wulin the moment he sat up. Leng Yaozhu stepped forward from the rest and studied the two young soul masters, eyes bright. “You don’t have to be nervous. There was just an unexpected issue with the spirit ascension platform so we’re investigating right now. Well then, you two come with me.”

What a good boy. 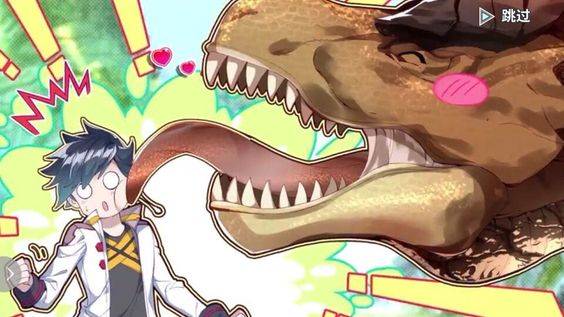