All who remained on the working student dormitory grounds were Yuanen Yehui and Xie Xie, the former in her room and the latter still loitering in the courtyard.

Xie Xie stared holes at her door, biting his lip and clenching his fist. Wulin is right. There’s a chance if I try, but none if I sit around moping! He steeled his resolve, walked to the door, and knocked.

“Yuanen, I washed your clothes for you. They’re hanging to dry in the courtyard. You can go grab them later.” Caution peppered his voice.

Not a sound was heard from within the room. Several moments later, Xie Xie spoke again. “Yuanen, Captain went to get some food. We’re the only ones left here now. Can I talk to you? I want to be honest.”

Xie Xie winced at first, but immediately settled with slapping his cheeks twice. Determination glinted in his eyes. “I’ll just say it from here then. The first time I saw you naked, I was stunned. I didn’t see anything clearly, and before I knew it I was beaten into a pulp by you. But if there was one thing I realized at that moment, it was that you were a girl. So I decided to help you clean the place every day. Sweep the floor, wash the windows, dust things off. I didn’t know what else I could do for you.”

Inside her room, Yuanen Yehui’s rage burned hotter as Xie Xie began his monologue. The longer she listened, however, the more she surrendered to an unseen force, standing up from her bed and staring at the door in a daze.

“Then helping you clean the dorm just became a habit for me. I felt uneasy whenever I couldn’t tidy up. Honestly, I don’t regret what happened. If not, I wouldn’t have known that you’re a girl. You’re so beautiful. Being ignorant of that would be the greatest mistake of my life, and I’ll gladly receive any punishment to avoid it.

“Later on, I came to understand that my habit wasn’t tied to cleaning. It was just an excuse to see you every day. My heart ached on the days I couldn’t. It’s for that same reason I returned early to campus.” He sighed. “Originally, the plan was to show you guys how much stronger I got when I came back after cultivating earnestly at home. But I just couldn’t focus. I could never bring my mind off Shrek. I wanted to return as soon as possible the entire time. I’ve only realized the truth recently. I didn’t miss Shrek. I missed you.

“I’m sorry! I’m sorry for peeping on you again! But I really didn’t do it on purpose. And I really only got a glimpse. Although I did get a clearer look than the time before, it was still only a glimpse.”

Yuanen Yehui couldn’t bear it anymore. Her fury bubbled out of her throat, “Go to hell!”

Xie Xie coughed, then continued, “I shouldn’t have seen it, but as a man, I feel responsible. So let me take responsibility for you. Yuanen, please marry me. Be my wife, won’t you?”

Silence descended. Xie Xie’s heart raced, so much that he could hear it pounding in his ears. He swallowed. “Yuanen, I think we’re quite a match while you’re in your normal form. I think I’m pretty handsome too. We’re still young though, so we can just get engaged for now. I can get approval from my family at this moment, and then we can get married for real after we graduate. I promise to take responsibility and take care of you.”

At last, Xie Xie saw a beautiful smile on her lips. Even with her eyes red and swollen, there was no denying the beauty of her smile.

“I’ll help you on your way out.” Her expression suddenly changed. Gone was her smile, in its place a grim mask. Her body swelled with muscle as she grabbed him by the lapels of his shirt. Flexing every muscle in her body to draw up maximum power, she threw him into the air.

Xie Xie streaked through the skies like a shooting star out of the working student dormitory grounds, his screams trailing his shrinking form.

With that, Yuanen Yehui shrank back to her normal size. She glanced at the clothes Xie Xie washed, then took them down and returned to her room. She slammed the door shut behind her.

A towering tree in Spirit Ice Plaza shook. Xie Xie fell through its branches, fortunate enough to have them cushion his fall. He landed face first, shooting up to his feet a moment later.

“Holy shit that scared me,” he exclaimed, gasping for breath. He scratched his head awkwardly. He didn’t know if it was right for him to like Yuanen Yehui or not. Such a violent girl.

“Whoa! A flying man! Interesting!” someone said joyfully in the distance.

Xie Xie looked up to see a middle-aged man smiling at him, his build as average as they came. He wore his hair short, and his small eyes shone with warmth. A toothy grin that wasn’t quite whole, a front tooth chipped in half. He swept the floor with a broom, giving the appearance of a neighborly uncle.

The man’s face froze. “Uncle? Am I that old already? Boy, you were really quick on your feet just now. Are you an agility-type?”

Xie Xie chuckled. “Uncle, you really do deserve to be Shrek’s janitor. You can even tell I’m an agility-type!”

A mischievous smile played across the man’s face. “You shouldn’t underestimate people. Boy, how about we make a bet?”

“I’ll stand right here. If you can snatch this broom from me within ten minutes, you win. Otherwise, it’s my win.”

Xie Xie shook his head. “No thanks. There’s no point.”

“I’ll bet you one hundred contribution points! Even us janitors get points,” the man said.

Xie Xie smirked. “Uncle, now you’re just gifting me a hundred points. You work a hard job, so I’ll still have to say no.”

The man’s face soured. “Huh? I wanted to win some points from you for breakfast. I didn’t think you wouldn’t even have the balls to accept such a small bet.”

Xie Xie felt his chest tighten. It was an easy bet anyway. He simply had to snatch the broom from the man’s hands while the man stood still. “Fine. I’ll take you on!”

Xie Xie’s figure blurred the moment the words left his mouth. He reached the man in an instant, his hand stretching for the broom. After spending so much time with Tang Wulin, he had learned a few cunning tricks.

“Whoa!” the man cried out, letting go of the broom. But this act caused Xie Xie’s hand to miss the handle.

The broom fell onto the man’s toes. Xie Xie stepped in and stooped low to grab it.

The man turned, the broom sticking to his foot as if glued on. Xie Xie missed again.

“Huh?” Xie Xie’s eyes went wide. He realized now that this was no ordinary man. His competitive spirit was stoked. His figure blurred again and his speed doubled, his daggers materializing in his hands.

The man kicked the broom back into his grasp. He faced Xie Xie with a huge grin. “Come on. The clock is ticking.”

Xie Xie remained silent. Using Ghost Shadow Perplexing Step, he surrounded the man with his afterimages. It was near impossible pick out the real Xie Xie.

However, the broom came alive in the man’s hands. It jumped, danced, and twisted around, avoiding Xie Xie’s grasp each time, no matter the angle of attack. Through it all the man didn’t move a single step, his lower body practically motionless!

Thus marks the end of volume 6.

Volume 7 up next with Yue Zhengyu on the cover! 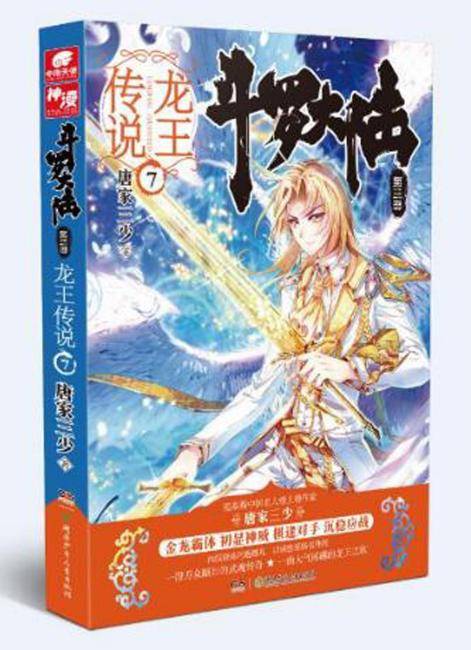