Mo Lan screamed. Her body jerked as it tried to resist the pain, agitating the wound on her shoulder. Bright red blood splattered the ground with every movement. Then the green flame fully submerged into her head and dyed it green.

After taking the backlash of his failed spiritual attack, Tang Wulin could do nothing but lay there on the ground and watch, helpless to save Mo Lan.

Tang Wulin had overcome countless challenges since entering Shrek Academy, growing stronger step by step. After defeating the Imperial Sun Moon Academy in their team battle, he finally felt like he found his place. But now, facing this sinister man, he realized just how insignificant he still was. He had barely started to walk on the path to power and didn’t understand what true strength was. He couldn’t even see the end to this man’s power.

Even so, he would stake it all to save Mo Lan!

Tang Wulin bit down on the tip of his tongue hard enough to draw blood in order to clear his mind of the piercing headache. Gathering his willpower, he forced himself to stand up. He stomped down. The train shuddered, and he shot forward like a bullet. His blood essence flowed in reverse and draconic aura reached its peak in an instant. His golden dragon claw appeared an instant later and he unleashed Golden Dragon Shocks the Heavens, concentrating all of his might into this one attack.

From the spiritual backlash he just received, Tang Wulin knew that he was no match for this man. He was utterly insignificant before this monster. All Tang Wulin could hope for was that a surprise attack would be effective.

But he still had to avoid accidentally harming Mo Lan in his attack!

The man flicked his gaze to Tang Wulin, dark humor in his eyes. He swung Mo Lan in Tang Wulin’s direction bringing her between him and Tang Wulin.

Tang Wulin had never faced someone as devilish as this man before, but with all of his combat experience, he was prepared for this.

Mid-run, Tang Wulin angled himself to the side with Ghost Shadow Perplexing Step, grabbed a seat with his left hand and used it as an anchor point to fling himself toward the wall. Then he kicked off the wall, altering his trajectory to go around Mo Lan and attack the man from the side.

Under so much pressure, Tang Wulin’s skill in the Ghost Shadow Perplexing Step reached the next level.

It was too late for Tang Wulin to back out now, so he pressed onward. The man suddenly noticed that there was something weird about Tang Wulin. His eyes shone with a golden light!

Tang Wulin let out a draconic roar. He slashed at the man, releasing five dark gold beams of light. With the might of Golden Dragon Shocks the Heavens supporting it, this Golden Dragon Dreadclaw became Tang Wulin’s most powerful attack!

Knowing the gap in strength between them, Tang Wulin hadn’t hesitated to unleash this attack. This was his only chance, and his only hope of dealing any damage to his enemy.

With how cramped the train carriage was, there was no way for Tang Wulin to avoid the bone spikes. However, the same held true for the man too. He couldn’t avoid Tang Wulin’s attack either.

With a shout, a gray force barrier burst around the man.

Mo Lan was sent flying away into the next carriage, and threw Tang Wulin into a wall. The metal wall caved in, forming a small crater with Tang Wulin embedded in the center.

Tang Wulin struggled to open his eyes. He could vaguely make out five gashes in the man’s barrier.

The man let out an inhuman howl, akin to a terrifying beast.

A determined light flashed in Tang Wulin’s eyes. He shot out a strand of bluesilver grass to wrap around a seat near the carriage Mo Lan landed in and pulled himself over. Without any hesitation, he brandished his Golden Dragon Dreadclaw again and slashed apart the walls, disconnecting her carriage from the one he and the man were in.

The two halves of the carriage drifted away from each other leaving a giant hole. Using his bluesilver grass, Tang Wulin maneuvered onto the roof of the carriage.

When the gray barrier disappeared, five lines of blood trickled out of the man’s chest, the wounds bone-deep. Realizing that a mere three-ringed kid had managed to harm him, his eyes went red with rage. He chased after Tang Wulin to the roof of the carriage, leaving after images behind.

Tang Wulin brandished his claw once more, cutting off the other end of carriages. Only he and the gray-robed man remained.

A chilling wind brushed past Tang Wulin’s back. He stiffened, then immediately threw himself to the side. Not daring to look back, he threw out Goldsong and using it as a spring to launch him out into the wilderness.

Tang Wulin’s number one priority was the safety of the passengers. He knew that the ashen-robed man’s target was him, then Mo Lan. With Mo Lan already wounded, all he could do was draw the man as far away as he could from her. He was confident that the government had already been alerted and had dispatched a force to take out the evil soul master. All he had to do now was survive until they arrived.

The man let out a sinister laugh as he watched Tang Wulin run away. He spread his arms wide, then jumped off the train to chase after Tang Wulin. He was swift as a bird, instantly catching up.

Starlight wrapped around Tang Wulin’s claw. An instant later, his gauntlet appeared on his arm. Tang Wulin gathered his remaining his soul power and channeled it into his claw, unleashing another dreadclaw attack at the man. At the same time, countless strands of bluesilver grass shot out of his body in different directions and he used Goldsong to alter his trajectory.

But before he could escape, green flames shot out and burned every single strand of grass, including the one Goldsong fused with. Goldsong felt as if it was electrocuted.

Tang Wulin felt Goldsong disappear in a blaze of flame. Pain assailed his heart with its disappearance, leaving him paralyzed. He fell to the ground. A second later, the man landed on top of him.

The gap in strength was simply too great. The ashen-robed man had at least six rings and a powerful martial soul.

Tang Wulin lost consciousness momentarily, but when he roused seconds later, he looked down to see five bone spikes penetrating his chest. The golden scales on his chest were nothing before the sharp spikes.

It’s over. Am I going to die? The fear of death surged into Tang Wulin’s heart. A rueful smile crossed his lips.

Tang Wulin had never expected to die like this. Mom, Dad, I can’t go save you anymore. Na’er, I can’t search for you anymore. I can’t become a great soul master anymore.

Countless regrets ran through his mind as he stared death in the face.

“Kid, I won’t let you die so easily,” the man said grimly. He had been careful to avoid piercing any fatal organs like the heart and arteries.

The man hoisted Tang Wulin up by the spike, widening Tang Wulin’s wounds. Blood gushed out. “Now, let me hear you scream!” He stared at Tang Wulin with gleeful madness in his eyes.

Raising his other hand, a moss green flame appeared in his palm and he thrust it into Tang Wulin’s forehead.

Cold! It’s too cold! His very spirit felt like it was freezing, then smashed with a sledgehammer while his insides were being torn apart and sewn back together over and over. He couldn’t even let out a single scream.

Spoil at your own risk. 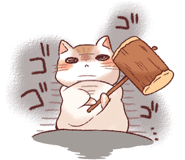