“I’m paying my home a visit first. Then I’m going to train in the Spirit Pagoda for a bit. We only have one month off after all,” Gu Yue said.

“I’m going home too,” Xu Xiaoyan chimed in. “I live in the same city as Xie Xie.”

“Same,” said Yue Zhengyu, shrugging. “I need to go home to get my next spirit soul for my fourth ring.”

“I’m staying,” Ye Xinglan said. “Though, I’m not going to be on campus much. I’ll be training my sword in seclusion until Gu Yue returns to help me get another spirit soul.”

“If you need our help with the spirit tower, just call,” Tang Wulin said.

Ye Xinglan shook her head. “My spirit soul requirements are a bit specific. I won’t be doing the tower assault. I need to buy mine instead.”

“Okay.” Tang Wulin didn’t pry any further. Everyone had their secrets.

Xu Lizhi chuckled. “Guess it’s my turn. Well, I’m going to visit my family. I’ve been feeling a bit homesick. Right, Xinglan.” He turned to face her. “When do you plan on going to the Spirit Pagoda? I want to go too!”

“In about half a month,” she answered.

Tang Wulin shook his head with a smile at those two, turning to Yuanen Yehui. “What about you? Are you going anywhere?”

“I don’t have any family to visit so I’m going to stay and cultivate.” Yuanen Yehui cut a lonesome figure.

Tang Wulin sighed. “I don’t have any family either, so I’ll be staying on campus as well. I might go on a trip sometime during the vacation, but for now it looks like it’ll just be the two of us here.”

Gu Yue glanced at Yuanen Yehui, then at Tang Wulin. She hesitated, lips opening and closing, but in the end she remained silent.

“It looks like everyone has their own plans, so we’ll be parting ways for a while. But don’t lose sight of our goal, guys. Xinglan will have her fourth soul ring soon. That’s why once the next semester rolls in, we can finally start churning out some battle armor. Let’s all do our best.”

Somewhere along the line, the eight working students had formed a tight little circle. Tang Wulin reached forward with his hand, placing it in the center of the ring. Without missing a beat, Gu Yue placed her hand flat on top. The rest joined in a moment later, sharing smiles and a look of trust. Following a shared nod, they cheered, “Let’s do our best!”

And with that, the members of Tang Wulin’s trusted friends filtered out of the room. All except one.

“Escort me to the gates,” Gu Yue said to Tang Wulin.

Tang Wulin folded his hands behind his head and relaxed. He enjoyed the freedom between semesters. As soon as they stepped out of the dormitory, a chill breeze swept by, touseling their hair. The trek toward the gates carried a certain sense of gloom, empty of students, most of who had left for vacation. That it was peaceful was undeniable however, and the two walked on in silence.

It wasn’t until Gu Yue had stepped through the gate and walked a few paces more did she flip around, breaking the quiet between them. “You can go back now. I’ll see you next semester,” she said, waving him goodbye.

Not noticing anything out of the ordinary, Tang Wulin flashed a radiant smile. “See ya!”

Gu Yue bit her lip. Her hand twitched in the air before she waved stiffly once more. It fell to her side. A black limousine pulled up and she got in without saying another word.

As the limousine drove off, Tang Wulin’s heart thumped in his chest. Gu Yue really does come from a wealthy family!

He stood at the gates for a while longer, staring off into nothingness. The wind blew past him again, chill and crisp. Snapping back to attention, he made a beeline for the sidewalk and hailed a taxi to the train station.

He would go on a trip. Everything was already prepared.

Sitting at the top of his current priorities was obtaining the four spirit items necessary to break his next seal. He didn’t want to finish just short of the three month deadline. He wanted to break the fourth seal during his vacation. Once that happened, he would obtain a second blood essence soul ring, a major boost in power. Another reason why he was in a such a rush was because it was possible that the seal would break early. That could spell disaster.

After eating so much nutritious food this semester at Shrek Academy and at his Uncle-master’s place, he was confident that his body could endure the surge of power. Furthermore, his control over his blood essence had improved by leaps and bounds after mastering Golden Dragon Shocks the Heavens. In fact, his third seal breaking had been easy. He wasn’t too worried about the fourth.

Once Tang Wulin reached the train station, he bought a ticket for the first train to Heaven Dou City. To his good luck, Zhen Hua had agreed to prepare the remaining spirit items at a low price. It saved him the hassle of searching through the whole continent. Stopped him from overturning rock and stone.

Tang Wulin was actually quite rich now. He had plenty of alloys ready to auction off.

But it was hard to find what he needed in Shrek City, and the selling price for the alloys didn’t satisfy. These two reasons made traveling to Heaven Dou City all the more appealing. Once he obtained the last two spirit items, he would return to the Tang Sect headquarters in Shrek City to obtain the other two spirit items needed to shatter the fourth seal. Then he would visit Zhuo Shi for cultivation guidance. A tight schedule indeed.

The train smoothly cruised to a stop at the station and Tang Wulin boarded. He found his seat and sat down. Taking in his surroundings, he was astonished by the crowded rows and even more crowded seats. A trace of anxiety gripped his heart. If he closed his eyes, he could still picture in vivid detail the corpses that spilled over the carriage. The red that stained the ground. No matter the fact he had survived and neutralized the terrorists, it didn’t erase what had transpired that day. A tragedy.

His eyes fluttered open. Tang Wulin could not help but wonder how the kind female conductor was faring. Mo Lan. Her name stayed with him, etched into his heart, along with the brave manner in which she had offered herself as sacrifice.

“Ladies and gentlemen, please sit down. Please don’t block the aisle. You may store your belongings on the compartment above your seats if so desired. Oh sir, please watch your step.”

Tang Wulin flipped around in his seat to the owner of the voice and caught sight of a familiar face. It’s her!

“Big Sis Mo Lan!” Tang Wulin was up in his seat before he knew it. He waved. To see her in good health brought him joy,

Hearing her name, Mo Lan turned around and nearly jumped in surprise. “Wha! It’s you!”

In a few brisk steps, she was right before him. And then, her arms wrapped around Tang Wulin in a deep embrace.

Swathed in warmth, Tang Wulin could pretend he lay in the embrace of nostalgia, his mother, and most of all, home. It had been such a long time. He could hardly remember the feather touch of such warmth.

He looked up, keeping her gaze with sorrowful eyes, the start of tears building at the corners. “Big Sis Mo Lan!”

Mo Lan hugged him tighter. “Thank you. Thank you, Wulin. I can’t thank you enough. But why did you run off that day? I didn’t even get a chance to thank you before you left.”

She sniffed, her expression mirroring Tang Wulin’s. The surrounding passengers all fell into a hush, stunned to see the stoic, professional train conductor suddenly break into tears.

“Come with me,” Mo Lan said, rubbing at her reddened eyes with the back of a sleeve. She led him away by the hand, fingers intertwined.

The moment they were alone in the conductor’s chambers, the dam fell once more. Mo Lan hiccuped as she sobbed, soft enough so that only sighs and gasps could be heard. Ever since that fateful day, her outlook on life had changed. She would stand resolute even at the threat of her life.

When Mo Lan had finished recovering, her father tried to persuade her to quit her job as conductor. But she was determined to continue. Her reasoning had been simple. If she hid from danger because she was a city official’s daughter, then her father would lose the public’s trust and his authority would plummet. In the end, he couldn’t dissuade her. All he could do was reinforce the security on the trains and stations.

Mo Lan, lauded as a hero for how well she had handled the terrorist attack. However, deep in her heart, she knew that to be untrue. The real hero was Tang Wulin. Yet the information regarding him had been all but suppressed, wiped off the face of the earth. 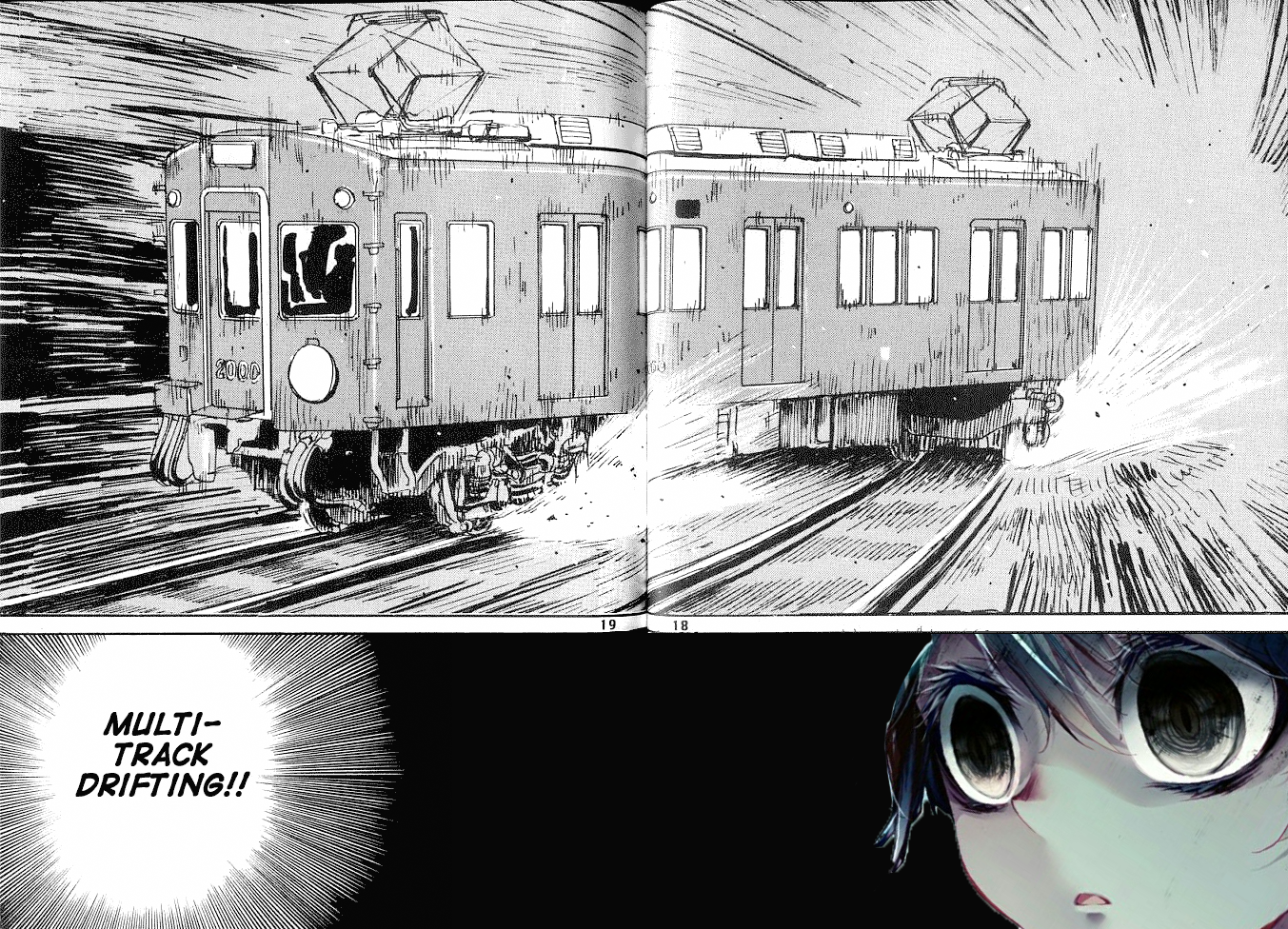