Chapter 462 - Crisis of the Fourth Seal

Chapter 462 - Crisis of the Fourth Seal

“Your fourth seal will only last three more months. You have to find the necessary spirit items and break the seal before then,” Old Tang said grimly.

“Huh?” Tang Wulin gaped. “Isn’t that too soon? Didn’t I have plenty of time?”

“At first, things were fine. Your strength was growing fast enough to handle the later seals and you were eating food that bolstered your blood essence. However, you did something that  loosened the Golden Dragon King seals. Cracks have appeared in the fourth sea and the suppressed Golden Dragon King power within is beginning to stir. If you don’t break the seal and take the power for yourself soon, the seal will collapse and the energies will run rampant in your body. At that moment, you might die. Tell me what you have been doing that may have caused this.”

Tang Wulin’s heart thumped. The first thing that came to his mind was his soul fusion skill with Gu Yue.

“A soul fusion skill?” he blurted out.

“Yeah! Gu Yue told me our soul fusion skill is called the Dragon God’s Nine Transformations. I didn’t get a chance to ask her about its specifics though.” Tang Wulin proceeded to recount all that had happened to him recently.

Old Tang listened quietly, knitting his brows from time to time, and pressing his lips tightly together as his shimmering figure hovered there.

“I can’t make any sense of it either. No one should be able to use a soul fusion skill with you. The Golden Dragon King’s bloodline has transformed your body into something that is is nothing like an ordinary human anymore. According to your story, that soul fusion skill consumed your soul power, blood essence, and spiritual power. All of these are the markers of a one hundred percent fusion rate for a fusion skill, meaning  that Gu Yue girl’s martial soul is compatible with yours. Except, you said her martial soul is the Elementalist. That can’t be. I can’t think of any other martial soul that could be compatible with you either.”

Tang Wulin didn’t expect that even Old Tang was baffled by this. “If even you don’t know, then should I go ask my teachers?”

Old Tang shook his head. “They don’t understand your situation, let alone your soul fusion skill. I’ll think about this carefully and see if I can find any clues. In the meantime, you have two urgent matters to attend to. First, you need to find the four spirit items within three months. With your current body strength, absorbing the power of the fourth seal should be easy. Second, absolutely do not use that soul fusion skill in the future unless you absolutely have to. It provokes the Golden Dragon King’s energy within you and weakens the seals. If you use it again, you might have to break two seals at the same time and you’ll be doomed to death. Understood?”

Tang Wulin’s heart tightened and he quickly nodded. “Got it. I won’t use it unless I have to.”

“Good. Also, since the fourth seal has been weakened, the timeline for the other seals have shifted as well. I’ll tell you how long you have as we go. Even I can’t evaluate them properly right now. Just do your best to prepare.”

Tang Wulin smiled bitterly. “Just be direct with me. I need to go make more money to buy spirit items.”

Old Tang gave a warm smile. “Yes, that’s pretty much it. You don’t need to be too anxious about it though. With your body as strong as it is now, you should be able to handle the next three seals. Your constitution will also continue to improve as you absorb the power of the Golden Dragon King. The effects will become far more apparent once you have four soul rings.”

The Golden Dragon King bloodline was like a double-edged sword for Tang Wulin. Although it offered immense power, it came at a high price. Tang Wulin’s head started to ache as his thoughts reached to how he would acquire the four spirit items needed for the seal. Fortunately, he lived in Shrek City now, the greatest city on the continent. Spirit items were in abundance there. He wasn’t too worried about money either. As long as he could smith, earning money wouldn’t be too hard.

I’ll go visit the Tang Sect when we get back. I need to earn some contribution points. The prices for spirit items are a bit cheaper there.

Light and darkness swirled before his eyes. A moment later, Old Tang and the golden hall disappeared and he was back in darkness. As his consciousness faded away, a question appeared in his mind. If I gain a blood essence soul ring every two seals, then what kind of soul skill will i get from my second gold ring?

When Tang Wulin woke up, he was lying on a bed. He raised a sore arm to rub his aching head, letting out a long groan as he opened his eyes.

“Ugh. My head hurts. Where are we?” Tang Wulin asked.

“We’re already back at Shrek. Don’t you recognize our dorm room?”

“Huh? We’re back?” Tang Wulin’s eyes went wide. Before he lost consciousness, they were still in Bright City! The distance between Shrek City and Bright City was by no means small. Just how long was I asleep?

“Teacher Wu’s flying car is really fast, much faster than a soul train! It only took us five hours to get back,” Xu Lizhi explained.

“That fast? Wow! Flying cars are so convenient! We should buy one next time!” Tang Wulin was amazed but also disappointed that he hadn’t been conscious for the ride. He had missed out on an amazing experience!

On the other hand, Xu Lizhi broke out into a cold sweat. “It’s nowhere near as amazing as you think. I feel sick just remembering the ride. Xiaoyan puked from the shaking, and I almost did too. Only Xie Xie and Xinglan seemed unfazed. You and Gu Yue were shaking in your seats too! Lucky for you, you weren’t awake. Anyway, that soul fusion skill is so awesome! You’ve gotta be hungry after that. You want something to eat?”

Tang Wulin hadn’t been exaggerating. For the next hour, he shoved pork buns into his mouth so fast it was like a raging waterfall. The only reason he hadn’t eaten for longer was that Xu Lizhi’s soul power ran out, so he had to meditate.

After Tang Wulin filled his belly with pork buns, a comfortable warmth spread throughout his body. His energy was quickly replenishing.

Tang Wulin’s body was far stronger than the last time he had used soul fusion skill, so the side effects weren’t as serious this time. In fact, they were relatively minor.

After examining his condition for a bit, Tang Wulin decided to test it in the future. First though, he had some matters to attend to. After the end-of-semester exam was a month of vacation. He needed to get his affairs in order before then, and find out whether his entire class passed or not.

Tang Wulin had to meditate for a bit before he had the strength to walk. When he got out of his bed, he found that all of his confiscated possessions were arranged neatly on his desk. He picked up his soul communicator and called Wu Zhangkong.

The moment Wu Zhangkong picked up, he told Tang Wulin he would come right over and to wait in his own room.

“Teacher Wu, how did we do on our exam?” Tang Wulin asked.

It's a Wu Zhangkong pic! Kinda wish it was more icy blue and less green. :| 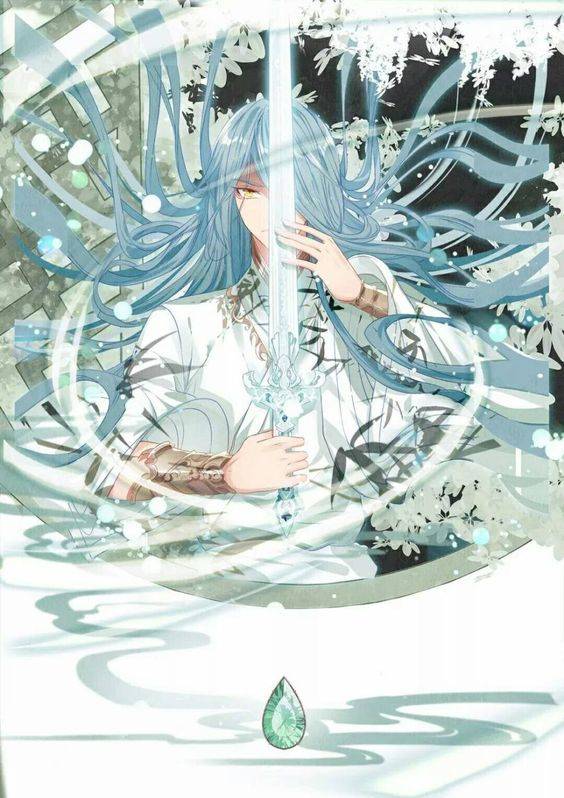