He’s handsome. And he’s a teacher at Shrek Academy! He couldn’t be any more perfect!

“Shrek Academy? Amazing!” Yan Feng suddenly batted her eyelashes at Wu Zhangkong. “Years ago, I really wanted to be a student there, and I even took the exams! But as you can see, I didn’t make it in. It’s a pity I didn’t, I might have been able to study under you.”

“No,” Wu Zhangkong said. “When you were still in school, I was a student as well. You’re not young enough to be my student.”

“Jeez!” Yan Feng pouted. “Is that how you always talk to a girl? Don’t you know how to make small talk?”

This guy! Yan Feng pursed her lips and glared at him, but after a while, she couldn’t bear the silence. “Since you’re a teacher at Shrek Academy, you should be a battle armor master, right? Are you a one-word or two-word battle armor master?”

Yan Feng’s eyes went wide. He’s only thirty-three and he’s a two-word battle armor master! He’s incredible! No wonder I couldn’t tell how strong he was.

“Oh,” she responded, trying to come off as nonchalant. “I just became a one-word battle armor master myself. For my first word, I chose ‘Phoenix.’ To tell you the truth, it isn’t a great fit for me. My martial soul is the fire gourd, and battle armor is usually named after a soul master’s a martial soul or spirit soul. But I couldn’t have possibly used ‘Gourd’, so instead I used the meaning of my own name. What about you? What did you name your armor?”

“Oh! That’s so cool!” Yan Feng exclaimed. “Why did you pick that? Is it because you have an ice-attribute martial soul?”

Wu Zhangkong finally looked up from his food and looked her straight in the eye. “‘Sky’ is the first part of my martial soul. ‘Ice’ comes from the meaning of my wife’s name. Don’t talk while eating. Just eat.”

His wife? Yan Feng was dumbstruck. He has a wife! Of course he has a wife! There’s no way a man as great as him wouldn’t!

A feeling of loss hit her like a truck, and her appetite disappeared.

The two ate in silence. Wu Zhangkong didn’t eat much, and he ate as slowly as ever, his mind wandering off to another time.

“Wow! Zhangkong, those candied yellow vegetables were amazing! The eggs were so delicious too! I can’t imagine how he cooked them so well. Just you wait. I’ll go learn how to make them and then cook the for you too, okay?”

“Hey, leave some tofu for me too! I heard tofu is good for the skin. My skin might be nicer than yours, but I still have to put in the effort!”

“These fishy stir-fried pork strips are delicious! Do you think I should eat another half-bowl of rice? I won’t get fat, right?”

“You dummy! Look at you. You have some rice stuck to your face. I’m not gonna kiss you while you’re like that. Ah! Don’t rub it on me!”

By the time Wu Zhangkong and Yan Feng finished eating and left the restaurant, the sun had reached its zenith.

Yan Feng flashed a smile at Wu Zhangkong. “Thank you for lunch.”

“Can you give me your number? I’m gonna go back to the Spirit Pagoda now and ask them to revoke the investigation request I made. I’ll call you once it’s done.”

After a moment of hesitation, Wu Zhangkong gave in and handed her his number.

“Next time I’m in Shrek City, I’ll go find you and we can have dinner, okay?” Yan Feng beamed.

Wu Zhangkong eyed her coldly. “I’m going. Goodbye.” Without another word, he turned and left.

As she watched his departing figure, Yan Feng let out a gloomy sigh. “All the good men are always taken. Really! When am I going to find a good man of my own! Heaven Spirit City is too small for me. Maybe I should head to Shrek City. I am a one-word battle armor master now, after well. Yeah. I’ll go ask the Spirit Pagoda to transfer me there.”

After their defeat in Heaven Spirit City, Tang Wulin and his friends had no choice but to change their plans. They ended up taking a detour, promptly piling into their soul car and heading straight for the next city.

Although they thought long and hard about it, they couldn’t come up with a plan more efficient than raiding someone at the Spirit Pagoda to draw out the enforcers. They had no other option but to go with the old plan. Fortunately for them, things went quite well. They cleared the next few cities without issue. No one questioned their supposed identity as supervisors, and a couple days later, they were halfway done with their exam.

“We’re on day four now,” Tang Wulin said as he studied their map. They were once again in their soul car, heading for the next city on their route. “We need to speed up a bit. We’ll do two cities today and another two tomorrow. Then, the day after that, we’ll arrive at Bright City. It has a lot of strong people, so we shouldn’t have to raid the Spirit Pagoda there. It’s the capital city of the Federation after all. Though we will need to be more careful once we arrive.”

At first they were anxious as they travelled from city to city, but their nerves had calmed down along the way. The challenges they had faced over the course of their travels were profound, and as they overcame them one by one, they grew more confident. The greatest challenge they had faced was Yan Feng, and from it, they came to understand the kind of might a battle armor master wielded.

As students of Shrek Academy, it was easy for them to take down a Soul King or even a Soul Emperor when they ganged up on one. However, when it came to battle armor, they couldn’t even penetrate its defenses!

“Wulin, I know a place in Bright City where we can find some opponents,” Ye Xinglan said abruptly.

“Ten thousand years ago, we were rivals with an academy in Bright City, and even today, our rivalry continues. Their students are some of the best. They can’t compare with Shrek, of course, but they can still be counted as one of the best academies on the continent. We should go pay them a visit.”

Gu Yue’s eyes lit up with understanding. “You’re referring to the Imperial Sun Moon Soul Engineering Academy? The one that has already been renowned as one of the great academies for ten thousand years?”

“Precisely.” Ye Xinglan’s eyes glimmered with excitement. “I heard both academies still harbor grudges against each other. Imagine how awesome it would be if we beat them!”

Tang Wulin nodded. “That makes sense. I think it’s a good idea. Let’s do it.”

“Talk about that later,” Xie Xie said, his voice trembling slightly. “First we need to deal with the problem in front of us.”

Everyone looked out the window to see what was ahead of them. What they saw left them stunned.

Twenty mechas lined the highway in the distance. Five were purple-grade and the rest were yellow. They had just arrived and formed a checkpoint. They wore the emblem of the Spirit Pagoda on their chest armor.

Tang Wulin and his group had cleared five cities, and the Spirit Pagoda had finally come to judge them.

“Wulin, what do we do?” Xie Xie asked as he slowed their car to a crawl.

Tang Wulin narrowed his eyes. Those familiar with him knew that whenever he made this face, something bad was about to happen.

“Stop the car!” he shouted. Without even waiting for the car to stop, Tang Wulin punched the car door and sent it flying. Then he grabbed the roof tore it open.

All six of them knew that they couldn’t afford to be captured. Although they would only be fined and forced to apologize if they were caught, there was a possibility that they could be sent back to Shrek Academy! Not only would that be shameful, they would fail their exam as well. Never in all of Shrek Academy’s history had a class president been expelled.

Tang Wulin refused to be the first. He didn’t want to drag his friends down with him either.

Xie Xie slammed his foot on the brakes, causing the car to swerve to the side. All of them had sturdy bodies. Even Xu Lizhi, with the defensive Tang Sect secret arts he learned, was just as resilient as the others. They were all unfazed when the car crashed into the highway divider and inertia sent them flying out of the roof in every direction.

On Gu Yue’s command, Xu Xiaoyan’s third soul ring lit up as she used Blizzard. She had already summoned her martial soul before they had been thrown out of the car. Combined with Gu Yue’s Elemental Tide, the blizzard rapidly grew until it swallowed the highway and the surrounding forest on either side.

“Into the forest! Quickly!” Tang Wulin commanded his companions.

Yet he, himself, stood still as he faced the approaching mechas.

Here's a pic of Wu Zhangkong and his wife, Long Bing! It's a scene of when they visited the restaurant and ordered the "usual", I think. :) 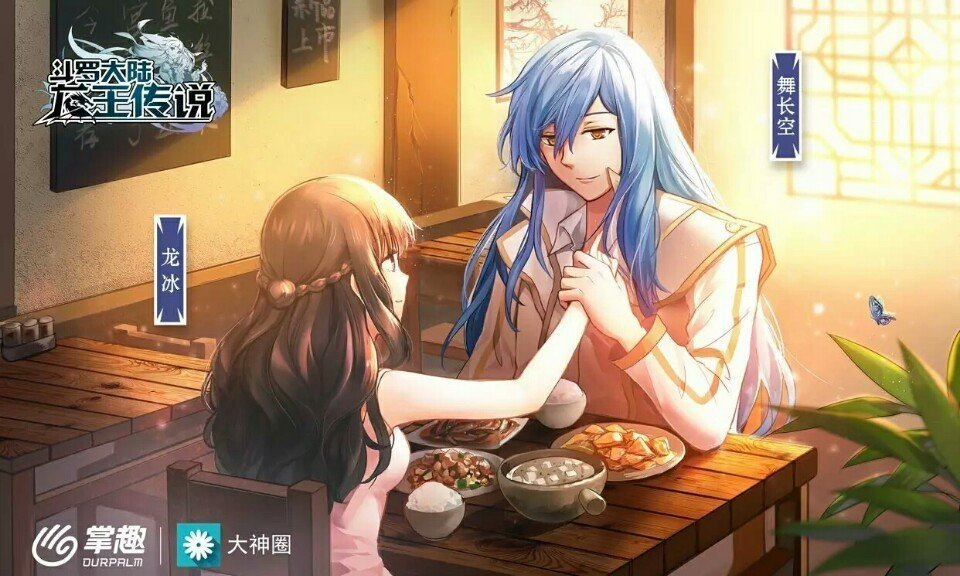