“President, can I try?” Tang Wulin bubbled with excitement. The concepts Zhen Hua had introduced were already mixing with what he understood about alloy forging, but he still needed to put it all to the test. His was itching to give them a try.

Zhen Hua stared at Tang Wulin in astonishment. “You want to… try forging an alloy?”

Hushed whispers spread throughout the crowd. The clerk who had led Tang Wulin here was already pressing a hand to his face. This kid... he’s got too much courage for his own good! He’s just like a newborn calf in front of a tiger!

Tang Wulin nodded, taking a step forward. “President, may I?”

Zhen Hua smiled. “If you think you can, then sure.”

The clerk ran over Tang Wulin, squatted down, and whispered, “Kid! Stop causing trouble! Just get out of here already, the President still has many matters to attend to.”

Zhen Hua chuckled. “Just let him come. It wouldn’t be right for us to trample over a child’s passion for blacksmithing. I can tell from his eyes. His love for blacksmithing is real. Come here, child.”

Tang Wulin hadn’t even glanced at the clerk. His eyes had been glued to Zhen Hua the entire time. He ran over to Zhen Hua’s side and began speaking immediately. “I need some heavy silver, star iron, and that universal catalyst you talked about, the skymoon powder.”

“Alright. Bring him what he asked for,” Zhen Hua said, gesturing to some of his staff members. Tang Wulin surprised him. In addition to a deep-rooted passion for blacksmithing, his eyes showed unwavering confidence. Not even the tiniest bit of stage fright could be seen on his face.

The blacksmiths in the audience shared in Zhen Hua’s surprise, but to Zhen Hua, none of them had so much as a fraction of Tang Wulin’s steadiness. Someone as excited as Tang Wulin currently was would usually at least be trembling, but Tang Wulin was steady as a rock. Zhen Hua also noticed that the boy’s hands were larger than average, and his fingers moved in a steady patterns. This was a clear identifier of an experienced blacksmith, a sign of Tang Wulin’s deep understanding of blacksmithing.

Very few things could catch Zhen Hua’s attention, but now his interest was piqued. He wanted to see just how high this child could reach.

The Blacksmith’s Association did not lack any metals whatsoever. Everything Tang Wulin asked for was quickly delivered to the forging area that had been set up in the hall of the first floor.

Tang Wulin didn’t stand on ceremony and immediately got to work. He walked over to the back of the forging table and opened it up. He put two pieces of metal into it, adjusted the calcining temperature, and turned the table on.

Then he turned to Zhen Hua. “President, could I trouble you for one more thing?”

Zhen Hua smiled warmly. “What is it?”

“May I borrow your hammers?”

The entire audience went into an uproar. Borrowing another blacksmith’s hammers was rarely seen in the world of blacksmiths, not to mention the hammers of the world’s only Divine Blacksmith!

Zhen Hua was stunned as well. This kid is really interesting!

Tang Wulin had no other choice. At this moment, he was completely broke. All of his worldly possessions confiscated by his teachers. Even his thousand refined tungsten hammers had been taken.

“Okay,” Zhen Hua answered. He muttered a few words to himself, and a pair of hammers appeared in his hands in a flash of light. He handed them to Tang Wulin. The hammers glistened in the light, their shape completely adhering to orthodox methods. However, they were a rarely-seen white. In addition to that, blue clouds danced across the surfaces of both hammers, giving them an aura of mystical beauty.

“I forged these hammers fifteen years ago, and they’ve been with me ever since,” Zhen Hua said. “I used them all the way until I could soul refine. See how they feel in your hands. If you really manage to forge an alloy today, I’ll give them to you as a gift.”

Although he didn’t believe Tang Wulin would succeed, he still wanted to encourage him. He himself had set a new record when he became the youngest sixth-rank blacksmith in the world at eighteen years of age. He knew from experience that such miracles were possible, and wasn’t as critical of Tang Wulin as the rest of the crowd. He could also sense that Tang Wulin had a solid foundation in blacksmithing. Yet he couldn’t fathom why Tang Wulin didn’t have his own forging hammers with him. A blacksmith’s hammers were their life. A proper blacksmith would never be without them. This was one of the first things a blacksmith learned.

“Thank you.” Tang Wulin gripped the hammers, one in each hand, then closed his eyes. When the staff and blacksmiths of the fourth rank and higher saw how easily he held the hammers, astonishment crept onto their faces.

Cloud gold was famous for its density. While the two hammers forged from cloud gold may have looked light, they were anything but. In fact, they weighed over two hundred kilograms.

Strength was critical for blacksmiths. Zhen Hua lent these hammers to Tang Wulin as a test, yet Tang Wulin held them up with no difficulty at all. They were steady in his hands, as if he were merely holding a pair of ordinary hammers.

This kid is actually a blacksmith? Everyone in the crowd could hardly believe their eyes.

At that moment, Tang Wulin pressed the button on the side of the forging table, and a glowing piece of heavy silver rose to the table’s surface. He tapped it lightly with the hammer in his left hand. A melodic note rang out, echoing throughout the hall. Tang Wulin froze after that tap, his brow furrowed. His ears twitched slightly as he listened to how the metal answered him.

The faint smile on Zhen Hua’s face finally cracked as he witnessed this. The lower level blacksmiths in the hall might not have understood what Tang Wulin was doing, but as a Divine Blacksmith, it was impossible for him to not.

Zhen Hua had been testing Tang Wulin from the moment he handed the boy his hammers. The weight was merely the first part of the test. How Tang Wulin would use these hammers was the next, more important part. He’s so young. He couldn’t be older than fifteen or sixteen. Even if he isn’t able to forge an alloy yet, he may be a promising successor. Let’s see just how talented he is.

The cloud gold hammers were the best test. Zhen Hua wanted to see if Tang Wulin could bring out their full potential.

These hammers were bloodbonded to Zhen Hua, and contained a piece of himself in them. They possessed a special effect similar to the stacked hammers effect of Tang Wulin’s heavy silver hammers.

Golden light flashed in Tang Wulin’s eyes, and he struck down with the left hammer once more. This time, it descended upon the metal like thunder! A boom tore through the hall when the hammer struck the glowing red piece of heavy silver, yet it did not rebound off the metal. The hammer remained firmly pressed to the heavy silver, and a moment later, a low hum began to fill the hall.

This was the tremor effect of the cloud gold hammers! The hammers harnessed the power of the vibrations that came from hammering metal to assist their wielder! Tremor was a high-grade effect, just like stacked hammers.

Tang Wulin kept the hammer pressed tightly to the heavy silver to bring out the tremor effect’s full power.

The crowd went silent. That strike was testament to Tang Wulin’s strength! The fact that he could wield the cloud gold hammers and prevent them from rebounding off the metal showed that his arms were strong enough to handle the recoil. Furthermore, the fact that he was able to stabilize the hammer showed how firm his blacksmithing foundation was.

Zhen Hua nodded in approval, a genuine smile forming on his lips. This kid is remarkable!

It's the original trio! 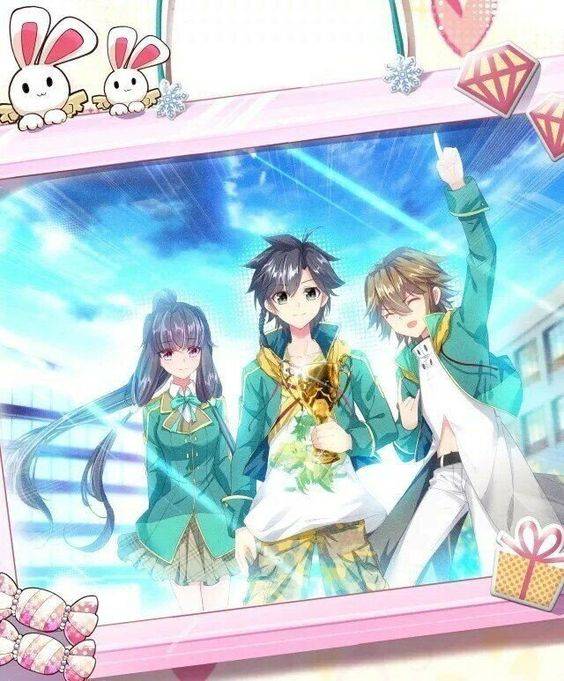