Trailing behind these three illustrious figures were Wu Zhangkong, Shen Yi, the teacher in charge of the second grade, and some profession teachers.

Tang Wulin looked at him. “We’ll just have to do our best then.”

Xie Xie nodded in agreement, then snuck a glance at Yuanen Yehui. He didn’t know why, but he felt that there was something different about her. As the powerful leader of the second grade, she wasn’t their dorm member that day. Xie Xie felt a bit nervous in the face of her imposing aura.

He still remembered the thrashings she had given him, fear lingering in his heart.

The teachers took their seats on a raised platform that overlooked the arena. Not even a moment later, the door to the arena opened and two more people walked in. They were arguing with each other as they entered.

“What the hell are you doing here?” the elderly man on the left said to the one on the right.

“I’m here to see my disciple stomp his competition. At the very least, none of those brats in the second grade can challenge him. I’m more interested in seeing his progress. Why are you here? Don’t you have things to do on Sea God’s Island? This is the outer court. You shouldn’t have any business here.”

“I’m here to check how much my granddisciple has grown. I heard he defeated the Hell White Tiger, so I’m curious if he was able to because he mastered the secret art I taught him.”

“Bah! You’ve taught him nothing but shit! Don’t lead my disciple astray with your tricks.”

“Have you gone mad? You crazy old bastard! I swear, if you dare deceive my disciple, I’ll butcher you!

“Don’t think I won’t do it! You’re just a craftsman! If you think you got what it takes, let’s fight! I only need one minute to beat you to a pulp!”

The people who had just entered were Tang Wulin’s blacksmithing teacher, Blazing Dragon Douluo Feng Wuyu, and his grandteacher, Scarlet Dragon Douluo Zhuo Shi. As the two quarrelled, their eyes landed on Tang Wulin. Fortunately for him, they still had some reason left in them and didn’t run over to him. They ascended the platform and took their seats with the rest of the elders. They gave a slight nod of greeting when they saw the Silver Moon Douluo, but as soon as they saw the Holy Spirit Douluo, they leaped to their feet, backs ramrod straight.

Zhuo Shi ran over to her hastily. “Yali, how are you today?”

The Holy Spirit Douluo glanced at him. “I’m here as the referee today!”

Feng Wuyu popped up on the other side of her, rubbing his hands nervously. “Yali, long time no see!”

With his Purple Demon Eyes, Tang Wulin could clearly see what was happening on the platform. He was stunned by the expression on Feng Wuyu’s face. Since when could Teacher act so bashfully? Why’s his face so red?

Zhuo Shi turned to the Silver Moon Douluo. “Why don’t we talk for a bit, Yue’er?”

Elder Cai rolled her eyes at him. “Why are you two here? If you want to watch the match, then do so quietly. Otherwise, get lost!”

“Isn’t it normal for me, an elder of the Sea God’s Pavilion, to come watch matches in the outer court? I’m not a blacksmith just coming for entertainment.”

“What’s that about blacksmiths? If it weren’t for us, would you have battle armor? Just you wait. Once you reach the four-word level, I’ll tell Zhen Hua to leave your ass uncovered when crafting your battle armor. Then you can go fight with a bare ass!”

“I’ve already tolerated you for a long time, Feng Wuyu, but don’t you dare provoke me in front of Yali! I’ll whoop your ass!”

“Enough!” the Holy Spirit Douluo barked, giving them a sharp look. Like obedient dogs, the two old men ceased their bickering and shut up. Despite their anger, they said no more.

“You two were late, so sit in the second row. Don’t disturb the children,” said the Silver Moon Douluo.

“Oh.” Feng Wuyu tiptoed to the back row.

“Okay!” Zhuo Shi rushed to the seat directly behind the Holy Spirit Douluo. “I’ll sit behind you.”

Feng Wuyu was a step too late. He glared at Zhuo Shi, but Zhuo Shi didn’t budge. The two then began shoving each other.

The Holy Spirit Douluo frowned, and without turning back to face them, said, “If you two can’t settle down, then leave.”

That got the Holy Spirit Douluo to turn around, and she glared at them. Her burning gaze immediately silenced the Twin Dragons, and they quietly took their seats. She shook her head helplessly, turning back to the stage.

Only then did Elder Cai gesture to Shen Yi.

“Hello students of the first and second grade,” Shen Yi said, rising from her seat. “I am Shen Yi, the teacher for the first grade. Today’s competition will be overseen by the Holy Spirit Douluo and the Silver Moon Douluo. After speaking with the second grade’s teacher, we have decided that, in the interest of saving time, each profession’s match will consist of one challenge. Now, would both grades’ representative blacksmiths come up to the stage.”

Two massive forging tables had already been prepared on-stage. Today’s competition had the two classes competing in every aspect. They would first begin with the professions: blacksmiths, designers, makers, and mechanics. The team battle would come last. As his class’s blacksmith representative, the first battle was Tang Wulin’s to fight. He went up onto the stage.

Feng Wuyu had a proud look in his eye as he turned to Zhuo Shi. “You’ll see what it means to steamroll someone in just a moment.”

Zhuo Shi rolled his eyes. “That’s just because my granddiscple is that talented. This has nothing to do with you.”

“I’m his blacksmithing teacher. How does it have nothing to do with me?” Feng Wuyu fumed.

“Alright, fine. Let me ask you then. What blacksmith rank was my granddisciple when he first got here?”

“The... fifth rank…” Feng Wuyu failed to realize his mistake in time.

Zhuo Shi gave him a look of disdain. “My granddisciple was already a fifth-rank blacksmith when he arrived, which is more than enough to show that he’s a blacksmithing genius. He’s still a fifth-rank right now, which shows you’re a useless teacher. He hasn’t improved one bit.”

Zhuo Shi didn’t resist, and instead simply snorted. “What are you doing, attacking those above you?”

A red hue seeped into Feng Wuyu’s eyes. “How the hell are you above me?”

Zhuo Shi smirked. “You’re my granddisciple’s master, and I’m his grandteacher. You and I are from different generations. When you see me, you should at least call me Uncle Master, if not Master. Doesn’t that mean you’re offending your senior by grabbing me?”

The Holy Spirit Douluo turned around and glared at them once more. “You two! Behave or get out!”

Feng Wuyu let go of Zhuo Shi and lowered his head, acting as if the commotion had nothing to do with him at all. Zhuo Shi lifted his hands helplessly and shrugged. Then he pinched his fingers and zipped his mouth shut. He didn’t say another word.

Elder Cai smiled and whispered into the Holy Spirit Douluo’s ear, “As expected of you. You’re the only one who can keep those two in line. I’m no match for you when it comes to them!”

The Holy Spirit Douluo shook her head. “They’re just a pair of buffoons!”

At that moment, Tang Wulin and his opponent arrived on-stage. The boy that stood across from Tang Wulin looked far older than him, about sixteen or seventeen years old. He had an average appearance and height. The only thing that really caught Tang Wulin’s attention was the boy’s large hands and muscular arms. He clearly had a calm disposition. His eyes had been glued to the forging table since he arrived. He didn’t spare Tang Wulin a single glance.

Tang Wulin nodded to himself at his opponent’s behavior. As expected of the second grade! He’s definitely their best blacksmith.

This wouldn’t be an easy win for him.

The boy finally looked at him and nodded. “He Xiaopeng, blacksmith representative of the second grade.”

Come embark on the crusade to defend your best boy in the Best Boy Competition!

Also, the results of the Waifu Competition are out! Gu Yue is the winner! 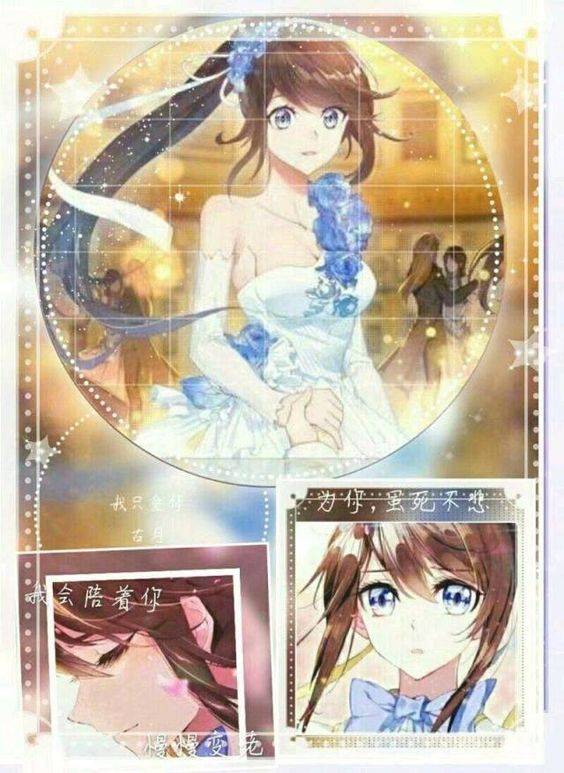