Pasoon stopped moving. He recalled the painful memories of begging the magic dragons for their medicine just six months ago to extend his termination deadline clause.

“That’s pretty exciting news. I thought you’d be the first to figure it out.”

“Then, does that mean the human child that Siluone cultivated has become useless? Did you hear that it was a boy?”

Satan kicked the ground with her white feet. She then added, “He will become the seed that will grow to become the supreme god… He will lead an army of gods…!”

Pasoon shook off the dust from his clothes and got up. Satan also straightened up. It was time to leave. Pasoon asked offhand, as if in passing by, “You asked me to divide the empire, was there a way you had in mind?”

Instead of immediately answering, Satan smiled. She then replied, “Isn’t that what you do best? Wreak havoc and sow chaos?”

“What level of division?”

“Good enough for us to pluck and eat.”

“Which area? What’s the scope?”

“Across the entire empire”

“Hmm… that’s a little tricky, but there are many ways.”

“Good luck, I wish you all the best…”

“Where are you going?”

“I will move the gods. ‘Human Wars’ are always a good time to conduct business with the gods.”

“I will bring the war you want. Ugly divisions and feuds, such wars that tear left and right, break up and down, where fathers abandon their sons, and where sons stab their parents. Ideology wars. That’s the most effective. Freedom and equality… yes. This should be enough.”

These were the words Pasoon left to himself in the air.

The two were moving quickly.

The spring morning’s mist still loomed over the fields. The fresh scent of the grass rising from the green earth was refreshing. The morning mist rose from the Prigo River, which wound around the outskirts of the Imperial Palace.

The two were leisurely climbing upwards along the banks of the Prigo River. If one followed the river, one would catch a glimpse of the white buildings near the hills in the distance. This was the site of Tehara’s Temple, revered as the incarnation and god of the sun. His Greek equivalent would have been Apollo.

The two were carrying out the final process to ensure their security and to put themselves in a position to win the final war. They were piecing together the relationship between the Outsiders and the gods.

Priestess Rho looked at the man and woman alternately. She was a unique person. Although she was dressed like a commoner, they could recognize the dignity she expressed as a noble. She was probably from a relatively poorer, lower-class aristocratic family.

“I am San, and this person is called Yeon. We would like to see the chief apostle of this temple,” San said with a smile.

“Are you both nobles? What are your titles?” Rho asked.

“Nobles… well… I guess you could say we are, but I’m unsure of our titles. Probably a duke?”

San’s lips twisted slightly and curled up. A small smile spread across Rho’s face. ‘Jokes are meant to be enjoyed,’ she thought…

“It’s difficult to meet with the chief apostle of this temple. Due to regulations, only those who directly communicate with the gods and high-class nobles can be given an audience. If it’s okay with you, would you like me to ask the assistant priest for an oracle?”

“What is the standard for high-class nobility?” Biyeon asked.

“It refers to those who hold the title of duke or higher.”

“If you want to be connected and yearn for it earnestly, the God Tehara will show you his power,” Rho said as she nodded her head.

“Well… it doesn’t matter. Even if a dynamite’s line is faulty, it’s all okay if it explodes in the end, right?”

San looked at Biyeon and smiled. Biyeon covered her mouth with her hand and chuckled.

“Then please wait over there, write down your wishes, offer your sacrifices, and offer up your prayers. The priest will come by soon.”

“Most believers state that… cash is the most effective way to pray.” 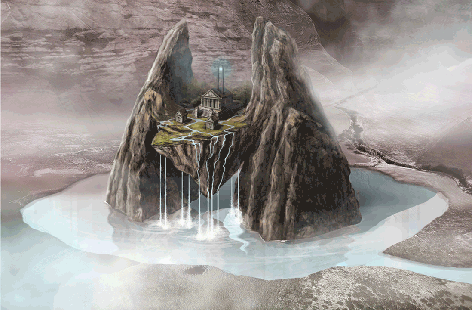 The two were looking around the temple as they waited for the priest to come by. Although it was early in the morning, there were many visiting believers. Nobles, commoners…

It was widely known that the power of the Sun God, Tehara, was very great. He was the god who ruled the day, who traveled across the vast sky, and who distributed light and heat down onto the earth. Even today, those seeking his protection and longing for more light were congregating and standing in front of his main worship hall.

[There are surveillance cameras here too.]

[It must be an asset necessary for their business. There are probably voice and temperature sensors as well.]

[Yeah… I guess it’s needed to become a pharmacist who can correctly diagnose a believer’s calamity.]

Biyeon looked at the gathered believers. Their deep and clear eyes were filled with various emotions. Some expressed deep pity and sorrow, and others expressed anger so strong that Biyeon herself could not understand what they could be so angry about. The believers were largely divided into these two groups. There was a class of people who wore high-quality clothes and flirted with their slaves and servants. Then there was the other group of humans who tirelessly traveled with their sickened bodies and waited for the god’s blessings. The latter group waited for the temple’s doors to open with open, imploring eyes. This was a space where the two disparate groups strangely coexisted. It was painful to see people lying here and there with various injuries and maladies. The strong scents of perfume, sweat, body fluids, and medicines mixed to create a strange smell, which filled the great temple.

San slowly moved forward and looked around the temple’s waiting area. The temple was a three-story, square-tiered building. On one side was a marble staircase leading to the upper levels of the temple. On the left and right of the stairs, stone statues that symbolized the gods were majestically watching the believers. Furniture with large drawers were lined up throughout the interior, and boxes were stacked for storing medicinal materials and finished medicines. The medical business was the main business of all gods. The priests diagnosed the diseases and prescribed remedies in the name of their god. San smiled bitterly.

‘Certainly, the gods of this world are clever beings…’

For humans, sickness was both painful and bad. Illness belonged to an ‘absolute evil’ that human beings could never accept. Thus, the gods naturally acquired the status of ‘absolute good’ by diagnosing and curing the ‘absolute bad’ diseases.

The gods had a very tempting, useful power. The ability to read the human body and detect abnormalities, the ability to manipulate information to reduce pain through anesthesia and hallucinogens, and the communication ability to find and hear what the humans who sought them wanted to hear.

This was how gods handled information and established logic. Furthermore, they conducted all of this under the guise of justice and absolute good. What did the gods want in return? They wanted the friendly attention of humans in return. Where did faith come from? Didn’t it originate from human dreams and aspirations? A hope to overcome a difficult life and live a life worth living. Thus, the god who grants wishes was always righteous and good. The problem was that they didn’t particularly listen well. Wasn’t the truth that the gods didn’t really have any abilities at all?

What about the demons who were diametric beings to gods?

San recalled a conversation he had with magic dragon Siluone.

The magic dragon, a demon, directly showed pleasures whenever humans were threatened. Demons unleashed the destructive powers that lie deep within human consciousness. They awakened the chaos from the realm of instinct.

Delicious food, fun, thrilling competition, ecstatic hostility, annihilation, the joy of raw pleasure that couldn’t be given up even if one’s body was broken… the stinging sensation one felt down to one’s tailbone… a madness that ran deep enough to burn one’s soul…

In this way, demons provided humans with emotions that were much more direct and personal, and the rise of emotions elicited a powerful reaction and recognition. In return, demons obtained voluntary obedience. Thus, demons, by awakening the primal natures of humans, created a very stimulating and powerful demand for themselves. Addiction… like drugs or games. Thus, demons sparked stimulation within humans and eventually broke the balance of one’s life. Because of this, people came to understand that demons were inherently evil. Reason was right and emotion was wrong? But what if there is no demon? San quietly thought these things before shaking his head from side-to-side.

‘If there were no demons, humans would become powerless. Like a frog immersed in boiling water, humans may enjoy a pleasant lethargy without the presence of evil and may just quietly enter extinction… thinking about it now, aren’t gods and demons all ‘essential elements’ that make humans truly human?’

“Is that the VIP waiting room over there?” Biyeon said as she looked to one side of the temple. Near the entrance to the temple, there was a separate space draped in luxurious blue-grey drapery. People who appeared to be nobles were seated in the space. Those who appeared to be apprentice priests were busy serving the nobles hot tea.

“They must all be great, highly esteemed people, huh?”

Where the two stood, there were others. There were people who couldn’t even lay down their sick bodies and stood steadfast through their pain in the long line, waiting for their turn.

Biyeon smiled at the approaching priests. Behind them were many young children. Sick children. Perhaps they came to get some medicine to relieve their pains.

“Have you made an offering?”

A fat priest asked San. The priest’s eyes were full of signs of annoyance. San was dressed in a simple T-shirt, jacket, and jeans. Next to the fat priest was a woman who seemed to be a high priest. She held a wine-colored holy water and looked around the gathered believers.

“How much do you request?” San asked once she came in earshot.

“It depends on your wish. You don’t seem to be sick, so what wish did you come here to make?”

“I don’t have any wishes, I just wanted to talk to your god for a while.”