“Indeed, the world that we lived in was too stimulating. It was also glamorous.”

“Has our earth been destroyed?” asked Biyeon out of the blue.

“I’m talking about World 285 that Senun mentioned. Didn’t he mention something about self-destruction?”

“Yeah, he did. Does that mean that we have no place to return to?” said San bitterly.

Even though he had heard it, he had casually turned a deaf ear to it. As for what Biyeon said earlier, it did not seem real at all. If it were real, they would have been considered lucky, as they were saved from destruction by being summoned to this place. Nonetheless, the situation seemed more like an absurd joke to them. A destroyed world. Fugitives. Unregistered individuals. Étrangers (French term for ‘foreigners’) who had nowhere to go.

“Since the time zone of every episode is different, it’s not entirely hopeless. Who knows if we might go back to the past like in the movie, the Planet of the Apes?”

“You think so? It’s a little comforting to hear that. But why?”

“No… Because the talk about self-destruction is bothering me…”

“Those damned bastards must have waged a nuclear war.”

“I don’t think that’s the case. Senun said that it got destroyed because the balance of evolution was broken. Previously, Linuel and Gapael mentioned something about a ‘seal’.”

“I heard it, but I’m not too sure what they were talking about. What does it mean?”

“I wondered if they might have become numb like us and so they created all kinds of stimuli to excite themselves, which led to self-destruction, not being able to tell the difference between fantasy and reality.”

“Well, that’s plausible, I guess. So, you’re saying that ultimately, those human beings ended the world because they were too bored? Why? Do you by any chance want to go back and save the earth?” San laughed. Biyeon smiled.

“If I could, I would be more than happy to do it.”

“I’m not going to wear a bikini, though.”

“What are you going to do to stimulate yourself then?”

The both of them looked at the imperial palace with a smile on their faces. The road to power. White, yellow and red flowers stretched endlessly along the palace’s neatly-decorated stone walls.

Biyeon continued, “I thought about the deadline.”

San stopped walking. He held Biyeon’s hand and sat down on the flowerbed.

“Can you elaborate a little more?”

It was an extremely sensitive topic. Biyeon still had three years left. However, they still did not know anything about the deadline. Nobody provided any information about it. They were not certain what it entailed or what it meant. Nonetheless, the possibility of them losing each other alone was their greatest fear. The deadline was ‘something’ that even powerful beings, who regarded death as a laughing matter, constantly wanted to escape from. It was a fear that even dragons, who possessed all the knowledge in the entire world, could not comprehend. It was akin to a curse from the Creator. Hence, the Magic Dragons might have given those two a mission to undo those shackles.

“Why are the dragons so afraid of the deadline? They can be resurrected though…”

“Hm, maybe they are afraid the Creator would not resurrect them? I don’t think there is a clear answer to that…”

San waited for Biyeon to continue with a worried look on his face.

“What do the dragons and the Fallen have in common?

“I don’t know… They are terrifyingly strong. They have a clear mission. What else?”

“They have no regrets or desires.”

“No regrets or desires?”

“They are strong and powerful beings who have everything; they are guaranteed to live forever; they are committed only to the missions they were given; they have no desire for progress. Hence, there is nothing more they desire. Who do you think is similar to them?”

“Even presidents have something they want - they want to become a person who others will remember forever after they have retired.”

“Old people who are dying?”

“They wish to go to heaven.”

“It reminded me of senior sergeants in the army back in the day, and junior civil servants who dealt with petitioners in the past.”

“I can kind of see that. There was a limit to their promotions. They did not gain any recognition regardless of how hard they tried… Their retirement age was guaranteed… But what’s the issue?”

“I think it will help us understand the dragons’ situation. What do you think is the greatest fear...of those people?” Biyeon looked at San.

“Complaints from the public?”

Biyeon shook her head once more.

She whispered, “The law.”

“The law? Wasn’t it the other way around?” San cocked his head to the side.

“No. Those people know the law very well. Ordinary people are not well-versed in the law. Most people have never read anything pertaining to the law in their entire lives, am I right? They just go about their daily lives.”

“Even though those people are able to find loopholes and abuse it because they know the law well, in truth, they are very scared. Hence, the Creator would have come up with a contract, which is known as the deadline.”

“What if the contract is violated?”

“There would be grounds for enforcing the law.”

“In other words, they will face judgment. In the eyes of human beings, life after death is just a fiction, but to the dragons, it is something that will become a reality. It is something very terrifying.”

It was a world where everything in mythologies existed. How could hell not exist? Their fears were becoming more realistic.

“No… If hell was real, there would be heaven and purgatory. I haven’t committed many sins, so heaven…”

“Don’t say things like that. What the fuck, heaven?”

Biyeon shut her mouth. There was a moment of stifling silence between the both of them.

“There must be a way to get rid of the deadline. I’m telling you that we will find a way to do so. Up until now, was there anything we’ve done that wasn’t the worst thing we’ve ever done? That freaking dragon…goddammit! Let’s go. The kids must be waiting for us.”

San dusted off his pants and got up. Biyeon was still sitting down, staring blankly at San.

“Didn’t I say we should get going? What’s wrong?” said San, sounding a little annoyed.

Biyeon leaned forward and got up, looking slightly flustered. She seemed as though she had something to say but she kept her mouth shut…

Biyeon reorganized the thoughts that abruptly came to mind.

“Yeah… What human beings have that dragons don’t… There may be an answer to that. If the Creator is the same as the ‘one and only God’ that I know…”

It was getting dark. The two long silhouettes walked with pride. The sunset was fading majestically in front of them. The black chaos was expanding its influence; it was as though it was going to devour the world.

Biyeon looked at San’s side profile. Her face looked slightly reddish because of the sunset. San was no longer feeling sad; he had a warm smile on his face.

“Give me your hand.”

Biyeon subconsciously reached out her hand.

“No, give me your right hand.”

San placed Biyeon’s fingers on his palm and placed his other hand on top of it. Biyeon’s hand could not be seen as it was covered by his thick palm. San looked straight into Biyeon’s eyes. She did not look away.

“The One Ring (Lord of the Rings reference).”

“The specifications are up to you.”

“Strength that overcomes everything - that’s something great that only humans have!”

Adam and Eve received the very first deadline on earth… The deadline system, that nobody in this world could solve, became the biggest challenge faced by these foreigners. Perhaps, they might be the archetypes of an actual person brought in from ‘Adam’s Era’ in episode 285. Or maybe, it was a quest that the Creator hid before he manifested himself in the future. Who knows?

Rain and her crew put up at a luxurious lodging on the east side of the outer palace. It was built for the chief envoys who came to visit the emperor, as well as the high-ranking diplomats, who were stationed in the empire. It was a wealthy neighborhood with colorful buildings; a place where people of various races from various places came to engage in diplomatic activities and socialize. 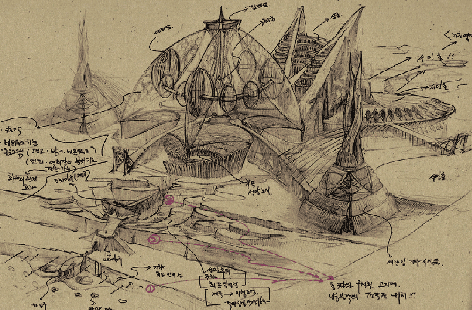 As soon as Rain arrived, she changed into a formal dress and left for the palace to meet with the emperor. Gun had to report to his mother’s residence as well, hence he parted with the crew a little earlier. The people from Dong-Myung Clan and Ki-Jang Clan had already left, as they had to meet with the former members. Dobel’s ‘Doha’ Merchant Guild and escorts had left for their Prigojin branch. They parted in the hopes of meeting again. Only the Essen crew took some time off, enjoying themselves in their fancy accommodation.

The members looked around the astonishingly glamorous garden and the huge yard, picturing their dreams.

“Something is missing,” said Yuren, as he looked around.

Raron added, “The walls are too high…”.

“There are no tall trees,” Yekin continued.

“The ground is made of big stones…” Katon got down on his knees and patted the ground.

They were in the midst of doing some basic preliminary reconnaissance. In the future, it might be difficult for assassins and their movements and routes to get past them. Merin, the imperial court cleric, who was escorting them, cocked her head to the side. These ten people before her eyes were unlike any other people she had ever met. Truthfully, she was starting to get a little annoyed. Why did they have so many questions?

“They are such strange people… I heard that they are villagers from the northern region, but they are truly giving off all kinds of rustic vibes…”

Merin wondered if they had indeed truly gone on that great adventure as rumored.

“Where are you going? If you want to eat, you must wash up, get properly dressed, and follow rules of etiquette. We don’t have much time. Also, please stop asking questions, okay?” said Merin with a tinge of nervousness in her voice.

“By the way, where is the dining hall?”

Hello all! Nice to be a part of such a vibrant community and offer my humble services for this neat, original (at least to me) novel. A little background about me: I’ve lived in Cali nearly my whole life; my experience translating mainly stems from jobs I did...