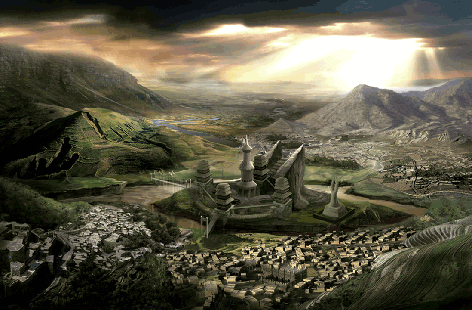 Prigojin! It was the name of the capital of the Damun Empire, which dominated the largest continent, ‘Uran’, spanning 14,000 km from east to west and 8,500 km from north to south. It was a megalopolis with a population of 6 million people, and the largest cultural city on the continent, as well as the center of politics, finance, education and diplomacy. It was at the heart of the hegemonic empire that encompassed five kingdoms and sixteen principalities.

There was a procession taking place. It was a typical afternoon in fall, where the sun casted long shadows. The eyes of the citizens traveling through the city were fixated on one place. Even though the place was flooded with high-ranking officials, it was evidently an eye-catching procession.

“I see the princess.”

The First Imperial Guard of the empire personally lined up the troops to welcome Rain’s procession. Their demeanor was very respectful. Rain slightly bowed her head from the carriage that was in front of the procession.

It was the empire’s Second Imperial Secretariat. It was a scary position, and one that was ridden with responsibilities. His rank was Taeshin, which was equivalent to that of a minister. Since he worked directly under the emperor instead of the prime minister, he had more authority than a Taeshin official.

From the time the crew members stayed in a nearby city, which was about a day away, all the officials under the Secretary of State had already started preparing for Rain’s procession, waiting in advance for them. It was meticulously prepared according to the number of the crew members. San was dumbfounded by how meticulous they were. The intelligence capabilities of this empire were remarkable - they were fast and accurate. Gathering intelligence was the core competence of this empire. All the people who built the foundation of this extraordinarily large and ancient empire pioneered the act of gathering intelligence. As such, the royal family was sagacious and possessed deep-rooted knowledge.

“Are we…being welcomed right now? But for some reason, I’m not exactly pleased with it.”

Peering eyes were everywhere. There was a man who had been there since they left Odum; a man who joined them in the next city; a man who followed them on the streets; a man who infiltrated the merchant guild and came along with them… Also, a glass-eyed man behind the curtains in the two or three-story building, who was rolling his eyes; a dangerous man; a scary man; a man who was laughing; and not forgetting, a confused man…

Biyeon smiled wryly, and pressed her hat down. Her keen senses were carefully sorting through the gazes coming from people who were deliberately strolling close by. Subconsciously, she started accelerating wildly on her own. The wall-breaking sensation of the next stage had already deprived her of sleep, and now, it was disrupting her tranquil daily life.

“Perhaps this is a curse…”

The strange sensation was entering and leaving her body, explosively multiplying like a virus. All kinds of ‘sensations’ were incessantly emitted from all over the place. These sensations were ferociously screaming in her mind. It was not easy for her to deal with them. Taste, smell, color, sound, tickling sensation, temperature, stickiness, and countless of mixtures that could not be named or described. They were attributes of the world that could be manifested in myriad ways. Biyeon could sense a dimension that was forbidden to man. Every second, everything was being disassembled, analyzed and organized in Biyeon’s mind. It was a process that could not stop and did not stop. She was past her tolerable limit, and was about to go insane…

Her distracting thoughts were suppressed in an instant.

The woman sat on a rocking chair, looking down at the view below. She was holding a small knife in her hand. She looked like a mature woman in her 30s with a curvaceous figure. However, her actual age was much older. She was slim for her height; the slightly blue veins on her pale long and slender fingers stood out. Her eyes were fixated on something outside the window, as she trimmed her long nails. The cool breeze blew the curtains around, but not to the point of obstructing her view.

“It seems like she’s really going to do it. Even though it’s foolish,” said the man standing next to her.

He was a big man with well-developed muscles.

“Maybe. It depends on how desperate she is to live. Or if she has a lot of confidence.” The woman’s lips moved slightly.

“It seems like she has found some people to work for her?” The man stroked his shaved chin.

“Essen, in the north? She has traveled far. I’m intrigued. What kind of talented people did she turn to for help?”

“I wonder. Are there skilled people from the countryside? Even if there are, the tasks in the royal palace are not something a mere villager can handle.”

“Even so, do not let your guard down! Your rival is a genius. Her plans are well thought out and meticulous. Furthermore, they did not take the easy route and managed to traverse the Forbidden Grounds. The Forbidden Grounds, though - can you even imagine it?”

The woman looked down.

“Well… she has already earned the reputation of being a hero. Everyone in the empire has heard of Rain’s name. Her status as the princess alone is already enough to cause a huge ripple effect.”

“Perhaps…it was an intended adventure?”

“No way, what could possibly be the reason behind such an impractical act? Fame?”

“For all we know, she might have found some really incredibly skilled people.”

The woman’s hands paused for a moment.

“Who knows… I acknowledge the fact that those people accomplished what they did in just one attempt, but right now, many adventurers are going to take up the challenge and go to the Forbidden Grounds.”

“Maybe the Forbidden Grounds is not as amazing as what the rumors say. Even nobodies like merchants and low-ranking warriors could pass through without a hitch. Its reputation might probably fade over time.”

“What do you think? Should we take a stab at it? It’s probably not that difficult.”

The woman who was trimming her nails paused for a moment. She lifted her finger and frowned slightly. Blood was already oozing from the spot where the blade of the knife had grazed her. The color of her blood was purple. The woman brought her finger close to her eyes and stared at it for quite some time before sticking her tongue out to taste the blood that was oozing out. Her movement was oddly slow, graceful and playful at the same time. She pursed her lips and swallowed. The corners of her mouth were faintly stained red, which naturally matched the sensual vibe of the woman, as if she were wearing lipstick.

The woman dusted off her chair and stood up. The wound on her finger was already healing.

“What should we do?” asked the man named Jagwan, who was from a noble family called the Sa-Myung Clan.

The woman, named Baya, was wearing the jacket that she had taken off earlier. The most powerful family on the maternal side of the royal family, the Jung-ha Clan’s crest was engraved on the fibula on her jacket. Baya grabbed a small bag and walked out.

“Summon all the councilors in Prigojin. It would be a pain in the neck if those stupid players make a move on their own. People who foil my plans cannot be forgiven,” said the woman as she turned her head slightly.

“Where are you going?”

“Gun is back. I think there is something I must hear from him directly.”

“Are the magic dragons not cooperating with us?”

“There aren’t a lot of mutated magic dragons as of now. Regardless, even a magic dragon would feel awful having to sacrifice their children in order to eradicate the original beings’ deadlines. Nonetheless, if the sages are a handful of intelligent generals, our councilors are combatants with a massive military force. We have to cooperate until we are stable enough. What can they do?”

“When will we stop having a shortage of nectar…”

“After Satan is done with his research on human beings. Alright, I’ll make a move first. Thank you for the tea.”

Jagwan stared at the back of the woman who was leaving. He took a deep breath. There were faint traces of the smell of her blood. The scent was insanely sweet and captivating. 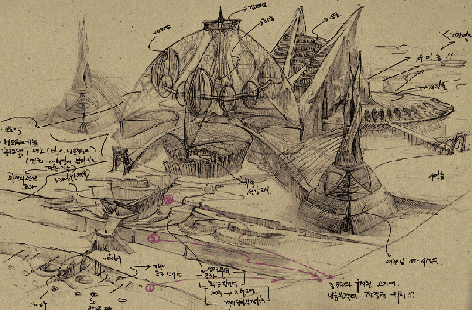 San and Biyeon were enjoying their evening walk.

They had nothing to do as everything had been taken care of by the palace’s butlers… At least both of them had arrived at the heart of the empire that dominated this world, and so, there were many things they were curious about.

The antique buildings, gardens that were filled with flowerbeds, and the artificial lakes harmonize with one another, exuding the vibes of an ancient palace. The imperial palace was really huge. The entire layout of the palace was square-shaped; it spanned approximately ten kilometers from one end to the other, requiring more than two hours on foot.

The fallen leaves were being swept by the wind on the stone floor. The two of them were enjoying a late night stroll. Biyeon folded her arms and tilted her head to the side, leaning against San’s shoulder. This was a typical posture commonly seen amongst couples on earth in the 21st century. Needless to say, it was considered unusual where they were currently at, not that it mattered…

“I guess I was expecting too much.”

Those were their honest feelings upon looking at the most magnificent city. Once again, both of them had realized how busy their lives were in such a vibrant world. That must be the imperial palace in a fairytale of their dreams, so why did it look so small and simple in their eyes? The ideas they had of a fairytale were being shattered.

San looked around and blinked. Biyeon touched the bridge of her nose. What went wrong? Was it the people from this place? Or were they the problem? Why was the fantasy of the imperial palace shattered? Where did the dream end?

Both of them stopped talking. They were immersed in their thoughts.

In their minds, images that were long forgotten suddenly played rapidly like still shots of a movie. A forest of high-rise buildings and flashy large displays; their world in which everything went by so fast that it hurt their eyes. Every second, every minute, every hour, the massive processed images shown by computer graphics…

Without a doubt, there were a lot of things to see in the world they lived in and it was very fun. Perhaps the system itself was a society that always had to compete in search of greater excitement.

Hello all! Nice to be a part of such a vibrant community and offer my humble services for this neat, original (at least to me) novel. A little background about me: I’ve lived in Cali nearly my whole life; my experience translating mainly stems from jobs I did...