While the news of Li Qiye bringing away a bunch of destiny stones spread everywhere, Li Qiye and Lan Yunzhu had already left the Metal Realm. Although there were a lot of treasures, Li Qiye didn’t want to spend more time here.

Lan Yunzhu went to look for some news and quickly came back: “I’ve found some new information. The lost mythical island you’re interested in is indeed at the Earth Realm.”

Li Qiye remained completely calm after hearing this since it was exactly as he predicted. Before, he was sure that the thing he wanted was inside the grave. Now that the lost mythical island was confirmed to be here, he was left completely at ease.

“How is the island right now?” He asked with a smile.

Lan Yunzhu replied: “I heard that it is no different from when it was outside at sea; it is still covered in mist. The mist has apparently become thinner, but one still can’t see the entire island.”

“I see.” Li Qiye knew that sooner or later, the island would reveal its true colors. Its appearance at the Prime Ominous Grave was for a reason.

“Do we go to the island now?” Lan Yunzhu inquired. In fact, she was already curious when they were together back at the Thousand Islands. She even suspected that the sudden appearance of the lost island had something to do with Li Qiye.

“No, it will take some time. We can only wait until the mist dissipates. If it is here, then it can’t run away. Plus, I have the Prime Ominous Key so time is on our side.” Li Qiye cheerfully replied.

Lan Yunzhu curiously asked: “What is on the lost mythical island? I heard people say that songs from immortal phoenixes and flying golden dragons could be heard. Could there be mythical beasts on the island or maybe weapons left behind by these creatures?”

“I’m not certain whether there are divine beasts or not.” Li Qiye smiled and narrowed his eyes: “But one thing is certain, there is something very heaven-defying on the island. However, it is hard to tell whether this something is good or bad. It depends on the person, really.”

“Just what is it?” Lan Yunzhu continued. She could see that Li Qiye was very interested in the thing on the island, and she knew that there weren’t too many things that warranted his attention.

Li Qiye looked at the far horizon with a serious look: “An existence.” He became quiet for a while and then continued on: “An existence that destroyed gods. Even Immortal Emperors were extremely wary of it.”

“Destroying gods and feared by Immortal Emperors!” Lan Yunzhu lost her colors and exclaimed: “Is there really such an existence in this world?”

“This is just my personal conjecture.” Li Qiye said with a smile: “It’s just a guess. If I’m not mistaken, then that thing is real and it has been sealed for a very long time. However, it is almost time for it to appear under the sun once more.”

“There is another piece of news.” Lan Yunzhu softly sighed and reported: “Rumor has it that the people from the Ancestral City are here. Right now, there aren’t too many of them — only a few came to check the situation. The Yin Yang Master and several Ancestral City Ancestors personally came. Someone saw them going to the lost mythical island to take a look.”

Li Qiye was not surprised at all and coldly grinned: “Hahaha, this is nothing surprising. They have heard of a few things and would absolutely not let go of this chance to participate in these muddled waters.”

Lan Yunzhu shared the same opinion. If the lost mythical island housed the existence Li Qiye was talking about, then the Ancestral City would not let it go.

“Where do we go now? The Fire Realm or the Wood Realm? Or should we go straight to the Earth Realm?” Lan Yunzhu regained her thoughts and asked.

“While I was asking for information, I heard that Master’s group was at the Water Realm. Since we are not in the same realm, it is hard to contact Master.” Lan Yunzhu replied.

Li Qiye stroked his chin and said: “The Water Realm… Very well, we will go take a look at the Water Realm. From my knowledge, it is not a bad place.”

Lan Yunzhu agreed since she also wanted to see if the Thousand Carp River had any luck. She followed him to a dao platform in the Metal Realm then directly ported to the Water Realm.

With its blue sky and sea that spanned endlessly, this was a realm worth yearning for. One’s soul would become relaxed while standing in the Water Realm; the gentle misty breeze could wash away the fatigue of life.

Lan Yunzhu couldn’t help but exclaim while standing above the water: “I didn’t expect the Water Realm to be one huge ocean.”

“This is a sea reservoir; below are many secrets that can never be excavated completely.” Li Qiye cheerfully commented.

The elders of the river sect were at the Water Realm, so Lan Yunzhu quickly communicated with them before running over to them.

When they met, the elders were all standing on top of a huge carp. They didn’t move separately and instead continued to stay together.

The huge carp swam quickly on the ocean as if the elders were chasing after something, prompting Lan Yunzhu’s question: “Master, what are you doing?”

A few high elders were gazing at the sea’s surface while their heavenly gazes swept across everything in this realm.

“Crash!” A huge splashing sound came out as a monstrous animal leaped out from the ocean, causing waves to tower up high.

A gigantic fish leaped out from the surface. Although the carp that the elders were riding was already very big, it was still smaller than this gigantic fish.

This leaping fish’s entire body was pitch black and its scales resembled black iron. When it jumped, the sunlight reflected off its body formed a faint halo. The curves of this fish appeared especially perfect under this sunlight.

When it jumped, it gave off the illusion that it was a true dragon leaping out of the water with an indescribable momentum, shocking all spectators!

“So pretty!” Lan Yunzhu had to praise this gigantic fish.

“Stay close and don’t lose it! We have been chasing after it for nine days now!” Daoist Bao Gui commanded.

“Crash!” The sound of splashing water continued nonstop. The gigantic fish sometimes jumped up and sometimes dived down while creating a big pillar of water. This majestic and beautiful scene dazzled one’s eyes. Its speed was very fast, but the river sect’s carp followed it without failure.

“The big fish is here again. Everyone, quickly give chase!” This fish that swam in the water had already alarmed many cultivators in this realm, so they started to follow it.

Prior to this, it was not only the Thousand Carp River that chased this fish, many other cultivators also followed, albeit with a slower speed.

Lan Yunzhu looked at its perfect curves and praised: “What kind of fish is this? Is it a Kun Peng?”

“No, it is a Diamond Carp.” Li Qiye looked at this jumping fish and spoke with admiration: “Very beautiful, a timeless beauty.”

“Young Noble recognizes this fish?” Daoist Bao Gui was filled with interest and said: “I had to read a secret scroll from the patriarch before finding out the name of this fish.”

“It is nothing much, I’ve only heard of it. This fish is unique in this world; I think one wouldn’t be able to find another outside of the Prime Ominous Grave.”

Li Qiye did not only know of the Diamond Carp, he had even chased after it before. It could be said that this fish carried a heaven-shaking secret.

“It is indeed the one and only Diamond Carp.” Daoist Bao Gui continued: “Just like you said, rumor has it that there is only one in this place.”

“Why is Master chasing after this Diamond Carp?” Lan Yunzhu asked: “Do we want to catch it?” However, she could see that they had no intention of catching it at this moment.

“No, we are trying to find its nest.” Daoist Bao Gui explained: “The secret book of the patriarch contains a passage about the amazing nest of the Diamond Carp, about how it contains a very rare creation of the heaven and earth. This is why we are chasing after it, we want to find its nest.”

“Do you know where its nest is?” Lan Yunzhu looked at Li Qiye and asked. Nowadays, Lan Yunzhu would first ask Li Qiye about anything. He even knew about the secrets of the grave, so she felt that there was nothing he didn’t know.

“I don’t know.” Li Qiye shook his head and said: “Just like what your patriarch’s record stated, we can only chase forever until we find the nest because this nest is always moving. The only thing we can do is wait till the carp goes back to its nest.”

“It’s quite impressive that Young Noble knows so many things.” Daoist Bao Gui couldn’t help but praise: “The patriarch’s record does indeed say that. We have to give chase until it goes back to its nest.” 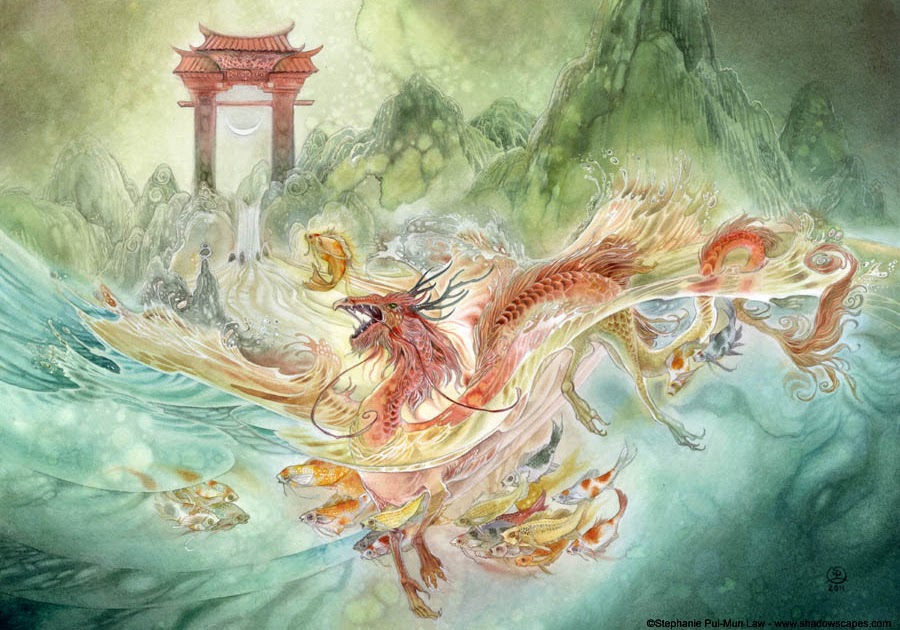 Couldn't find the perfect carp to match the next chapter, but I thought this picture was cool to show carps and dragons.[/caption][/spoiler]