Sikong Toutian and the Lion’s Roar Heavenly King would have nightmares from this event. This was too domineering; they had never seen a Fate Calamity get destroyed in one blow without even having the chance to fight back! Under this one spear, the Tiger’s Howl Ancestor, four ominous graves, and even the school’s ancestral ground became nothing in an instant.

“An Imperial Massacre! No, it had to be a Heavenly Annihilation!” A long time after Li Qiye’s group left, the people who were in a daze finally calmed down and exclaimed in shock.

“Heavenly Annihilation — the ultimate attack in this world!” Many looked at the ancestral ground that was now a dark crater, then they looked at the unerasable remnant in the sky. They felt their entire bodies become slowly drenched in cold sweat.

Even the spectating ancestors from the great powers were shivering since even they would die under such a blow!

However, they didn’t know that it was not a Heavenly Annihilation nor an Imperial Massacre. Li Qiye’s Immortal’s Blood Spear was neither a Life treasure nor True Treasure! It was just that this spear had once tasted the blood of an Immortal Emperor as it pierced through his throat!

Li Qiye took the group of Li Shuangyan on a journey to the Brilliance Ancient Kingdom. He was not willing to accept the escape of the Evil Subduing Rod; he wanted to seize it as the Realm God was attacking the ancient kingdom.

However, before he could reach it, a thunderous message spread across the Eastern Hundred Cities that left everyone aghast. “The Brilliance Divine Beast Protector has been slain by the Realm God! The ancient kingdom has surrendered!”

The Brilliance Ancient Kingdom — one sect with two emperors. This unshakable monster within the Eastern Hundred Cities had to surrender before the murderous might of the Realm God!

“The Realm God has shown mercy to the Brilliance Ancient Kingdom. The kingdom will pay ten times the losses the academy suffered last year and will declare a state of containment. They will never come into being again!” While everyone was still dumbfounded from shock due to the first piece of news, the second piece of news that was even more shocking arrived.

Everyone became paralyzed for a long time; an Ancient Kingdom had been defeated!

“The Realm God is too fast!” Li Qiye heard the news before they arrived and couldn’t help but smile awkwardly. Since the Realm God forgave the ancient kingdom, there was no chance for him to get the Evil Subduing Rod.

“The Realm God is too merciful.” Even the Lion’s Roar Heavenly King couldn’t help but say.

Sikong Toutian shook his head in response: “The Heavenly Dao Academy had always been like this. Also, destroying the Brilliance emperor foundation must not be so easy. It was very likely that the Realm God didn’t want to leave the academy for so long, so it spared the ancient kingdom.”

“Damn! Let us go, I have lost an Immortal Emperor True Treasure!” Li Qiye was quite annoyed and regretted delaying his first move. If he knew this was going to happen, he would have suppressed the True Treasure first before doing anything else.

The terrifying news regarding the ancient kingdom’s defeat and the destruction of the Tiger’s Howl School swept through the Eastern Hundred Cities overnight, startling countless people.

“This generation is over for the Brilliance Ancient Kingdom. Even though the merciful Realm God spared the kingdom, its Divine Beast Protector, all of its ancestors, and even the elders and protectors died in the battle! After just one fight, the elites of the kingdom were basically wiped out. Even if they sealed their kingdom for a generation, they would not be able to recover and will be on the decline from now on.” An ancestor who witnessed the battle with his own eyes spoke with his back still drenched in cold sweat.

The Realm God’s domination could even take down a monstrous existence with two emperors, so what other lineages dared to oppose the academy now?

During the time when people were still trying to cope with this news, on the second day, right outside of the Heavenly Dao Academy, a group of gray-haired old men all prostrated right outside of the academy. These were all famed existences, the ancestors of the great powers that were involved in the alliance that sieged the academy that year!

“The great powers’ ancestors who participated in that battle are kneeling right outside of the academy’s entrance. They’re ready to accept their punishment and are willing to commit suicide to make amends!” This shocking news quickly got out.

Even many students from the academy were unable to remain calm. These gray-haired old men prostrating before their gate were all apex existences that could look down with disdain towards Heavenly Kings. But today, they were all kneeling for forgiveness!

The fate of the Brilliance Ancient Kingdom scared everyone shitless. The great powers who participated in that alliance couldn’t do anything except admit their crimes; their ancestors were willing to kneel down before the academy and pay for all the damage the academy suffered last year. They were even willing to commit suicide as long as the Realm God agreed to spare their sects just like how it spared the ancient kingdom!

The other great powers were not comparable to a duel emperor sect like the Brilliance Ancient Kingdom, so opposing the academy was like throwing an egg at a stone. Ultimately, these ancestors didn’t dare to waste time on thinking. They all ran here overnight to kneel before the academy and beg the Realm God to forgive their sects!

The sheer amount of ancestors kneeling right outside the academy created a scenery that would render spectators speechless.

“This is how a man should be!” After seeing this scene, Chi Xiaodao, who managed to barely escape with his life, felt his blood boil.

Li Qiye smiled and said: “There will come a day when myriad races in the Nine Worlds come to pay tribute to me, and all the gods and devils shall prostrate before me.”

These overbearing words astonished the group of Sikong Toutian. It sounded so arrogant that it was almost to the point of being ignorant, but at this second, it was as if they could envision the scene foretold by Li Qiye!

After this heaven-shaking battle, the entire Eastern Hundred Cities was in a state of panic, especially those great powers who participated in the battle that year. It was as if a calamity was looming over their heads.

The Realm God sweeping over the Brilliance Ancient Kingdom in one night had scared many people witless; if an Immortal Emperor did not come out, there might not be anyone who was capable of fighting the Realm God.

Ever since the Black Dragon King fought against Immortal Emperor Ta Kong, there had not been an event as great as the decline of the Brilliance Ancient Kingdom. Even a dual emperor monster could fall before the might of an invincible existence, so no other great powers were safe.

It was not until four or five day later when everyone recovered from the shock of the ancient kingdom’s defeat did the destruction of the Tiger’s Howl School come into the view of many great powers.

“One wrong move from the Tiger’s Howl School costed them everything. They lost the inheritance that was accumulated bit by bit by their past ancestors.” After hearing the news, a person lamented with emotion.

At that time, Li Qiye had announced that the school’s name would be erased from the Eastern Hundred Cities. Countless people then sneered at his overestimation of his own abilities. However, those people were now regretting everything. Why did they feel the need to mouth off Li Qiye in such a manner? What if Li Qiye retaliated? Wouldn’t they become the second Tiger’s Howl School!?

In the eyes of many, the Tiger’s Howl School was finished, but there was still a chance for the Brilliance Ancient Kingdom in the far future. This generation was finished for them since they had to seal themselves, but their emperor foundation still remained. This was not the case for the Tiger’s Howl School. It lost its ancestral foundation, and moreover, even its White Tiger Great Vein had been sucked dry of its worldly essence by Li Qiye, so only ruins remained.

Although many disciples managed to escape, the loss of the ancestral foundation and the great vein had completely cut off all hope for the school.

A great power could come back from losing its elites in battle and also endure the loss of weapons and merit laws. After all, any great power could find all of these things in the future and train new personnel.

The ancestral foundation of a power was the embodiment of the effort of the past sages. It was the result of their blood and sweat of countless generations.

Fixing a destroyed ancestral foundation was even more difficult than reaching for the heavens.

However, what was even more disastrous was the destruction of the great vein. This was the real cause for despair. 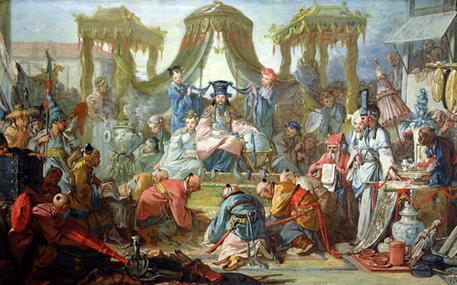