Triple Release May! Court Lady, Game of the Monarch, and Etranger!

Friends, in May we are welcoming three new releases on Wuxiaworld!  We have released Court Lady, Game of the Monarch, and the long-awaited Etranger.  Read on for more!

Court Lady: Court Lady is a very special novel, as it is the novelization of '骊歌行', a period drama/palace drama set in Tang Dynasty China by Huanyu Entertainment whom we have reached a special partnership with - we're releasing chapters alongside the tv episodes being released, so it is a simul-cast!  You can check out the drama series here on...

Beast Garden was inside the orchard - a paradise for sacred beasts. One could see them roaming everywhere.

In fact, sacred beasts weren’t one particular species, at least not the ones found here. They were unique and only found in Sacred Mountain.

Rumor has it that this garden didn’t exist at the mountain in the beginning. However, after the foundation of the academy, majestic light power gathered in this place.

Just like that, the birds and beasts already living here started to change due to the influence of the light. They gained this affinity and after reaching the right power level, they would actually learn the mind laws of this system and begin to cultivate.

That’s the origin of the sacred beasts. After a long while, the power of the mountain grew. This, in turn, attracted beasts from different places.

The mighty and ferocious beasts from other regions came and were eventually affected by the power of the light. They stopped leaving afterward and became sacred beasts themselves after the transformation process.

Just like that, the area slowly turned into the current paradisiacal Beast Garden.

The power of light made them extremely strong. A few beasts here have reached a level that could intimidate the emperors.

Nevertheless, students would come here each year hoping to capture a powerful sacred beast. Gaining a capable supporter would be akin to a tiger with wings.

Of course, it wasn’t easy to do so, not even for the Eternals.

There were ways to avoid this difficult task such as stealing eggs or kidnapping the baby beasts. This was arguably the better way to go about it instead of forcefully subduing an adult beast.

Because of this, one could see figures sneaking around in the valleys and mountains, aiming for the eggs and infants.

Once Li Qiye’s group made it here, they instantly felt the wonderful power of the light.

While back at the orchard, they also sensed this affinity. However, it was akin to silk strings existing all over the place. Here, they found themselves immersed in an ocean of the light.

This boundless light was different from the one back at the supreme tree. The supreme tree sent its light directly to one’s body - a forceful invasion for the sake of purification and an attack on the dao heart.

Here, this oceanic light power felt quite comfortable, akin to playing in the water and basking in the sun.

“So strong…” One student felt completely insignificant like a drop of water in the ocean.

“It’s not as domineering as the pressure under the tree but you all will be affected after a long time. You won’t want to leave just like the sacred beasts.” Li Qiye smiled.

The group exchanged glances. They thought that this light would be very beneficial for their cultivation. Nevertheless, staying here forever negated the advantages.

“Look, some sacred beasts over there.” They saw a deer drinking water by a stream and a white crane combing its feathers. [1]

Both of them looked different from the animals outside. They had a faint glow; their feathers and fur looked holy.

“These are the lowest-level sacred beasts.” Du Wnerui smiled and said: “They’re not fundamentally different from the cranes and deers outside.”

“This type will never leave this place, they don’t have the intelligence to know anything outside of just surviving here.” Li Qiye said.

“So there are sacred beasts who can leave?” The students became curious.

“Well, one example is that black bull earlier.” He answered while staring at the horizon.

“It’s that strong?” The group was surprised since they had no idea about the bull’s power and only thought that it was very mischievous.

“Not just that.” Du Wenrui shook his head: “Didn’t you all see how even Goldtypha True Emperor did not want to mess with it? In fact, he was very wise to do so. Plenty of beings stronger than him have been toyed with by that bull in history.” He revealed a bitter smile at this point.

“Dean, you’ve seen it before?” The group stared at him.

“This happened a very long time ago during my youth. So many prodigies weren’t convinced and wanted to mess with it. In the end, they came back with bruises all over their face thanks to its iron hooves.” He elaborated.

“Including you.” Li Qiye laughed.

The dean chuckled awkwardly without confirming.

The students became impressed, not expecting the bull to be so strong.

“Oh? Am I hearing praises of how awesome I am?” A voice came out of nowhere.

The bull suddenly appeared and raised its frontal hooves, trying to act cool like a stallion while flexing its muscles.

The students became startled and staggered backward with fear.

“Brat, what are you trying to do here? I heard you robbed the tree blind earlier.” The bull said.

“What if I do the same to Beast Garden too?” Li Qiye looked straight at the bull.

“Haha, I want you to do exactly that so that the bastard saint can stop benefitting.” The bull laughed.

“It’s being disrespectful…” One student said.

Desolate Saint was a supreme existence in the mind of these students. Their ancestors wouldn’t have a home without him.

“You’re from Repentance Institution, why do you care about Desolate Saint?” The bull heartily laughed: “If I was a student, no, a citizen of that city, I will curse that bastard for doing something like that. His light could reach all of Three Immortals yet he left a crappy place like Repentance behind? What’s the point? Is that how he wants to let the rest know how awesome his light is? Telling the descendants that only he can save the world? Bah, buncha bullshit, saint my ass. In my opinion, he’s the source of darkness!”

Li Qiye had made the young ones confused earlier and the bull continued to fan the fire at this moment. This might spell trouble for the foundation of the academy in the future.

“Forget it, I’m not gonna waste time with this crap.” The bull said with disdain: “It has nothing to do with me anyway, I’m not a member of Academy of Light.” It guffawed again.

“Where are you from then?” Li Qiye asked.

“Me? Hehe, my origin is heaven-defying.” The bull proudly raised its head up and said: “I am a true immortal visiting the mortal realm. I have traveled with the three immortals across the four oceans…”

It went on for a bit about its adventures without holding back. The students remained skeptical.

“Is that so? I can activate my heavenly gaze to see your real roots.” Li Qiye smirked at the beast.

“...” The bull stopped laughing right away and became awkward: “No, no need for that, I’m very busy, very busy.” It hastily fled right away.

1. Combing feathers is literal, but can a crane do this?

A powerful depiction of the Dark Hand from a fellow reader.

"Behold! The Dark Crow in all its glory!" - Saucy 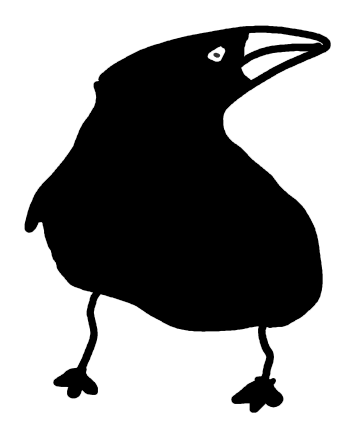